Writing Meaningful Songs: How to Make Your Lyrics Matter 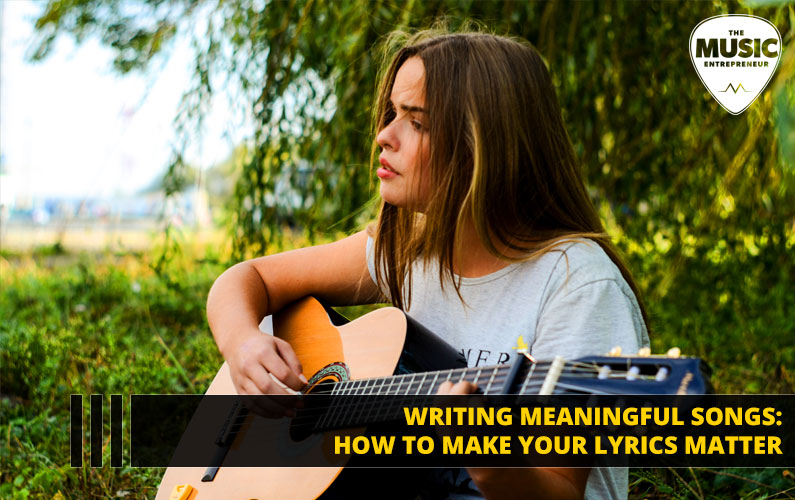 Lyrics play an important role in the songs you write. You can attract different audiences depending on what words you use and evoke different emotions too. That’s what we’re about to learn about.

Do you think you have something worth contributing to The Music Entrepreneur HQ? Read our submission guidelines here.

Now, let’s dig into the art of songwriting!

Writing lyrics that resonate with people can be one of the quickest ways to get on people’s radars. After all, it is the songs that you can relate to that are most likely to stick with you for the rest of your life.

Unfortunately, far too many people – famous artists included – have gotten rather lazy with their lyrics. So, while they may be able to produce short-lived earworms, these aren’t the kind of songs that are going to have any lasting power. Since you probably don’t have the kind of recognition or success that affords you this kind of luxury, you need to find a way to make your songs stand out in a crowd. So, here’s how you can do it:

Have you ever listened to a song on your music player and just experienced the angst, sadness, or hurt bleeding through the headphones? A great example of this is Alanis Morissette’s “You Oughta Know”, which quickly became the go-to break up song for youngsters all over the world. While the singer never revealed who she was singing about, there was no mistaking the emotion behind the words.

Now, you don’t just have to write from a place of anger or heartbreak – joyous emotions are just as much of a big seller. All that matters is that you have experience in the subjects that you are talking about. This lends an air of authenticity to your work. What’s more, you won’t have to work as hard to get the lyrics out either.

Write in the Moment

Following the first point, the best time to write an evocative song is when you are actually steeped in a particular emotion. Again, you don’t only have to write during a dark or depressive period – moments of happiness are great too.

The reason it is so important to jot down lyrics immediately is that emotions are fleeting. So, while you may be able to describe what you are feeling right now, there is no guarantee that you will be able to do it later.

And, once the moment has passed, you may not be able to capture those emotions as eloquently as you would have before.

Writing a song isn’t just about encapsulating an emotional reaction – it is also about creating a picture in the listeners’ head. Just take Led Zeppelin’s “Ramble On”, for instance. From the opening line, listeners are treated to some stunning imagery that only develops as the song progresses.

However, it is here that you can see that even truly great songwriters borrow from the geniuses who have come before them. In “Ramble On”, J. R. R. Tolkien’s The Lord of the Rings is referenced a few times.

The reason this is so masterful is that words like “Gollum” and “Mordor” are enough to recreate these epic scenes in the listeners’ head.

Led Zeppelin wasn’t the only band to do something like this, however. There were plenty of other bands that followed suit.

So, the next time you are characterless, you may want to flip through your favorite book for some inspiration.

When most songwriters or artists write songs, their main goal is to create a catchy tune – one that is bound to be sung over and over. For one reason or another, most lyricists equate this with creating as many rhyming lines as possible.

This only becomes a problem when you start forcing words together, just because they sound similar. By doing this, the writer often ends up losing the weight behind the words.

Incredibly enough, it isn’t just amateur artists who are guilty of this – from Bob Dylan to Neil Diamond, there are plenty of famous singers who resorted to this trick as well. You need to keep in mind that the story of the song is a lot more important than lines just sounding good together.

Have you ever noticed that when you are focused on getting lyrics down, all of your work sounds as if you have regurgitated long-lost epic poetry? This happens because you are only concentrating on the song sounding right instead of it having the right flow or even attaching too much meaning to the lyrics.

When you are in this rut, it is time to start free writing. This simply means writing whatever comes to mind.

Now, granted, at the end of this, you will find that most of what you have produced is either unusable or has no basis in reality at all.

However, in the midst of all this madness, you are probably going to find your hook. This is going to be a line or phrase that seems utterly perfect and will set the tone for the rest of the song.

The next time you sit down to write a song and want to create something that will appeal to you and your listeners, you know what to do. Just be true to yourself and your music, and the words should follow naturally.

Tracy Plunkett is a freelance writer and lyricist who has an enduring passion for music and cats, in no particular order. She has a particular interest in rock ‘n’ roll and blues history.