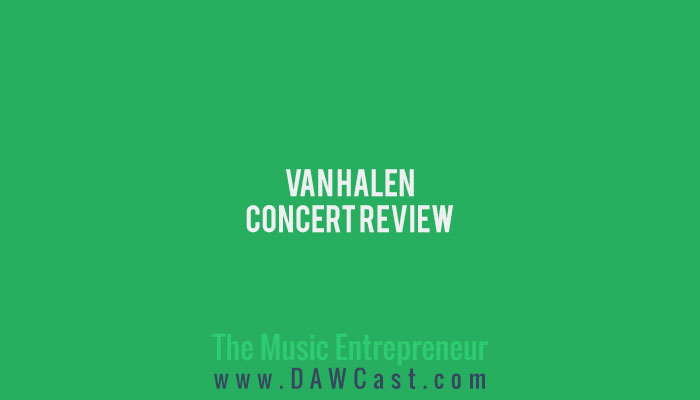 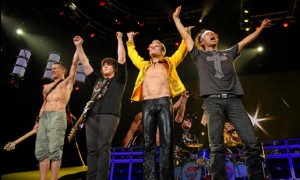 As we scurried through the cold into the Pengrowth Saddledome, I couldn’t help but wonder if maybe we were already late for the show. The show time printed on the tickets was 8:00 PM, and we barely made it to the dome on time. We breathed a sigh of relief to find an opening band already entertaining the crowd. This gave us plenty of time to grab some refreshments and find our seats. Unfortunately, even though they weren’t bad seats (we were on the far side of stage right), we weren’t going to be able to see the video screen.

Regardless, as we got seated, we astutely identified the opening band as “some reggae guy” (one of Bob Marley’s sons I believe), and they were playing semi-familiar cover tunes like “I Shot the Sheriff” and “No Woman No Cry”. Not bad, but really not my thing, and luckily their time on stage was short. By 8:30 the house lights went on again and the technical crew started preparing for Van Halen. This bought us a little bit of time to get more comfortable in our seats and visit the overcrowded washrooms as necessary.

Then the lights went out and the band hit the stage and greeted us with a barrage of classic hits. Guitarist Eddie Van Halen was situated in front of drummer and brother, Alex Van Halen. Young bassist Wolfgang Van Halen seemed comfortable on stage and was positioned on stage right. The stage was like a big black & white coffee swirl with an elevated section at the back – where vocalist David Lee Roth entered – with the other end of the swirl extending out into the audience. Roth, of course, was all over the stage, feeding off of the crowd and the band’s energy.

Eddie’s cream-colored guitar and khakis matched the overall look of the stage, along with his black & white 5150 amplifiers. Wolfgang was also primarily in black, with some white lettering on his shirt.

The concert atmosphere was like a big party, with everybody dancing along to their favorite songs. Songs like “So This is Love” and “Unchained” may not have grabbed the crowd the same way that “You Really Got Me” and “Panama” did, but it was still awesome to hear those songs, especially since some of them haven’t been performed onstage in a long time.

The night was overflowing with classic high-octane Van Halen material, primarily from the first few albums. I really appreciated songs like “Atomic Punk”, “I’m the One”, “Jamie’s Cryin'”, and “Little Dreamer”. Even if they weren’t big hits, they helped define Van Halen in a way that “Dance the Night Away” or “Jump” never did.

Of course, there were the usual sound problems at the Saddledome and even though I’m well-acquainted with Van Halen’s catalogue, there were a couple of songs I couldn’t immediately identify because of the muddy sound. This is a problem people have come to associate with the dome, and even though I think it’s entirely possible to achieve better sound in the venue, sometimes it’s just hard to hear what’s going on. But ultimately, it was negligible to the overall experience.

Singer David Lee Roth was full of energy, but he wasn’t hitting some of the high notes or shrieks he used to (or used to be able to). It was still fun to see the interplay between him and Eddie. Wolfgang did a great job of holding the high harmonies and even without Michael Anthony the sound of Van Halen was preserved. The average listener may not realize how crucial a part the backing vocals play in the sound-scape of Van Halen, and for that Wolfgang should be commended.

For “Ice Cream Man”, Dave came out with his acoustic guitar and it was just perfect. I wouldn’t have wanted to hear it any other way. Of course there were the obligatory drum and guitar solos as well, but no bass solo. And how important is a Rock bass solo in the overall scheme of things? Not really.

All in all it was an amazing concert, and though I would suggest getting acquainted with Van Halen’s back catalogue if you’re thinking about going, I would still recommend it to Hard Rock fans across the nation. The show proved once again how vital a guitarist Edward Van Halen is to Rock ‘N Roll, and how unique a player he is.