Ukulele Communities Are Popping Up Around The World 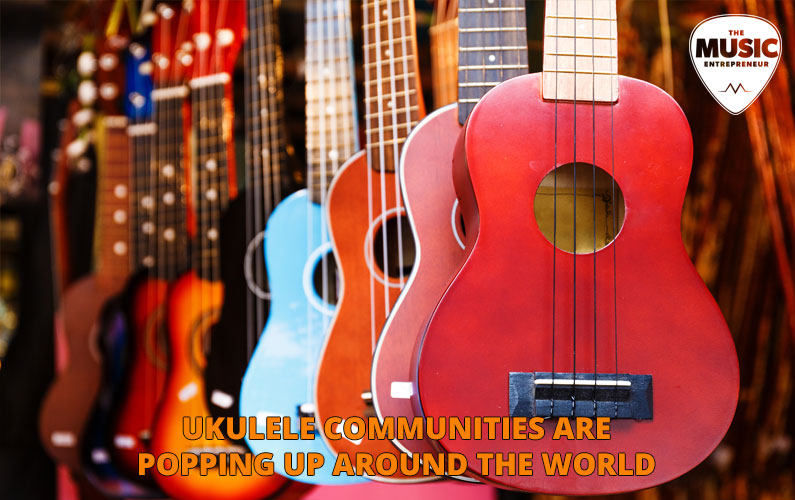 We have been hit with a ukulele wave!

Ukuleles are quickly gaining in popularity beyond their native origin of Hawaii. Beginner and experienced musicians are coming out of the woodwork across the globe.

Now, you can find specific ukulele communities, or entire festivals dedicated to ukes! There have been many waves of ukulele popularity, but the latest has been among the biggest.

The History of the Ukulele

This miniature four stringed instrument was first introduced to Hawaii in the late 1800’s by Portuguese immigrants. The Hawaiians fell in love with the instrument and named it ukulele (pronounced oo-ku-lay-lay), which means “jumping flea.”

In 1915, the ukulele craze hit San Francisco at the Panama Pacific International Exposition. Here, 17 million visitors were lured by the relaxed and carefree sounds of the ukulele.

One of the most popular songs, “On the Beach in Waikiki,” promoted the instrument, which exudes the carefree island life to ukulele fans across the nation.

Another wave of popularity hit in the 1950s when uke sales soared and big names started playing the instrument. We saw Elvis Presley with a uke in the box-office hit, Blue Hawaii. The ukulele was also strummed by television host Arthur Godfrey, who gave lessons to millions of viewers on his program.

Now, in the digital age, people are searching for a more acoustic feel to life, and as a way to “un-plug.”

Eddie Vedder from Pearl Jam won a Grammy for Ukulele Songs, where he accompanies himself on a sole ukulele.

Singer, songwriter, and actress, Zooey Deschanel plays a uke on screen and off. Deschanel says, “There’s something about guitars, they’re just so big, you know what I mean? You’re just like, ‘Ugh!’ It just seems so overwhelming. And the ukulele is, like, the opposite of overwhelming.”

We even see Ryan Gosling’s character in the movie, Blue Valentine, toting a ukulele on a date.

The Portability of Ukuleles

While the ukulele is growing in popularity, the size is smaller than ever. Ukes are known for being incredibly portable instruments, which makes them easy to travel with, or bring along when you want to jam along with friends.

The ukulele is less daunting to pick up in comparison to the guitar. With only four strings, instead of the guitar’s six, it’s easy to learn a few chords and start plucking away.

The New Wave of Ukulele

The latest wave in ukulele popularity has brought with it a number of ukulele specific communities and festivals around the world, from Las Vegas to Glastonbury, to Madrid to Malaysia, and Shanghai to Tasmania, you can join other likeminded uke players with the same passion and varying degrees of skill.

One of the best ways to improve is to push yourself to practice with other uke-sters. Here, you can learn new strumming techniques or new songs to master. It’s always a good idea to surround yourself with players that are just a little bit better than you. This will challenge you to keep up, plus make some new ukulele friends!

When you’re ready to take your ukulele playing to the next level, check out the many ukulele festivals that are coming up. Here, ukulele fans can strum together, listen to some of the best virtuosos in the world, and enjoy the relaxing, carefree music of a ukulele.

If you need a little ukulele inspiration, take a look at the ukulele virtuoso, Taimane Gardner. She has been taking ukulele fans by storm with her alluring dance moves and fast finger plucking. If you happen to be in Queensland, Australia, Taimane will be performing at the 2016 Cairns Ukulele Festival in August!

Colleen has a passion for guitars and ukuleles. She enjoys jamming, teaching, and getting others involved in music. Her website, Coustii, focuses specifically on guitars and ukes. Colleen loves to travel and uses her ukulele as a conversation starter on the road.