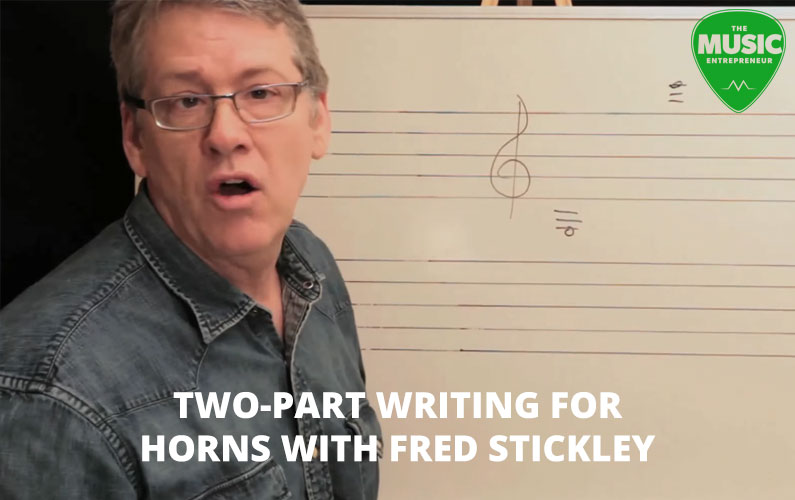 Hey gang! This video comes to us via Fred Stickley.

If you’ve ever wanted to write for horns, there’s some excellent information in his videos. I’ll be posting more of them here since he reached out to me with the idea of sharing them with you. Cool, right?

So, here’s Fred to take it away.

Good morning music lovers, and songwriters, and arrangers, and all you music folks out there. My name is Fred with FredStickley.com. Well, FredStickleyMusic.com, that’s my website.

The reason I’m here is I got to thinking the other day. I have written for horns, and I’m involved in three bands too. One of them has four horns – a horn section of four. My jazz group has a horn section of two. I know that a lot of people like horns. It’s really great. It’s great for your performance, your live show. They’re a lot of fun.

I started looking around the internet and I didn’t see a lot of information on horns. I saw some but not – I thought I could do a better job in showing you an easy way. Something not too difficult to incorporate horns into your group. I want to start small with two horns, which is very different from three, four, and five horns. Two horns is kind of its own animal.

So here we have treble clef. The trumpet can play down to an E and up to F and G depending on the player actually. Usually, I don’t write trumpet – high C, D, that’s as high as I go. A lot of times if I get up to around C and D, that’s pretty good. All that brilliant really nice high R&B stuff that you hear on trumpet will be above the staff starting at like F, G, above the staff. That’s where that real cool R&B sound. But don’t forget, trumpet sounds fabulous in the middle of its range. You can use the two horns differently depending on where the trumpet sits. Whether you’re going to use octaves or thirds or sixes.

I never write down to an E on the trumpet even though I can play that note. I don’t go any lower than like – usually Bb to up here is a good practical range. I don’t write above a D or a C. If I’m going to have them hold out a note, C, D, right in there. That’s plenty. I mean that’s why I haven’t pop a high note.

On the tenor saxophone, let’s do a bass clef. The tenor saxophone’s lowest note, I believe is an Ab and will go up to here’s middle C, and we’ll go up to an Eb. But I don’t write much more higher than a C, low C, middle C, to high C. That’s kind of where I like to write them. A little bit higher once in a while. Most of the time, especially if the trumpet’s playing up in its higher range, I just write octaves – sounds great.

When the band’s playing, and cranked up, and you hear the horn section come in, mainly you’re going to hear the trumpet up there and then the saxophone is going to support it quite nicely down on octave and that’ll sound big. I’ve written whole arrangements with just my horns, my trumpet, and tenor in octaves and it sounds terrific.

Also, very important to remember when you’re writing your arrangement, make sure all your chord changes are set because that’s going to dictate a lot of technicalities especially if you’re writing in harmony and things like that, you want to make sure you [know your] chords. And that’s usually more critical with jazz.

So, if my trumpet gets up here up high, like I said I’ll put the trumpet, the tenor, an octave down. If the trumpet’s mainly in the staff, doesn’t get too high like E, let’s say our trumpet plays… Like here’s a good scenario for our trumpet. Let’s say it’s playing Do Re Mi, and let’s say the chord is a C chord. Okay? All the white notes on the keys. He’s low enough and in a good spot to where it’s nice so I could write the tenor a third below so the tenor would play this A, B, C.

And there’s the egg timer. Now, I have my egg timer because if I don’t have – I set it to five minutes – I’m trying to keep my blog’s concise. If I don’t have any egg timer then I’ll just go off and it’ll be a half hour go by like that. So that is the end of our first session.

The other thing you want to remember when you’re writing for horns is you write – or a lot of orchestral elements unlike singing in a country western or a rock and roll band where you can put harmonies above the main melody or everything. With horns, you want the voice from the top down. So you figure out where your trumpet is going to be and then you’re going to figure out whether do you want that in octaves or harmony. Then voice down.

So, next time we’ll get more into that sort of thing. So, thanks for coming by. Don’t forget it’s Fred at FredStickleyMusic.com. I’ll put it on a lower third. Shoot me an email. I love to hear your comments. See you next time.