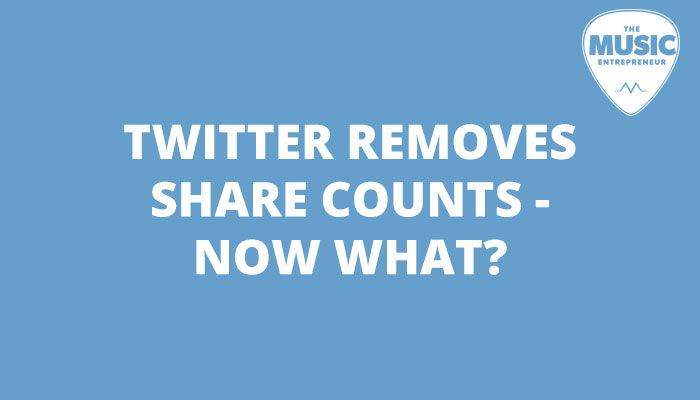 Update (November 30, 2015): upon further reflection, your main concern here is your own property – in other words, your blog, if you have one, and your Twitter button displaying share counts, if you have that. Large companies will likely choose to work with Gnip or use Twitter’s own REST API for the continuity of their tweet counts (boring and expensive technical stuff). These are not practical solutions for musicians, but it’s fair to say that they are well within reach for most big businesses. Other points suggested here are still relevant, which is why I’ve left the post more or less intact. It is also possible that some plugin developers will take advantage of Gnip or the previously mentioned Twitter API, in which case you can use those without any interruption in service.

I’ve been hearing rumblings of Twitter removing share counts from tweet buttons for a while. I just didn’t want to say anything until it was official.

It sounded pretty absurd to me, and even all of the experts I’ve been listening to didn’t seem entirely sure as to what was taking place (the news was initially announced on their Developer Forum when they could have issued an official press release or some such).

According to Social Media Today (link above), Twitter’s reasoning is that they want to prioritize which products and public APIs they want to invest in. The short version is that it would be very costly for them to move over to a new system and offer ongoing support for tweet counts.

But if you ask me, the technical aspect of things is bore snore. Besides, I don’t feel Twitter has been honest in sharing what their true intentions are.

The fact of the matter is that it’s not surprising for the second most popular brand or company – in any category or industry – to make some gambles along the way in an attempt to usurp the throne (which is held by Facebook in this case).

The far more likely reality appears to be that they either want to make more money, or they want to drive users back to their platform more often (which is what every social network is doing).

As I’ve said so many times before, any platform that isn’t your own is liable to change – especially social media sites. And this is my point: now that Twitter has removed share counts, what’s stopping other social networks from doing the same?

Why Does This Matter?

Well, the short answer is that “maybe it doesn’t.”

It really depends on your situation. Do you do a lot of blogging, and do you display social sharing icons on your posts? Do you sell products through Gumroad? Is any of your content on a site that displays (or used to display) tweet counts? Do you use Twitter for marketing purposes?

If you answered “yes” to any of these questions, then you are being affected.

Although tweet counts aren’t and never will be the be-all end-all of credibility – either in terms of products and services or individuals – they do tend to make a difference in perception.

If you don’t believe me, think of the last blog post you read. Did you look at the number of shares it had on Facebook, Twitter, Google+, etc.? Enough said. It did impact your decision to read or to take that post seriously.

3 Things To Do In Response

I don’t think this is grounds for quitting Twitter cold turkey, although you should at least have a backup plan.

Here are a few things you can do right now:

This isn’t necessarily bad news, but only time will tell how it will all play out. This could be part of Twitter’s bigger plan to offer a new kind of experience.

One thing is for certain: times are changing for publishers. Rely on the same old methods of yesteryear at your own peril.

With ad blockers growing in popularity, off-site publishing increasing in effectiveness, and social counters being eliminated, we must rethink the way we present content and earn money from it.

As for the music side of things – just remember that social networks can and do change on you. Don’t be naive and assume immunity.