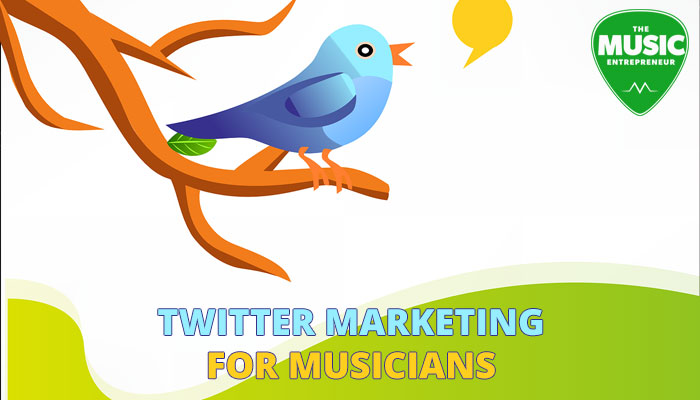 There is no doubt that people love to share their latest status updates with their friends on social platforms.

Enter Twitter, a micro-blogging platform that allows users to update their followers with new statuses as often as they like in less than 140 characters.

At its inception it sounded like a silly idea, but it caught on like wildfire. Today, Twitter is considered an important social media tool by bands, marketers, corporations, and celebrities alike.

In case you were not aware, there are even people talking about earning money using their Twitter accounts, so used correctly, Twitter can prove to be a powerful tool for musicians.

So let’s delve in. How can musicians take advantage of Twitter and use it effectively?

The first and perhaps most important consideration is what to put in the description box.

This is the first thing people see when they go to your Twitter profile. As such, it is crucial to take some time to come up with a description that is going to grab people’s attention.

Take a look at this simple guide to get you started: Twitter Marketing: How to Pitch Your Band in 140 Characters or Less

Bonus Tip: don’t leave the URL space blank. This is where your dot-com domain name goes. Don’t put your MySpace, Facebook, ReverbNation, SoundCloud, or Bandcamp link in there. Don’t bombard people with links in your description either. If you want to cross-promote, connect your Twitter account to individual social networking sites, and when you update from those sites, an update will be sent to your Twitter profile, and users can follow those links back to your various social profiles.

The next step in setting up your Twitter account is following other people. If you don’t follow anyone, there may not be many people following you back.

But this doesn’t discount the need to be strategic about this. Following people haphazardly won’t get you very far.

Brenna Ehrlich’s article on Mashable has some great tips:

That should get you off to a good start.

As the number of people following you grows, you will begin to reach more people with each of your tweets.

Publishing five to six tweets daily (ideal) lets people know you’re still alive, you’re still working on something, and you still want to connect with them.

Sound Citizen proposes some of the following ideas for what to tweet:

Don’t forget – social media is about connecting and engaging with people. It’s not a good idea to spam, scam, or publish useless and/or pointless content.

For example, if you have a contest, don’t flood people with the same tweet over and over again. Keep it to three times a day maximum.

Bonus Tip: if you happen to be a particularly busy artist/band, plan out your tweets in bulk or in advance using a tool like HootSuite. HootSuite allows you to schedule tweets months advance. You could plan out an entire month’s worth of tweets in one fell swoop and only have to do it once every month. Also see: How to Automate Your Social Media Marketing as a Musician