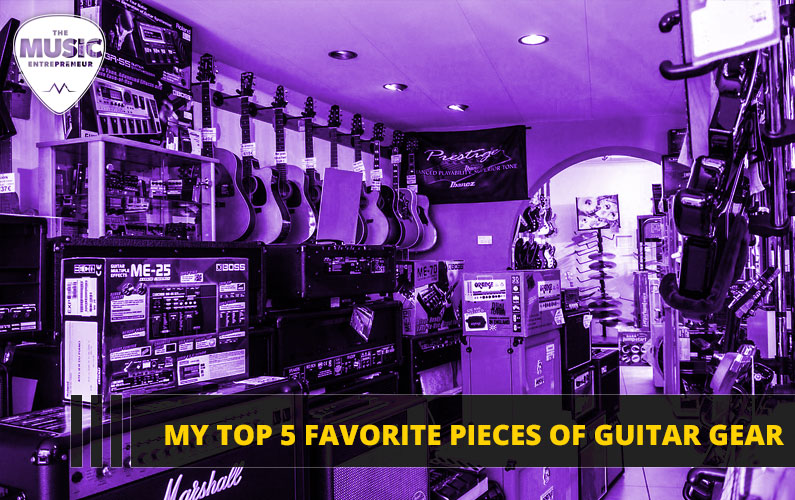 Note: This page contains affiliate links. If you purchase anything through these links, I will earn a small commission at no additional cost to you. Thanks!

Over the years, I’ve tried a lot of different guitars, amps, and effects units.

Many of those items never stayed with me. I ended up selling or trading most of them until I finally found what I felt were the ideal pieces of gear for me specifically.

Here are five pieces of guitar gear that have stood the test of time and have remained some of my favorites.

I was fortunate to have found my soulmate guitar early in my journey.

I wanted a guitar that felt and played great, sounded amazing, kept tune, had a whammy bar, and could be my go-to axe for rock gigs. I found all that and more in the Ernie Ball Music Man Axis.

To say that it does everything well is a misnomer. It’s not going to replace your Strat or Tele, or even your E335, which all have distinct tones that are perfect for certain musical situations. But if you’ve been looking for the perfect rock guitar, the Axis might just replace your Ibanez, Jackson, ESP, Charvel, Carvin, or Dean.

The Axis has a thick tone, characteristic of a dual-humbucking setup (it comes with two DiMarzio custom humbucking pickups). Roll off a bit of the highs, and you can get wonderful clean tones that would be perfect for jazz. Or, if you want it to break up nice, just boost the volume on the clean channel of your amp.

As far as distorted tones go, you can get everything from a nice classic rock crunch to all-out metal mayhem, depending on how you dial in the tone on your amp. Yes, you can achieve that classic Eddie Van Halen “brown sound” too, but not without matching up the guitar with the right amp (see the next piece of gear on this list).

By the way, I know the Axis might be out of your price range. Here are some great alternatives for kids or beginners on a budget.

I had read online that the 6505 was essentially the same amp as the 5150, and now that I’ve had the chance to play with it for a couple of years, I agree. You can easily dial in some of your favorite Eddie Van Halen tones with this amp.

Generally, this amp puts out a warm tone unless you crank up the highs and the presence. But it’s a nice kind of warm, and I find I only need the piercing highs for solos anyway.

Some amps are a little overwhelming with their spectrum of knobs, dials, and switches. The 6505 mini head also has its share of tonal options. But I feel like it’s just the right amount – any more than this, and I would seriously question its ability to produce a satisfactory tone.

The equalization knobs work much like they would on any other amp and are self-explanatory. The power amp dials will either boost your lows (resonance) or highs (presence) if you want to do some fine-tuning.

The amp also comes with reverb. I tend to leave this off or at a lower setting because I can always add reverb in later with my recordings, and as far as live performance is concerned, I generally run my effects from my multi-effects pedal.

I love using the 6505 as a recording tool – not just for those hard rock tones I love so much, but even for funk and blues tones. How it sounds is all a matter of the guitar and how you dial in your tones. This amp is highly flexible and capable of more than you might be inclined to think. I’m a big fan of the Mic Simulated Direct Interface for recording. It works perfectly.

A mini head needs a complementary partner in the form of a mini cabinet. I happen to like how the Orange PPC112 sounds with the 6505, probably because it comes loaded with my favorite speaker – the Celestion Vintage 30 (the 6505 cab, incidentally, comes with a Celestion Greenback).

It might seem like an odd pairing, since the head is American, and the cabinet British, but trust me – it roars!

The PPC112 is durable, lightweight (as far as one-speaker cabinets go), and it looks cool onstage. I have no doubt it would sound good with any mini head you powered it with, especially if you like classic rock tones. It isn’t the cheapest cab in its category though.

If people tell you that you need bigger gear for gigging, they’re lying to you. The 6505 and PC112 can put out a lot of volume, and most bigger venues probably have a sound tech that will mic you up anyway. To me, it’s all about the tone, and you can get an incredible tone with this stack, clean or dirty.

There are plenty of guitar multi-effects pedals out there, and they keep getting better and better. But you would still be hard pressed to find a pedal in this price range that not only does it all, but also delivers a killer tone.

I’ve used the Zoom G3X in a variety of settings, including:

Until I discovered the G3X, I was largely unhappy with every multi-effects unit I tried. This is the one that changed my mind about these types of pedals.

It’s also worth checking out the new G3Xn for more features.

A Canadian-made Gibson? Yes, it does exist. In 2007, Gibson purchased Garrison to expand its acoustic guitar offerings at the median price range. That’s how the Gibson Songmaker Series came about, and the CSM-CE is just one example of what they were able to achieve.

The CSM-CE is a comfortable size. It feels nice (about the only thing that would feel nicer is a guitar custom-built for my fingers). It sounds warm, dark, and deep, just as a Gibson should, though it still cuts when you need it to. And, the onboard Fishman pickup is no slouch either, making it a killer axe for live performance.

The guitar has solid spruce for the top, as wells as solid mahogany for the sides and neck.

It isn’t necessarily a remarkable guitar in terms of its features, but it is in terms of its playability and sound. There are better acoustic guitars out there, to be sure, but rarely in the same price range.

Unfortunately, the guitar has been discontinued, so you may have a hard time finding one, and even if you do, it might cost a pretty penny. Gibson doesn’t appear to be making more affordable acoustics right now, but the J-45 Walnut Avant Garde seems like a reasonable compromise.

I’ve used a lot of guitars and amps over the course of 16 years of playing. The above five pieces of gear have emerged as my favorites, though I still use and enjoy many others. It’s somewhat disturbing to think about all the purchases that were made, but when all is said and done, I learned from every piece of gear I bought and experimented with.

As with most things, it’s hard to know what you’ll like until you try it. The process of experimentation can sometimes be frustrating and costly, but still worth it if you emerge victorious in the end. It took me 14 years to find my ideal amp and tone, but I’m glad I went through what I did to get there.