The 5 Types of People You Need in Your Band 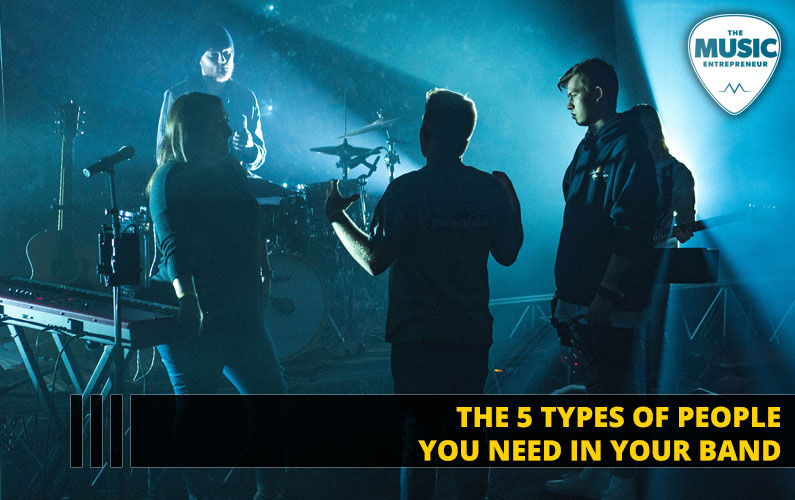 The seed of imagination and inspiration can grow from any mind – music often comes from the most unlikely, unassuming places.

You don’t need to have looked and acted like a rock star throughout high school to be a credible band member – nor do you need to have been an absolute recluse, forgoing a social life to live and breathe nothing but pure music.

But there are a couple of different – even mismatched, at first glance – personality types that, when working in conjunction with one another, can bring together every element your band needs for success. Allow us to introduce you to your team:

Any band that sticks in people’s minds has a distinct identity, and it’s going to be up to your Visionary to dream up and establish yours. From this brain unlike any other will come your band name, artwork concepts, sonic direction, even outfits or dress sense. Later in your career, the Visionary will be the one to create a legendary stage show to rival Zoo TV or the Wall, if that’s the direction they decide to take you in.

The Visionary is given to be an eccentric character – perhaps a little withdrawn, even socially awkward at times, and maybe not even that forthcoming with their more out-there ideas.

You’ll probably come across them performing some little-known B-side of a niche band at an open mic night, or find their mind-bending artwork on Instagram or Tumblr.

When your equipment fails and you don’t know a soldering iron from a regular iron, when you jointly invest in a state-of-the-art mixing desk that just looks like knobs and switches to your untrained eyes, or when you sit down at your computer and realize you don’t know the first thing about making a web page for your band, you’ll be glad you have a Tech-head on your team.

Technology is such a huge part of being a band these days, from the huge advancements in amp modelling to how people discover and consume music thanks to the advent of YouTube and Spotify, and you’re going to need someone on your team who can guide you all into the 21st century.

If your guitarist wants to run two pedal boards through different amps, or if your keyboardist wants to patch together a mad new sound on their synthesizer, but is staring blankly at a mass of cables, give your Tech-head a call. Or, better still, an instant message, as they’ll probably be on their computer.

No matter how talented you are as individuals and as a unit, it’s not going to count for squat unless you can get yourself out of the basement and onto the gig circuit. And you can only rely on trains and buses to get you so far – they probably won’t be taking you right up to the venue, and you don’t even want to know the hardships of trying to handle a drum kit on public transport.

No, your lives will all change for the better as soon as one of you elects to become the band’s resident chauffeur. You can travel at your own pace, park as close to the venue doors as possible, and in some extreme cases, have somewhere to spend the night.

The Getaway Driver, through their own generous reliability, may start to take on something of a parental role within the band. The Getaway Driver must not be taken for granted, however – if, after every show, you get them to take you cruisin’ for a boozin’, they’ll start to feel left out sipping their Diet Coke.

In the early days, it’s likely that not everyone in the band will have their own vehicle, but as time goes on (and some semblance of maturity sets in), you’re going to need to give them their turn to let their hair down and be irresponsible. It’s like buying your dad a pint on your 18th.

Your Getaway Driver will most likely be someone you or another band member has known for a long time, and would trust them with your life. Do not squander their friendship – your lives could well depend on it.

A musician who on the surface may seem entirely ordinary, the Secret Weapon secretly harbors some show-stopping skills.

They could be a light-speed shredder of a guitarist, capable of busting out Eruption-style solos at a moment’s notice, or could boast Bonham-level bass pedal mastery – whatever their forte may be, they’re be an unprecedented powerhouse of a musician who can hold their own against any experimental jazz or tech-metal adversary they encounter.

The key to keeping your Secret Weapon a secret, at least while you’re still winning over fans, is to not overuse them – let them hint at their brilliance, but don’t overdo it. People will come to your shows expecting to see them do something great, which presents two fatal issues: they might not care about the rest of you as much, and they might get desensitized to it.

But when they do strike, they strike hard enough to blow the heads off of everyone within a five mile radius. You may not know a Secret Weapon to look at them – if you suspect someone of being a covert virtuoso, keep an eye out for their YouTube channel, or listen under their door at their local practice place.

You need to walk the walk as a band, but you need someone who can talk the talk. This will more often than not be your vocalist – the one with 24/7 microphone access, who addresses the audience through song and speech, and who can articulate in no uncertain terms to interviewers exactly how you plan to take over the world.

The Mouthpiece is the embodiment of the Visionary’s dream, so it’s essential that they’re singing from the same hymn sheet. They’re like fire and ice, the yin and yang, the extrovert and introvert of your band: together, they have the makings of something truly great.

You need the silent, smouldering genius to reach deep inside of themselves and pull out something the touches the soul, but you need the fun-loving life and soul of the party to get people to pay attention and believe in your message too.

They may not take to each other at first, mostly due to the Visionary’s inability to speak up and the Mouthpiece’s inability to shut up, but once they learn to trust and respect one another’s methods, you’ll all find that things start to progress rapidly. You’ll most likely hear your Mouthpiece from miles away – they may take a bit of convincing at first that your band is worth their precious time, but once they’re in, they’re in for the long haul.

When putting together your band, it’s important to think not just in terms of having good chemistry, but also who can bring something unique to the table. If all of the above personalities can’t be found in your band, then perhaps building a team around you is the way to go. Your only other option is to adopt certain personas based on what’s a best fit for everyone invovled.