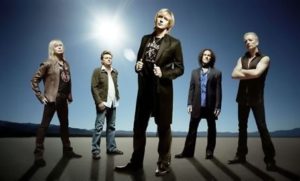 This has been the year of concerts for me. It seems like all of the great bands (or maybe just some of my favorites) are making their way into Calgary.

The first concert I attended was Van Morrison in February. In July, it was Rush and “Weird Al” Yankovic. Then in August I attended the Blues Festival where among others, Edgar Winter, Rick Derringer and Albert Cummings performed. I’ve had the pleasure of witnessing some truly great performances thus far.

On September 30, I went to the Styx & Def Leppard show. My expectations were high for the night, especially for Def Leppard.

When Styx took the stage, they came out with a lot of fire and soul. The band was tight and very entertaining. Lawrence Gowan was lighting up the stage, playing keyboard behind his back, singing passionately, switching things up on guitar, and generally keeping the crowd’s attention with his antics.

The rest of the band was taking solos, changing instruments ever so often, and sharing vocal duties. Sadly many of the original members were not represented, but I don’t think the performance suffered any.

After their final song, they threw a ton of guitar picks, Frisbees, and several beach balls into the crowd. What more can I say? The band had an amazing stage presence, and what I once thought was a disposable 80s prog-tronica band (think “Mr. Roboto”) completely blew me away.

My expectations for Def Leppard grew. Sadly – and I think this was mostly due to technical problems and bad sound – they didn’t quite meet my expectations.

Joe Elliott’s vocals were muffled and muted throughout. The band had a lot of energy, a ton of hit songs to play (obviously), some minor video embellishment, and a decent amount of stage presence.

Still, the connection with the audience was lost in translation. Again, this probably had little to do with the actual performance because the band was clearly doing their job.

On some familiar songs the sound was so bad it was hard to tell what song they were even playing. Guitars were boosted for solos, but it seemed excessive. What occurs to me about Def Leppard is that they’re all about balance.The dual guitar attack, the four voices, the five-string bass… In every respect the band requires perfect balance, which just wasn’t there.

Regardless, I would still highly recommend seeing these bands on tour. It’s a really great pairing. Naturally, there are bound to be some discrepancies from night to night, and I suspect that given the right circumstances and conditions Def Leppard would be better than the night I witnessed them.