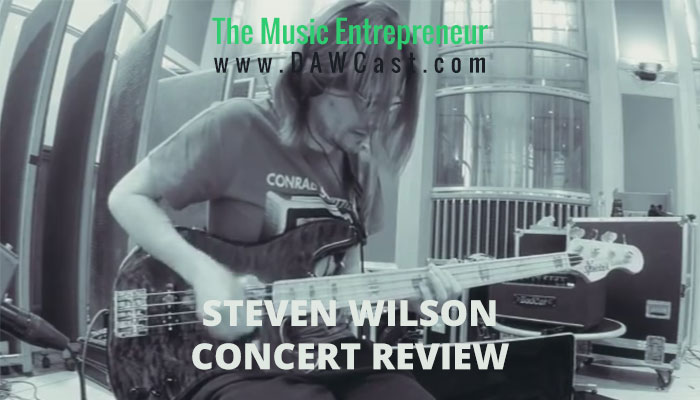 If you were to imagine a spectacled, long-haired, forty-something man that looks more like he’s twenty-something, loves 70s progressive rock bands like King Crimson, XTC, and Yes, and continues to write and perform prog-rock today, what do you think he would look like?

Well, you don’t have to imagine, because his name is Steven Wilson, formerly of Porcupine Tree, and he was performing at MacEwan Hall at the University of Calgary, yesterday, on June 23, 2015.

I will be the first to admit that I am not the most knowledgeable person when it comes to Steven Wilson or the progressive rock genre. My friend Patrick Zelinski invited me to check out his show in Calgary, and after hearing a few samples, I knew that it was something I would be interested in.

As an aside, I knew a little bit about guitarist Guthrie Govan who had a hand in Wilson’s latest album Hand. Cannot. Erase., and that probably played a part in my willingness to stretch my music muscle, though Govan was notably absent from this show (more on that later).

As for prog-rock, I am a fan of bands like Rush, Saga, Yes, and on a local level Diatessaron among others. In short, I didn’t think I would feel terribly out of place at a concert whose audience was sure to be made up primarily of musicians.

Patrick and I arrived at the venue around 6:30 PM, a full half-hour before the doors were to be opened. People were already standing in line, eating last-minute suppers, watching the monitor displays that rotated upcoming performances at Mac Hall, and discussing all things music.

Patrick managed to snag our tickets early, which meant that we were offered priority seating. As it turns out, there were separate lines for those who had earlier versions of the tickets, and those who got their tickets later.

In due course, we figured out that we needed to move over to the other line, where they called out attendees row by row. I think they could have done a better job of announcing these things, but that’s just a Japanese-grown Canadian talking. I generally take issue with North Americia’s utter lack of direction, training, instructions, and so on.

In any case, Pat and I were not too late to the game, and our row was called in fairly short order. We went into the venue and found some great seats facing stage right – which would be occupied by bassist Nick Beggs – not too close to the front, but not too far from it either.

On the digital displays outside of the venues, the ad had us thinking that there would be an opening act. However, as we took our seats, it became pretty apparent that nobody besides the band and their tech would be going anywhere near the abundance of gear onstage.

Sure enough, the band went on at 8:00 PM, preceded by a video showing… apartment buildings. Video plays a significant role in Wilson’s live show – a fact long-time concertgoers would probably be familiar with – and though the intro video didn’t exactly wow anyone, it started to take form as the band took stage and started building up to the first song in the set.

At first, Pat and I were not aware of the member changes. Evidently, guitarist Guthrie Govan and drummer Marco Minnemann left at the end of the European tour to fulfill their commitments to their own band, The Aristocrats. Govan was replaced by Dave Kliminster (who played in the Roger Waters band), and Minnemann by Craig Blundell.

Both Kilminster and Blundell performed admirably. In fact, I don’t think Govan’s absence was that significant. Felt, a little, but not sorely missed.

The same cannot be said for Minnemann. It’s not that Blundell did a bad job by any means; he definitely kept the beat in check. However, he did not display the same technical comfort and prowess Minnemann is known for.

Prior to this leg of the tour, there were rumors that Chad Wackerman would be filling in for Minnemann, and that would have been something to see, but alas, no.

Despite these changes in personnel, every band member held their own and seemed comfortable in their roles. Some of the best moments came courtesy of keyboardist Adam Holzman and the incredible solos he played throughout the set.

Wilson’s stage presence was surprisingly comfortable and polished. He might strike you as someone that keeps a serious, business-first approach, but he cracked a few jokes throughout the show (there might have been a little condescension at work here, but we still had a laugh), moved around during songs, and signaled musical changes to his band mates through various gestures.

The overall sentiment appears to be that Wilson is a conductor and orchestrator onstage. By his own admission, he’s not as talented as his band members, though that sentiment probably isn’t held by his audience. During performance, his talent is clearly on display as a songwriter, a composer, a singer, and even as an instrumentalist, where his band mates might have a proclivity to outshine him at times.

Wilson’s set list was fairly diverse, pulling material from earlier solo albums as well as Porcupine Tree favorites. Since Hand. Cannot. Erase. was fairly conceptual in nature, some surmised that he might stick to playing material exclusively from his new album to retain an authentic feel, but fortunately he took some wonderful detours along the way.

The concert didn’t seem to suffer any. The videos still held conceptual relevance, and the variety of material kept the concert engaging. Variety isn’t always a given with the prog-rock genre, but the scope of the show spanned from outright dissonance (which was still enjoyable in its own way), to absolute melodic bliss, which meant that our interest was held.

Admittedly, neither storytelling through music nor synchronizing your performance to video footage is easy to do, but that’s what makes the band’s comfort level all the more commendable. It really came together.

Yes, even a musician like me – who would rather be onstage than watching someone perform – derived some enjoyment from this concert.

Not to harp on the same points, but it would have been great to see this band with Minnemann or Wackerman. Blundell did great, and doubtless he has more to offer than we can see on the surface, but I didn’t feel like we were getting the same Steven Wilson experience that other worldwide audiences were getting.

At the end of the day, however, this concert is still worth it. If you’re a musician, or if you just like Steven Wilson, this show will undoubtedly satiate your prog-rock appetite for a while.