Sometimes the Opposite is True (Refinement) 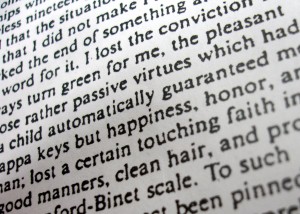 I recall sitting in my grade 10 English classes wondering why the friend sitting next to me got 70% on his essays while I kept getting slightly above 50%.

You have to understand that even in grade 10 I was already getting to be a pretty decent writer. Up until I was 13 I attended school in Japan, so grade 10 would have been my second full year of school in Canada.

Even then, I had spent so much time developing websites and writing copy that I was starting to get a pretty good handle on the English language. I can remember studying and memorizing words straight out of the dictionary and thesaurus voluntarily. Suffice to say, I was a little perplexed by the 50% essays.

I asked my friend how he was getting 70%, and he said something really interesting: “I just summarize the story and I get 70% every time.”

Huh? Wasn’t that exactly what the teacher said not to do?

I was determined to prove my worth and tried to get above 50% doing things my way, but you know what? It never worked.

I was passing to be sure, but I didn’t have the best grades in grade 10 English, so I was advised to take English 23 in grade 11, unsure of what I was doing wrong.

My English 23 teacher was easy to please, and I got great grades. There was someone else in the class who was still doing better than me (which I didn’t totally understand based on all the compliments I kept getting from my teacher), but I decided at that point that I wanted to upgrade my English and go the 20-30 route (the 23-33 route would have been easy English).

In order for that to happen, I had to get counsel from my English 23 teacher. He said that if I wanted to do it, I had the grades to do it, but that I couldn’t expect to do as well if I took the 20-30 routes. I decided to do it anyway.

Of course, he was partially right. In English 20, I got about 70% overall, compared to my above 90% average in English 23. However, that extra time spent in English 23 proved to be beneficial.

Care to guess what I got on my final exam for English 30?

know what you’re thinking. You’re thinking that I just went against my programming and summarized the story, right? Well, you’re partly correct.

See, I realized that summarizing the story or article served one purpose; it demonstrated comprehension. If you were adequately able to use your own words to sum up what you just read, it showed that you understood the article. However, that in and of itself would not get you 100% on your essay (my friend kept getting 70%, remember?).

Speculation turned out to be another key component. In other words, the essay topic usually had some cloudy areas that would be left to the reader’s imagination. Pointing these out, theorizing about them, and, well, being considerate of the grader (that’s kind of a nice way of putting it) would bump you up above those who just summarized the topic.

The Moral of the Story

There’s really two parts to this: first is that sometimes we tend to listen too closely to what other people have to say.

Had Jimi listened too closely to his critics, he might not have become such a pivotal figure. All too often, blanket statements get thrown around in mentorship and instruction: “don’t do this”, “never try that”, “always make sure to do this”.

Sometimes this can be a detriment to one’s perception of reality. If you’re experiencing mental blocks about a particular situation in your life, you may need to reevaluate those do’s and don’ts that have been ingrained in your mind.

Conversely, I do believe that teachability is a great quality to have. However, you have to make sure you’re listening to the people that actually have the results you want.

The second moral is that mastery and success requires refinement. Failing is a necessary part of building towards success. Trying and failing is good; learning from those failures is even better.

Filed Under: Creativity & Inspiration Tagged With: failing is a necessary part of success, Jimi Hendrix, learning from failure, refinement, trial and error