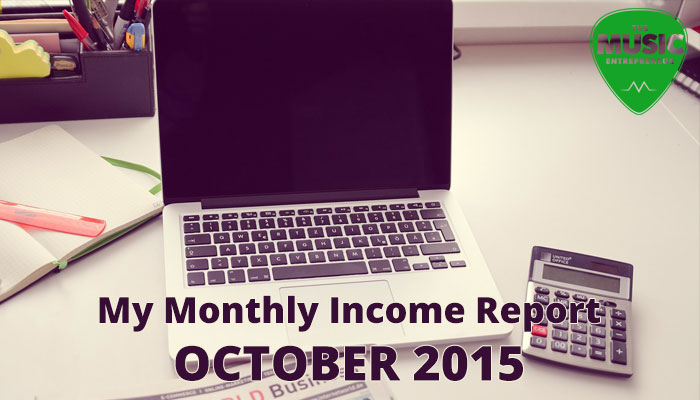 It’s November, and yes, it’s time for another income report.

This one kind of snuck up on me, because both the months of October and November have presented some interesting challenges – and oddly enough, they happened more or less simultaneously.

I already talked about one of them on the podcast – playing an out of town show at a bar and not getting paid for it. Unfortunately, this is an all-too-prevalent problem with managers and bar owners that refuse to keep agreements for arbitrary reasons (I’ll be sharing more about that in the near future).

In the midst of that, my websites went down for several days. My web host didn’t contact me or do anything to help me during that time, and when I did call technical support, they weren’t of much help either.

Their theory was that one of my websites had been hacked, or that a WordPress plugin had gone haywire. I didn’t uncover any evidence to suggest that either contingency was true.

And they even pointed me to one of my domains that I haven’t been using at all and said, “this one seems to be reporting heavy server load.” I deleted it, because I wasn’t using it, and guess what? It didn’t solve the slowdown one bit.

Not only did they fail to do anything on my behalf, even their suggestions were half-baked at best.

Look, I’ve had my fair share of ups and downs with web hosts, so I’m not going to spend any more time whining about it. It just sucks when you have to add one more thing to your week when your to-do list is already full.

Fortunately, transferring The Music Entrepreneur website (the site you’re looking at right now) over to a new host was almost entirely painless. I couldn’t believe how fast and how easy it was.

Plus, that seems to have solved all of my “server load” issues, at least for the time being. All of my sites are loading faster now.

Anyway, you’ll be happy to know that I’m finally starting to see reports coming in for my new eBook, and of all the products I’ve created, it’s the best selling one I’ve created to date. This will definitely inform my strategy moving forward.

What’s not so happy about this is that I’m not going to be sharing how much money the book has earned me – yet.

Here’s my simple reasoning – my math isn’t that great. I only get cheques when I make $100 or more from my eBook (so you know I haven’t earned $100 yet – at least not between the book’s initial release in June and August 15).

So I’m going to make this easy on myself and report how much money my eBook makes when I start receiving payments (instead of just reports). That way I won’t pull in past statements by mistake and report inaccurate numbers. Does that sound fair?

Cool. So let’s get into those October figures.

This month’s figures aren’t the most exciting you’ve seen to date. This is mostly due to the fact that I didn’t have any live performance income, for reasons already covered.

And although there have been a lot more downloads of my free and/or pay-what-you-want resources, there haven’t been any freewill donations in the last month or so.

One item you haven’t seen on this list before is freelance video editing, so that’s probably the most exciting thing about my October income.

Of course, there are some other caveats and stipulations. I want to encourage you to check out my first income report, which outlines what these numbers really mean.

Although it looks as though October was my smallest producing month yet – it really wasn’t. It’s just that my music income was a little less, and my income in other unreported areas was a little higher.

Additionally, if I was actually paid for that out of town performance, this statement would have been on par with last month’s. Now that I think of it, there’s also a substitute teaching gig that I haven’t been paid for yet either.

Either way, I hope you can appreciate that there is always some fluctuation, and that I make money from music in a variety of different ways.

If you enjoyed this, I want to encourage you to check out last month’s income report too.