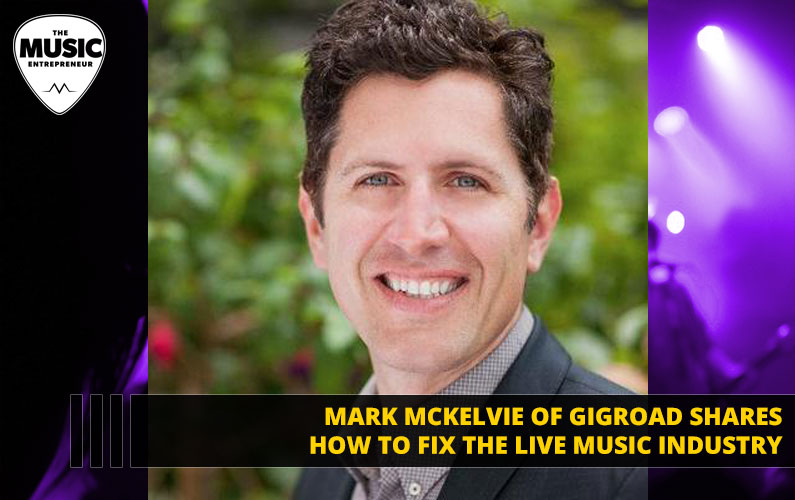 Many musicians get into music and stay in music because they love the thrill of live performance.

But booking gigs can be time-consuming and difficult. It’s hard to find good help,

I recently had the chance to ask Mark Mckelvie about his project known as Gigroad, which proposes to create the best live experiences possible for both the artist and the fan.

Here’s Mark to answer my questions.

1. Tell us about who you are and what you do.

My name is Mark Mckelvie, and I created Gigroad to fix what’s gone horribly wrong with the live music industry. As I see it, there are two major issues:

2. What is Gigroad? How does it benefit artists?

Gigroad is something like Airbnb for concerts, connecting artists with fans and places to play. Venues on Gigroad may be professional, but they may also be just about anywhere, which enables artists to create gigs in towns that may not have many professional venues. Fans can literally provide the venues, opening up a much broader spectrum of possibilities for artists to share their music.

Artists and “venues” from the 25 countries Gigroad supports can easily connect and create gigs; deciding the details of each gig before it goes on sale. The showtime, ticket price, profit sharing for all participants, keywords, etc. are all editable on Gigroad. Gigs, artists and venues also have a private chatroom where they can hash things out. Because Gigroad makes it so easy for artists and venues to create gigs, an artist can easily set up tours on the fly, travel around the world, creating concerts and sell tickets as they go. What better way for artists to share their music while funding the trip of a lifetime?

3. How will Gigroad enhance the fan experience?

Gigroad enables fans to be directly involved with the artists they love, and make money doing it. Many fans have somewhere they can host music, even if that somewhere may not have been thought of as a possible venue before. No matter what the space is, there is bound to be an artist who can create a great live experience there. Backyards, garages, even street corners can be “venues”… the concert possibilities are endless.

Gigroad enables fans to be directly involved with the artists they love, and make money doing it. Click To Tweet

Also, buying tickets on Gigroad is super easy. Gigroad accepts Apple Pay and all the major cards, making buying tickets simple, fast, and secure. Tickets are kept on your phone, and the host of the gig scans your phone at the door. That’s it! Multiple tickets can be bought for friends, so an entire group can get in with a single scan. Tickets also can be easily refunded up to 24 hours before showtime with no hassle and no service charges.

4. What are some unique ways artists can use Gigroad to promote their music?

Firstly, gigs, venues, and artists on Gigroad can be conveniently shared on Facebook, making promotion to social media super easy. Also, if artists film their gigs and send Gigroad the raw footage, we will be happy to professionally edit the video and post it to all of Gigroad’s media pages, including Facebook and YouTube. The professionally edited video will also be provided to the artist free of charge to be shared by them as well.

At the heart of Gigroad lies collaboration between artists and fans, especially because fans have the power to host the artists themselves. Through directly involving fans in the music creation process, a bond is forged that is difficult to match in any other way. What could be a better way for an artist to promote themselves than making the fan a partner in a creative experience they will never forget?

What could be a better way for an artist to promote themselves than making the fan a partner in a creative experience they will never forget? Click To Tweet

5. Is there anything else I should have asked?

Hmm, how about, who’s the greatest American rock band of all time? Well, since you didn’t ask…The Allman Brothers Band! Really! Put on Live at Fillmore East, and tell me of another band who can do that!

Thanks to Mark Mckelvie for sharing his perspective on what’s wrong with live music, and how he intends to fix it. I hope you enjoyed this interview, and you’re starting to think about how to incorporate Gigroad into your career efforts.

If you enjoyed this interview, please take a moment to thank Mark on Twitter: @markmckelvie

And, as always, if you have any questions, please share them in the comments section below.