Marianas Trench at the Calgary Stampede on July 7, 2014 Concert Review 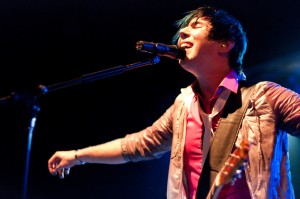 When I saw the lineup for this year’s Coke stage performances at the Calgary Stampede, there were two acts that immediately jumped out at me.

The first was Marianas Trench, who’ve earned my listenership through catchy melodies, a willingness to experiment with conceptual albums, and a strong vocal presence. The second was Billy Talent, who I may still have the opportunity to see, time permitting.

But, if I had to choose one, it would be Marianas Trench. I’ve listened to both Masterpiece Theatre and Ever After pretty extensively, to the point where I’ve learned most of the lyrics by osmosis. Additionally, it’s a lot more fun to see a band that you can sing along with.

I knew that the Trench would be hitting the stage at 9, so my plan was to leave my house around 7:30 to get down to the Stampede grounds. Unfortunately, unforeseen circumstances came up, and I couldn’t leave until closer to 8.

I caught the train down to the grounds, and arrived about quarter-to 9. This wouldn’t leave me much time to snag a good spot by the stage. Little did I know how true this statement would turn out to be (Josh later said that this was the third time the Trench broke attendance records at the Stampede).

I paid my $16 entry fee to get in. That seemed more than reasonable based on rumors of price hikes. As I approached the stage just passed the entry gates, I saw a sea of people waiting for the show to begin.

Not surprisingly, the majority of concertgoers were quite young. However, there were also twenty-and-thirtysomethings, and of course parents in the mix too.

There were workers ushering people to go around the stage to the other side, which I had to do to find a spot with a good view of the stage.

Fortunately, though I did not find a space within mosh pit distance, I did find a vantage point from which I could observe most of the stage. Based on volume levels, I’m glad I stayed there.

As 9 o’ clock approached, time seemed to halt to a standstill. Every minute felt more like an hour.

Of course, no band starts right on time, and the wait continued even after the clock struck 9. But they didn’t keep us waiting for long, and the concert began.

The Trench’s opening number, as expected, was “Ever After”, quickly followed by “All to Myself”. The crowd enthusiastically sang along to both of these familiar hits, as did I.

Oftentimes, there is something that takes you right out of the concert experience in the early stages of the show (I remember seeing Collective Soul at the Coke stage, and vocalist Ed Roland clearly wasn’t warmed up). With Marianas Trench, it was fairly apparent that we were in for a great show, but if I were to make one minor nitpick, Josh’s vocals were a little quiet.

I assume that this is because he is a fairly dynamic singer that goes from soft-and-smooth falsetto to all-out growl. However, there should be some way of coping with his dynamics, either by applying compression, or maybe even old-fashioned fader-pushing. That is the role of the sound tech, right?

And, just so there’s no confusion, overall the sound was fantastic throughout, and they did boost Josh’s vocals a little bit later on.

Regardless, the band was sounding great, and nothing sounded markedly different from their recordings. What this tells you is that they didn’t get overly ambitious in the studio, trying to pull off things they could never do in a live setting.

As the band continued to churn out the hits, I began to wonder if they had any surprises in store for us. Besides Josh’s vocal improvisations, the band played faithful renditions of their material, rarely straying from the original sound of their songs.

I do have to admit, however, that I was surprised at how “Toy Soldiers” turned into an all-out rocker in concert. The recorded version isn’t a mellow tune by any means, but the live version was huge by comparison.

I thought that they might hold off on “Haven’t Had Enough” for encore, but it actually appeared fairly early in the set. It was at this point that I really started wondering if they had any aces up their sleeve.

After “Haven’t Had Enough”, Josh hopped on the keyboard for – I believe it was – “Beside You”. Faithful Trenchers and YouTube junkies may have known that he could play the keys already, but it came as a minor surprise to me.

Then, the band was joined onstage by “fifth band member” Steve Marshall, who co-wrote “Push”, a song I can’t remember ever hearing prior to the show. It turned out to be a really catchy tune, and I got right into it. Frankly, it would have been cool had Marshall joined them for a few more songs.

Even after that, the band kept the momentum high with “Cross My Heart”, and the latter half of their set.

Marianas Trench left the stage shortly after 10, but returned for two encores. The band wrapped things up with a solo acoustic version of “Good to You” and the full-band epic “Masterpiece Theatre, Pt. 3”. It was at this point that I had to admit how brilliant the concept album angle has worked out for them.

In a way, when you hear one of their album openers or closers, you get the sense that you’re listening to a medley of the best moments on the album. And really, you are.

It’s a compelling idea musically, but it’s great marketing too, in an age in which “albums” are largely ignored. Trench fans know the band’s “B-sides”, because of how every song links to the other.

The other thing that strikes me about Marianas Trench is how amazing they are vocally. They say it’s rare to see a rock band that can sing (there are plenty of great lead singers, but few bands in which all members can sing), and I have no trouble drawing comparisons to Def Leppard, though I’m sure some would argue that point.

Of course, stylistically, the Trench is a little more pop-punk, but give it some time. If they continue to experiment and grow beyond their mostly pop-oriented repertoire (not that there’s anything wrong with that), we just might have a modern day Pink-Floyd-meets-Def-Leppard in the making.

Furthermore, Trench still manages to sneak in everything from Barbershop quartet and Soul to Bluegrass without anyone feeling alienated. To say that they are just another pop-punk band is to miss the point entirely. This is a very dynamic musical unit.