Lessons in Creativity, Part 5: Working with Others 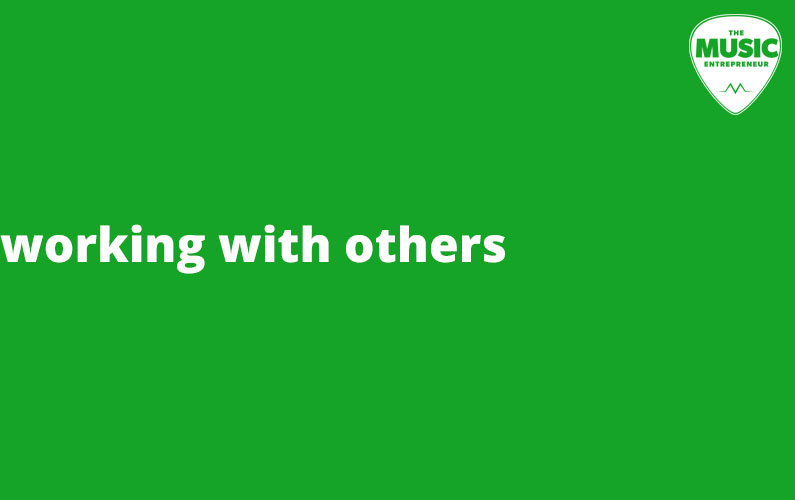 The goal of employment is to work for money and other people.

The object of entrepreneurship is to have money and people work for you.

I currently work with a few contractors, and I’ve also learned to leverage the talents of freelancers for one-off gigs – graphics, photos, blog posts, and so on. But I wouldn’t say that I’ve arrived or that I’ve built my personal dream team – I’m still learning daily.

Moreover, “leverage” probably sounds like a bit of a dirty word when applied to people, so let me put it this way: you need help.

You’re doing too much. If the “real work” is painting the picture, drawing the storyboard, writing the script, or composing a song, then odds are you aren’t spending enough time doing the real work.

We get caught up in everything else: administration, customer support, bookkeeping, scheduling blog posts, writing emails, interacting on social media, and so on.

When you’re first getting started, this is unavoidable. You’re going to be wearing many different hats, because that’s what your passion requires of you. And it’s not a bad thing to go through that.

But there is no scaling if you’re the go-to person for everything. You won’t be able to grow, because there’s only so much time in a day, and there are only so many hours you can work before you start hating your life – trust me, I’ve been there. Recently.

I’m not suggesting that creative work is all about balance – I am actually somewhat opposed to that idea. I don’t think Michael Jordan and Tiger Woods got to be the athletes they were because they tried to achieve perfect balance in their lives.

At the same time, it doesn’t make sense to burn out just because you can. And that’s why you shouldn’t be doing it alone. You need the support of others.

My best friend called me up one day and told me he was starting a business. I was sold – he didn’t have to sell me on it.

We got together for a few meetings to hash out the details of what would become Academe Design, an “integrated” graphic design company. The idea was that we wouldn’t just design things – we’d actually deliver the files to our suppliers, pick up the printed goods, and get them to our clients.

There was one major problem – I wasn’t a people person, and neither was my partner. We both had a lot of fears around talking to people.

In ensuing years, we picked up clients at the alarming rate of about three or four per year. Our business was profitable by a very small margin, but never lucrative. That went on for nearly 10 years.

But I will say this – I learned a lot about people as result of that experience.

I still recall one instance in which a friend of ours asked us to design his album artwork. My partner and I put together a solid design based on the provided photography, some of which wasn’t high resolution and wouldn’t look that great once printed. We made sure he was aware of this, but he didn’t seem to mind.

Apparently, he was working on some pretty tight deadlines, and he didn’t tell us that he’d already promised CDs to radio stations, promoters, fans, and so on.

I was the point person on this project (which wasn’t a role I was comfortable with), so I was the one handling the back-and-forth with the supplier and the client. I created the quote and laid out the timeline for the project.

I made mistakes on both fronts. With regards to the quote, I threw out a rough number, forgetting to tell him that it was just an estimate and not a final quote. In the end, I ended up eating the costs on that project (i.e. we didn’t make any money).

As for the timeline, I was pretty confident I had delivered the right information. But one day I got an angry call from the client saying he was going to have his CD release party by such-and-such a date, and that he needed the discs yesterday.

I needed to say something – and fast. The CDs weren’t in yet, even though the replication and printing should have been done. In the end, I told him that the processing period was in business days, not calendar days. That seemed to calm him down.

I actually made one other mistake with this project, though it’s not worth mentioning, because no one noticed. Let’s leave it a sin of omission.

As far as learning experiences go, this was a bit of a rough one. One moment I was growing up in Japan, grieving the loss of my dad, returning to Canada… The next, I was being reamed out by a client who was also a friend.

Most of us dream too small, which might explain why we tend to compete with our peers for the same low-hanging fruit. No wonder so many of us never actually get the fruit!

It’s the perfectionism that us creatives need to set aside. I believe it’s one of the main reasons we tend not to trust others with our work. We don’t think they’ll do it up to our personal standards.

Well, if you’re doing the real work, then you’re right. But if you’re trying to nudge the logo on your website over three pixels, what the hell are you doing?

I find myself wrestling with my own dreams. My dream muscle has been stretched. I’ve seen what’s possible, because I’ve been around people that have achieved a lot. That’s why, despite how irrational it may seem, I keep coming back to the bigger vision of what I desire out of life.

And the only reason that dream can remain big is because I also have others people mind. There are things I want to do for those around me, and there are complete strangers I want to bless. If not for that, maybe my dreams would be smaller than they are.

I don’t think big dreams can be realized without working with others. You can no doubt be brilliant in your own work, but it’s through community we discover ourselves and the hidden potential that lies within.