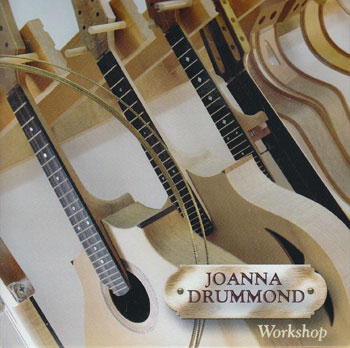 Happy New Year! For the first post of 2015, I decided to review Joanna Drummond’s Workshop. I hope you enjoy!

Joanna Drummond is a Folk singer/songwriter from Calgary, and for the sake of transparency I should let you know that she is also friend of mine. This won’t be the first time I’ve reviewed a friend’s album, though to be fair I have written about artists that I have never had any contact with too.

Joanna used to be an opera singer, but she fell in love with the expressiveness of Folk music and began to write her own songs and learn the guitar.

On Workshop, we finally get a little bit of an inside view into what she has been building towards for several years.

Here are my thoughts on this album.

The production of this album is nothing short of impressive. I was instantly struck by the quality of the recordings, the mix, as well as the individual performances.

For example, the opening track, “Wishing Well”, begins with a lone acoustic guitar, but is soon met by Joanna’s smooth vocals. Then, a playful bass begins to add to the texture of the song, and is joined by backing vocals, gentle percussion, a distant organ and a lead guitar melody to add to the richness of the chorus.

And then, the album remains just as dynamically expressive throughout. In this day and age of loudness wars and over-compression, this album sticks out like a sore thumb. It’s as if it’s reminding us of a time when dynamics were still a relevant part of music. Oh, that’s right, good music almost always had good dynamics!

In the mix, everything is audible, and everything is sitting in its proper place. Nothing is overwhelmingly loud, too quiet or harsh sounding. Overall the production does have a bit of a modern coat of polish on it, but still exhibits the warmness of past albums too.

For the most part, I’m a Rock, Funk, Electronic and Soundtrack kind of guy. I will give just about anything a try, and don’t mind experiencing other flavors of music, but the old standbys are more or less set in stone.

Even when I started playing acoustic guitar back in 2006, I simply transferred over the skills I acquired from electric guitar and applied them directly to the acoustic. Of course, in time, I did come to appreciate the differences, and even developed a more congruent style of acoustic playing.

The reason I’m taking you on this diversion is because my appreciation for the Folk genre has grown over time, thanks to the people I’ve met; some of whom I’ve had the chance to perform with (like Jonathan Ferguson, or the subject of this review, Joanna Drummond, for that matter).

To this day, I can’t say that Folk music is a regular part of my music diet. However, as I get to know more musicians, purchase CDs, exchange CDs or even receive CDs as gifts, my collection has grown and I do make it a point to listen to every single one.

I guess this is a roundabout way of saying that I really enjoy what I hear on Workshop. The instruments blend nicely, the songs flow effortlessly, and the lyrics are finely tuned. At times, I am reminded of John Denver or the Barenaked Ladies, and at other times I am drawing comparisons to some of the influences Joanna has listed on her website, including Joni Mitchell, Paul Simon, Ani DiFranco and Amelia Curran.

I may not listen to Folk all time, but I don’t mind adding albums like this one into the circulation.

Workshop carries themes of becoming, of longing, of isolation, of wondering, of the human condition, of motherhood, and more. The lyrics are both personal and sentimental. As Joanna’s website says:

Workshop is about the process of becoming, the idea that we are all unfinished projects.

It’s clear to see that considerable thought was put into every word, the meaning it would carry, and how it would flow within the context each song.

I wish there was more to say, but there simply isn’t. The lyrics speak for themselves, and they were evidently crafted with a lot of care.

For me, the album artwork leaves something to be desired. Not because it’s bad – it’s actually quite good – but because it relies too heavily upon abstract photography (of acoustic guitars in the process of being built).

Certainly, folk music is synonymous with acoustic guitars, and thematically, the photos do fit the esthetic and overall theme of Workshop.

However, I know all too well the dangers of relying too heavily on photography that doesn’t make a statement. As a listener, upon deeper investigation, you can probably begin to form your own feelings and conclusions about it, but if it doesn’t instantly leap out at you, you may not choose to go any deeper. It’s a little sad, but that’s the world we live in now.

How do I know this? Because I did the very same thing for the artwork with my first album. Don’t get me wrong; Adam Burwash and I did receive high praise for the design, but there were also people that felt that a photo of me should have been included. Oops.

These sentiments seem to ring true for Workshop, whose color scheme is monochromatic, and whose design does not don the artist responsible for the music inside.

This probably sounds nitpicky, but it’s not meant that way. What I want to see is a package that truly reflects the blood, sweat and tears of the artists represented inside.

I know, I’ve probably said too much about me in this review, though that wasn’t really my intention. For me, it’s hard to separate Joanna Drummond from my personal experience in Calgary, as well as the collective experience I’ve long observed in the local music scene.

If I were to summarize my thoughts, Joanna Drummond’s Workshop is a polished gem. If you like the simplicity of Folk music, gentle melodies and the easy blend of acoustic instruments, there’s no reason why you shouldn’t like this (affiliate link).

Joanna no doubt has a bright future in Folk music, whatever that may entail.