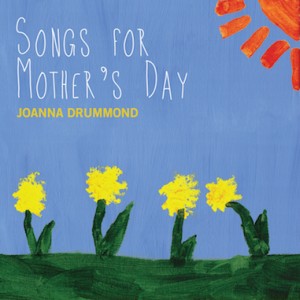 I just published a review of Joanna Drummond’s Workshop back in January, and she’s already following it up with Songs for Mother’s Day – released on April 18, 2015 – showing no signs of the all-too-common sophomore slump.

And perhaps that’s more of a reason rather than a deterrent to get that second release out quickly. You can move onto the third one without having to think too deeply about your past release that either reflected poorly on you or was difficult for you to unleash upon the world; for whatever reason.

Still, the sophomore slump seems mostly irrelevant to this topic of Joanna’s new release. Sure, it is a natural extension of what we were treated to on Workshop, but it seems to me that Joanna took some fairly calculated risks to ensure that it wouldn’t come across exactly the same as last time.

I will get to that in a moment, but first, let’s take a look at the overall production of this release.

I think if I were to touch on the production of this release at all, it would essentially boil down to the same thing as last time; the mix and the quality of the recordings are polished, and the individual performances are solid.

For me, this album does feel a little more homey and a little less produced compared to Workshop. Perhaps it’s just the instrumentation playing tricks on me, but I feel like there’s a little more rawness and space to the album.

Of course, it’s no surprise that the production remains close to her first album, because much of the personnel involved in this recording are returning for a second round.

The instrumentation on this album is a little more varied compared to last time, but is nevertheless dynamic.

Where Workshop was primarily a Folk-singer/songwriter album, there are some new flavors to be experienced on Songs for Mother’s Day, including some banjo, which brings more of a country flare to a few tracks on the album, like “Spring Run-Off” and “How Will We Learn”.

I also noticed that Joanna left more room for the instruments to breathe. There are multiple instrumental solos on this album that really open up the tracks and add some nice variety.

Like last time, I still can’t help but draw some comparisons to John Denver, Barenaked Ladies, and some of her other influences like Joni Mitchell, Paul Simon and Amelia Curran.

In particular, I can’t help but be reminded of Steve Page on “Dandelion Bouquet”.

Another aspect that brings some freshness to this project is the variety of guest singers that were featured on this album, including Amy Bishop, Ruth Purves Smith, Christie Simmons, Natasha Platt, and Clea Roddick.

It may seem over-ambitious to feature that many singers at first, but there’s nothing about it that spells a lack of preparation or last-minute inspiration.

I will say that – on Songs for Mothers’ Day – there are some similar moments to the previous album. This is sometimes inevitable when releases are so close together, and can also be subject to the well you are drawing from.

Case in point, the chord progression to “In the Bud” is fairly similar to that of “Wishing Well” on Workshop, though they certainly aren’t exactly the same songs.

However, a little bit of a trademark or signature is not a bad thing to leave on your work.

This album is also somewhat conceptual in nature, and that’s something I often enjoy. The fact that it’s thematic should be fairly self-evident, but there are also some interesting auditory bridges between songs, like the sound of children playing in the playground, which connects the end of “Dandelion Bouquet” to the beginning of “How Will We Learn”.

I just got finished saying this, but the overall theme of this album is fairly evident from the title; Songs for Mother’s Day.

As Joanna’s website (and liner notes on the album) articulately states:

The songs on this album are inspired by the intimacies and struggles that women sometimes share with each other, and sometimes face alone. They are drawn from the playground chat, the daily pressures, the quiet desires and the purest of joys. And even though each woman’s story is different, there are ways that motherhood can bring women together.

I think it’s only fair that I begin this section from the perspective of Joanna’s, because I am a man, so to an extent, I am disqualified from even touching on the lyrics. I can’t really speak to being a woman or a mother.

But I will say this: like last time, I see a lot of careful attention and detail in every lyric. They are deeply sentimental and reflective in a way that the average day-to-day conversation simply doesn’t allow.

The lyrics are both deep and poignant, pointing to the richness of life and experience.

The design of this album is colorful, playful, and well-suited to the subject matter.

The only real “criticism” I had for Joanna’s previous album was the artwork, which was good, but still left something to be desired.

This time, I think the artwork and design (primarily provided by Joanna’s daughter Sylviane), is one of its main selling points.

I appreciate the thematic nature of this album, though I don’t think I can say that I’ve taken a holistic look at it without touching on the novel aspect of it, at least briefly.

I’m sure my mom would say that every day is mother’s day, and that sentiment is not lost on me, but of course as a culture we basically see it as a one-off event that comes around once per year.

I guess it might be “dirty” to talk about this aspect of the music in a review, but part of the selling strength of an album like this relies on the event itself, even if the music is richer and deeper than that.

In my opinion, it’s still good marketing. Just look at “Weird Al” Yankovic, who – through an illustrious career – has essentially transcended the concept of novel itself.

In today’s music industry, it is so often said that artists need to find a way to cut through the noise and stand out from the crowd, but we tend to forget how valuable finding a niche could be to that process.

I like Joanna’s second album. It’s not as much of a surprise as her first, but it’s equally as good if not better. I think it will prove to be a significant step in the next stages of her career.