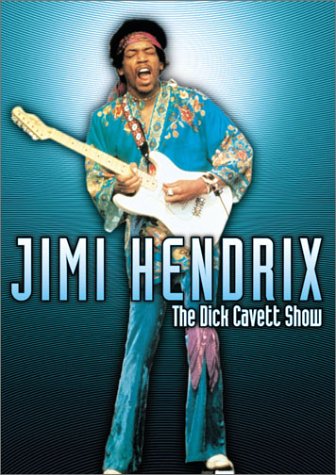 The Jimi Hendrix – The Dick Cavett Show DVD features Jimi’s two appearances on the Dick Cavett show, plus a documentary featuring commentary from the likes of Mitch Mitchell, Billy Cox and Dick Cavett himself.

The performances probably aren’t as significant as the appearances, as it brought Jimi Hendrix to a whole new audience who didn’t fit the general concert attendee demographic. It put a face to a name for those who had heard of Hendrix but had never actually seen him before. However, his performances on the show were short and fairly reserved. You won’t really see any of the iconic antics Jimi was known for on this DVD.

His appearance on July 7 is perhaps the more interesting one, because it shows Jimi performing with the house band. The sound isn’t as great as it could be, but his Strat still sounds good, and at least it’s relatively clear. The house band also does a lot better than you might think.

Jimi’s performance on September 9 is conspicuously the lesser of the two; it’s readily apparent that the band had to cut “Machine Gun” – which usually extended into prolonged jam sessions onstage – short. It may have been better if the band had performed a longer version of “Izabella”, instead of trying to squeeze in two songs. This may have been an executive decision. The sound is rather muffled, and based on comments from the band members, there were clearly certain constraints to this performance. Mitch Mitchell recalls they didn’t really have a sound check to speak of.

Dick Cavett’s interview questions are enlightening as far as Jimi’s personality is concerned, but they don’t really go anywhere. There aren’t any specific facts or points of interest to latch on to, and Jimi wasn’t giving Cavett a whole lot to work with. Jimi doesn’t seem entirely comfortable in this role – which might be why he didn’t volunteer a whole lot of information – but still appears to be enjoying himself overall.

The Jimi Hendrix – The Dick Cavett Show DVD certainly isn’t a must-buy, even for fans, but hardcore fans might be inclined to check it out. The rest of us could probably catch these performances on YouTube or some other site, and that would more than suffice for general audiences.