Is Google+ On Its Way Out? 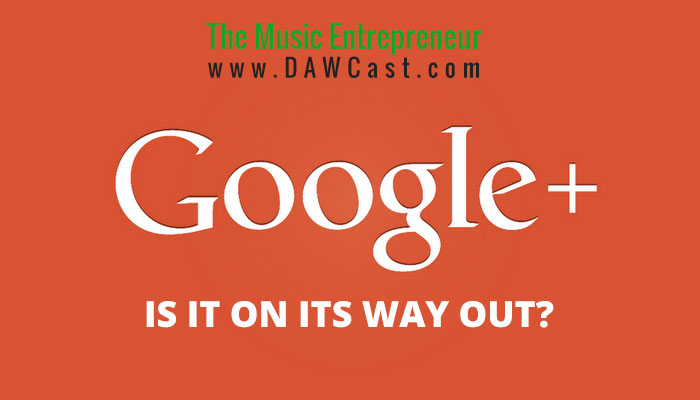 I’ve talked about how I’m a Google+ fan before. I’ve mentioned it on the podcast and in my eBook too. It hasn’t caught on the way other social networks like Facebook have, but its user base is still pretty significant, and I know a lot of people that like it (including several musicians).

Google+ was Vic Gundotra’s pet project. In April 2014, Gundotra left Google, and though the company didn’t say that the project would go on their backburner, that’s more or less how things have panned out.

It looks like they’re at least somewhat interested in keeping it as a social network, but they’ve already talked about how they’re going to be removing its integration with other Google products, such as Gmail and YouTube. This doesn’t mean that they’re phasing it out completely, just that you won’t require a Google+ profile to access the various Google products that are available.

In short, a Google+ membership will no longer be a prerequisite for accessing Google’s suite of products. It doesn’t appear that they’ve finalized things in this regard yet, but we can probably expect to see some changes in the coming months.

What to Do as a Musician on Google+

I wouldn’t necessarily suggest leaving Google+ out of your marketing plan altogether. There is actually a pretty good community for music on Google+, and if you’re regularly posting updates to your profile, you’ll probably continue to see some engagement. Weirdly enough, I haven’t seen a drop so much as an increase in followers and engagement on my posts lately.

What I will say is this: if Google isn’t going to make the social network a priority, neither should you. If you go to the trouble of building a large following on Google+, and they end up pulling the plug, you’re going to lose everything you’ve built, and you’re not going to get any of it back.

I’ve talked about the fact that changes can happen on social media many times before. You just never know when. Fortunately, we have a bit of an advance warning here, so there’s still an opportunity to react.

Most importantly, if you’re on Google+, I would suggest capturing as many of those followers as you possibly can. Ask them to sign up for your email list immediately. Secondarily, get them to follow you on Twitter or Facebook. Again, you don’t want to lose what you’ve put a lot of hard work into creating, so make sure to keep as many connections as humanly possible.