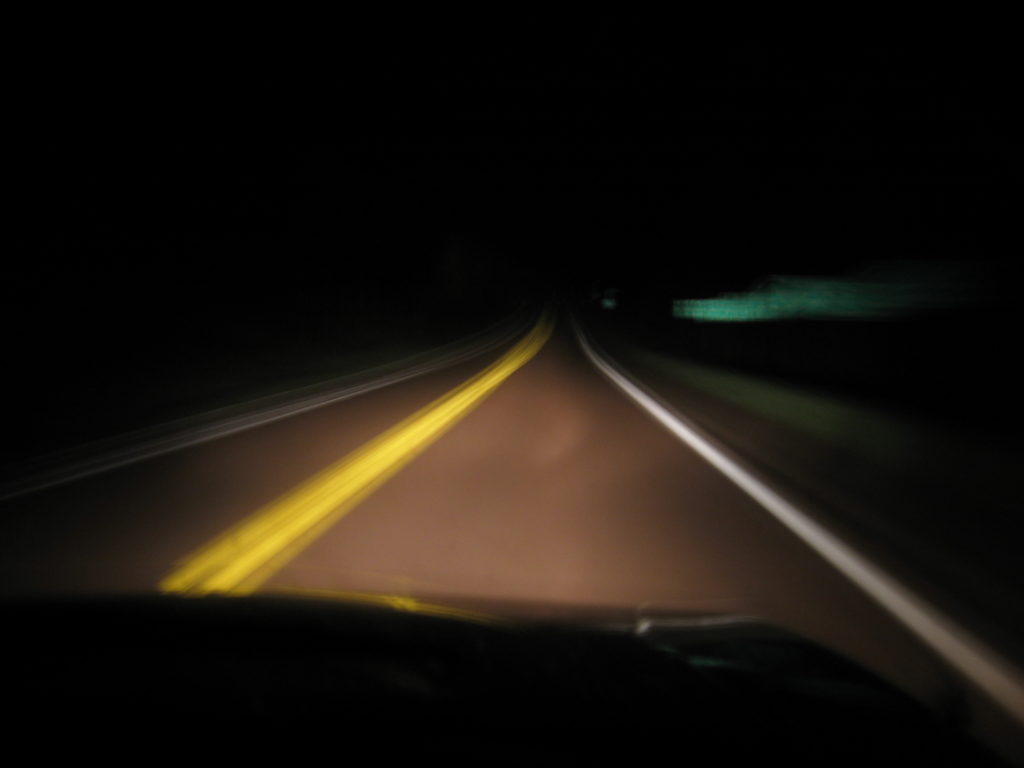 On the night of December 29, 2013, I drove out to Canmore. Because I live in Calgary, I have easy access to the mountains, and Canmore – a town nestled in the Rockies – is a mere 70-to-80-minute-drive from where I live. It is a bit of a “tourist town” (not as much as Banff), but it’s still a nice getaway, even for a few hours.

I went out there to read for a while, reflect on my goals, and plan for another week. I have found that getting away from the distractions at home (which is essentially my workplace) helps me to concentrate better. I had a very productive planning session.

I must have arrived in town shortly before five o’ clock, so I knew that by the time I left town, it would be dark. I had also gone out to Canmore a week previously, so I knew that I wanted to take the back route back into Calgary. Even though it’s a longer drive, I find it quiet and relaxing. Moreover, the main highway is often overflowing with weekend traffic, and I usually try to avoid that.

So, when I started heading back, the back route was quiet as anticipated. However, it was also very dark. I was able to use my bright lights for the most part, but of course they had to be turned off any time I passed a car on the opposite side. I went slow, took my time, and did my best to keep my eyes on the road.

Unfortunately, the inevitable happened. A car passed on the opposite side, and for a brief moment I was blinded. I soon recognized an animal coming quickly coming towards me, but there was no time to react. I collided with it. It could have been a cow or a deer or an elk. Based on its size, I think it was probably a cow or an elk.

I immediately went into shock, and I wasn’t sure what had just happened. My car kept on running, so when I started to calm down, I knew that I had emerged unharmed. I began to realize that I probably did little more than annoy that beastly animal, which probably would have totaled my little Nissan Altima if I had hit it head-on.

Apparently, I had hit just the animal’s head. As I would joke later, somewhere out there, there is a cow or an elk with a really sore neck. As you can imagine, the beast left a rather sizeable impression on my windshield and took the side mirror mount right off. All things considered, the situation could have been much worse.

It’s important to take some time to learn from your mistakes. I guess I could write this situation off as an accident or an external circumstance beyond my control, but I’ve decided to see it as an opportunity to learn.

I think the main takeaway here is to avoid procrastination. There are some situations where procrastination doesn’t wreak havoc on your life, but then there are other cases where the consequences can be much more severe. In general, procrastination is not a good habit to get into.

Here are a few things I could have done beforehand to prevent this occurrence:

For those who work long hours on different electronic devices, here’s a little tip that will help you save your eyes. Not only that, but it will actually help you to sleep better at night too. Just remember to install it on all of your electronic devices. Depending on the device, you may need to find a different app or similar app.

I’m sure many of you out there are already aware of it, but some of you may not be. The app is called f.lux. It’s a lightweight app that runs in the background, and it will automatically take out the blues or the “cool” colors on your screen as your local time approaches sundown.

Of course, this isn’t great for graphic design or color-sensitive work, but there is an option to disable it for an hour, so all is well.