Hélène Blazy Shares Her Journey As A Composer 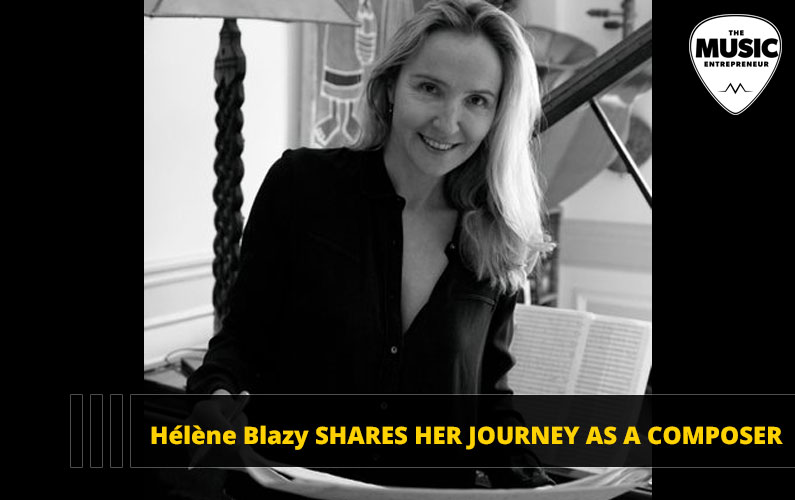 And, it’s time for another The Music Entrepreneur HQ exclusive.

We’ve covered the topic of composition in the past, but here we get to hear from Hélène Blazy who is an accomplished and prolific musician.

So, here she is to answer our questions.

Who are you and what do you do?

I am Hélène Blazy, music composer for movies, media and for concerts. I have 10 years’ experience at the National Orchestra of the Paris Opera as a violinist, as well as experience in the studio recording music for CDs and film music.

Who inspired you to pursue a career in music?

Music was a clear love to me from the age of five. I attended concerts from a very young age and I was inspired to play the violin by listening to artists like Christian Ferras.

I also listened to magnificent performers such as Leonard Bernstein, who came to direct his West Side Story with the National Orchestra of France – for me, he is one of the greatest performers of our time.

By this time, I was already composing my first melodies by writing on my school books, “to orchestrate later, when I know!”. I continued my studies of violin, Solfege and writing classes at CNSM Paris and Lyon where I won my first four prizes.

Who are your greatest musical influences?

All genres of music and the various musical expressions inspire me. I like to bring back instruments and recordings of popular and traditional music, although I am especially influenced by the great repertoire and symphonic writing.

What led you to follow the path of production rather than another?

I have always appreciated the great music of movies including Ennio Morricone, Nini Rota, Michel Legrand and Leonard Bernstein.  I wanted to do the same after I finished my studies at CNSM Paris. I signed about 100 original works on films and documentaries, including Un Coupable Idéal, a documentary directed by Jean-Xavier De Lestrade who received an Oscar in 2002.

I devoted a large part of my compositions to CDs intended for the picture, which gave me the opportunity to record more than 120 varied titles, published by Universal Production Publishing Music (UPPM) which are regularly synchronized to movies and media.

What have been the biggest challenges of working in musical production?

Convincing productions to finance acoustic recordings of my scores with studio musicians, from smaller ensembles to symphony orchestras. It is a challenge, but it is definitely one of the most interesting parts of musical production. The mix of instruments made with synths and machines in a home studio can be hard, but with time and effort, it can work great.

What are the special pleasures of working in production music?

It is a reward for the composer to know that other people are listening to their music, who is probably isolated at the time of writing and orchestrating their music. Click To Tweet

What are you most proud of?

All of it from performances, albums and songs. Each one is a new challenge, although I give 100% each time whatever the destination of my music; Film, Universal, concerts.

I particularly like my CD edited by UPPM, Movie Lovers Symphony where I composed 16 symphonic titles recorded in 1999 in Bulgaria – five days of sessions with 85 musicians. The CD has had some success, with the Cannes Film Festival using it for its 55th opening and closing ceremony.

Where do you see yourself in 10 years?

Concentrating on the essential and dedicating myself to concert music, CDs and film with greater risk taking and the idea of total creative freedom that will hopefully pay off.

I hope that one day I will be entrusted with a beautiful and great historical fictional film, a film that deserves the writing of a great score. With Universal, I am up for new projects and recordings and I am proud of my work with them.

What advice would you give to someone in music production?

Do each project with enthusiasm and with your full potential, and the outcome will be amazing. Click To Tweet

You can listen to some of Hélène Blazy’s work here: https://www.universalproductionmusic.com/en-gb/discover/composers/807/Helene-Blazy

Thank you, Hélène for sharing!

If you enjoyed this, be sure to thank her on Twitter: @heleneblazy

And, if you have any thoughts or questions, be sure to leave them in the comments below.