Digital Record Albums: a Better Way to Connect with Your Fans 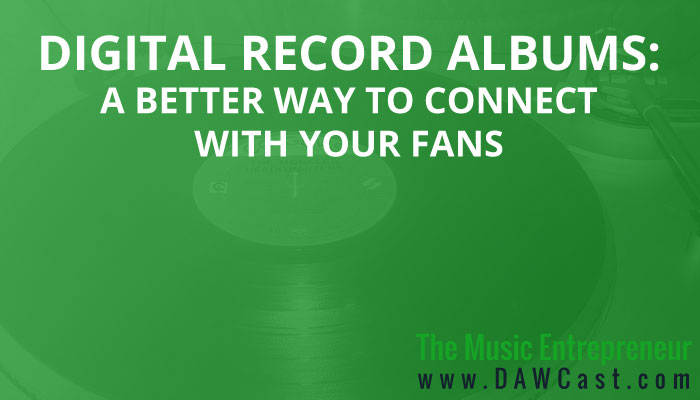 Hey everyone! This week’s post was written by my friend, Tom Jeffries of Safe-Xchange.

In this article, he discusses the potential of digital record albums.

As you may know, vinyl records were the primary medium for music consumption until CDs and MP3s came along. Vinyl record sleeves were considerably larger than CD jewel cases, which meant that album artwork could be elaborate and more detailed. It also meant that artists and record companies could include a lot of extras for their fans to enjoy (including extensive liner notes).

It’s exciting to consider the possibilities of what a digital record album could offer. Artists could start building more meaningful relationships with their fans through their recorded music again. Read on to learn more.

Also, make sure to say “Thanks” to Tom in the comments section below! – David

Fifty years ago vinyl record albums were, by far, the best way for a band or an artist to connect with their fans. The sound on vinyl was better than radio (and better than MP3s and even CDs today), plus the record album had room for pictures, text, and even liner notes that could be inside the record jacket.

Then we entered the digital age, giving bands and artists fewer ways to connect with their fans.

First we had CDs, which don’t sound quite as good as vinyl but, even more important, there’s no room for all the pictures and text that a vinyl album has. Then MP3s came along. Yes, they offer great compression levels, but they do not offer great sound. You can add a certain amount of textual information to an mp3 (name of song and artist), but there is no way to use an MP3 file to establish the connection.

Spotify, Pandora, and the rest of the online broadcasters are the new radio. If you listen on Spotify, you might hear one song from an artist you like, but in general you don’t get to hear more than one. iTunes has what one might consider to be record albums, but providing you with 10 songs and a tiny bit of information doesn’t help the musician connect with their fans, and fans love to connect with the musicians they like!

Not only is that better than what’s going on digitally, it’s better than vinyl record albums!

The digital age has just begun. The transition to digital has been difficult for many reasons, but there is enormous potential.

Musicians have felt for a number of years like they have been between a rock and a hard place. The time has come to use digital technology to help the musician, and digital record albums can be a great way to do it.

Tom Jeffries is an experienced trumpet player and software engineer. In 2000, he started working to bring file sharers and musicians together. He is the Founder and CEO of Safe-Xchange, LLC, which works towards turning the 300 million file sharers into revenue streams for musicians and filmmakers.