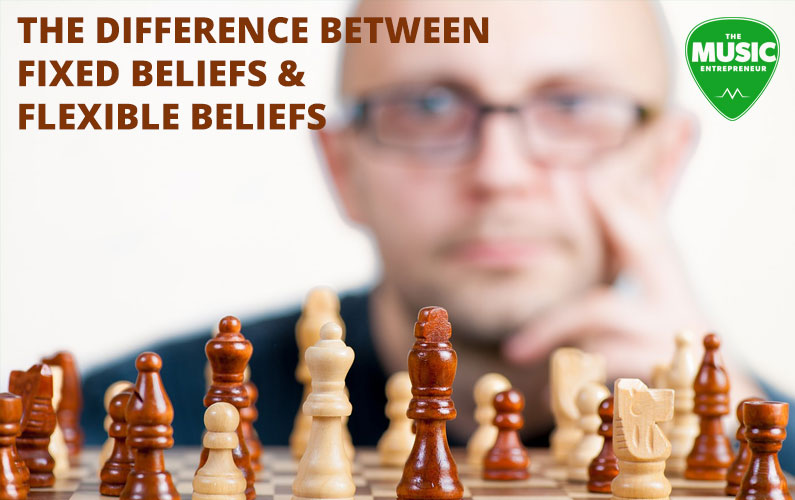 What you believe affects what you do. This is not a terribly profound thought, but I’m sure you would agree that it’s an important one.

As I continue down this path of music industry consultant/advisor/helper, I’ve come to recognize an even deeper truth – that there’s a significant difference between fixed beliefs and flexible beliefs.

Both types of beliefs are valuable, but when applied incorrectly, they can hinder your growth and limit your progress and potential.

Let me share with you what I’ve been learning about belief systems and how this concept can change your reality.

What is a Fixed Belief?

A fixed belief is whatever you consider to be absolute truth.

This does not need to be an objective truth, because many of us believe things that can’t be quantified or verified. It’s whatever you believe to be true.

Here’s an example of a fixed belief that would serve you well:

I believe in the Law of Gravity.

Since walking off of a tall building or a cliff would send you plummeting to injury or death, this is a good belief to have. Violate the law at your own peril.

Here’s an example of a fixed belief that could cause you to miss out on opportunities:

I believe in prioritizing music conferences over anything else in my music career.

On the surface, it seems like a good belief. In my book, The New Music Industry, I even talk about the importance of going to conferences and events and what they can do for your career.

But if you believe that there’s nothing more important than music conferences, you will prioritize them over everything else, including: career-building gigs, the signing of a major label contract, licensing or placement opportunities, and so on.

A belief like that could end up negatively impacting your career. Because it’s a fixed belief, it’s much harder for you and others to challenge and debunk.

Now you know both the pros and cons of fixed beliefs.

What is a Flexible Belief?

A flexible belief is something you regard as being true, but not absolute truth. You’re open to new stimuli and feedback that could add a new layer to the belief.

Here’s an example of a flexible belief that would serve you well:

I believe in the importance of networking and meeting new people.

Meeting new people can open doors to fresh opportunities. People work with those they know, like and trust, so as you build more relationships, you may see your career prosper like never before.

One of the reasons this belief works is because there are no priority statements attached to it. You’re not saying it’s more important than anything else (but you might want to – for example, it’s probably more important than talking to your friends on Facebook).

Admittedly, this belief can also be a dangerous one, because if you have a good experience, the belief will become stronger. If you have a negative experienc, it could weaken. You must be careful with where new information takes you.

Here’s an example of a flexible belief that’s more likely to have negative consequences attached to it:

I don’t believe seatbelts are all that important.

Since it’s a flexible belief, you’re at least open to new information that might tell you otherwise. The problem is that, by the time the feedback has shown up, it might be too late – it could be after you’ve flown through a windshield.

Now you know the pros and cons of flexible beliefs.

Why is This Difference Important?

We are all living out our beliefs. And as I said at the outset, what you believe influences your actions.

Both fixed beliefs and flexible beliefs have the potential to bring about a great deal of joy or pain. As such, they need to be applied carefully.

I’ve experienced a great deal of pain because of fixed beliefs that did not serve me. When it became apparent that I could no longer hold onto these lies, I was forced to reexamine my convictions, and had to come to new conclusions about what was true.

Many of these assumptions come from our upbringing: parents, teachers, coaches, pastors, the media and so on.

That’s the main danger of fixed beliefs – you keep holding onto philosophy that doesn’t serve you, even though it’s long past the point of hurting you and eroding your confidence.

It might still hurt when you’re wrong, but not as much. You stay open to new feedback, because that feedback allows you to learn and grow.

So while there are some dangers to be avoided with flexible beliefs, it usually comes from being too casual or unintentional about it.

Why You Shouldn’t Settle

Flexible beliefs allow for continual growth. It’s not about replacing an old belief with a new one at every turn, but rather about having the willingness to challenge assumptions. And, as you begin that process, you start to see that there are a lot of things from your past that aren’t adding any value.

Too many fixed beliefs do not serve you as an artist. Now, it might sound tiring to continually ask questions and challenge yourself, but it will help you remain open to new possibilities. It can also work as a feedback mechanism for when an alternate course of action (one that’s different from the one you would normally choose) could be a better one for your life or career.

I can’t tell you what’s right for you without knowing the specifics of the situation, and even then, it’s based strictly on what I know about you. But understanding the difference between these two belief systems could help you eliminate obstacles from your path and cause you to have breakthroughs never before imagined.