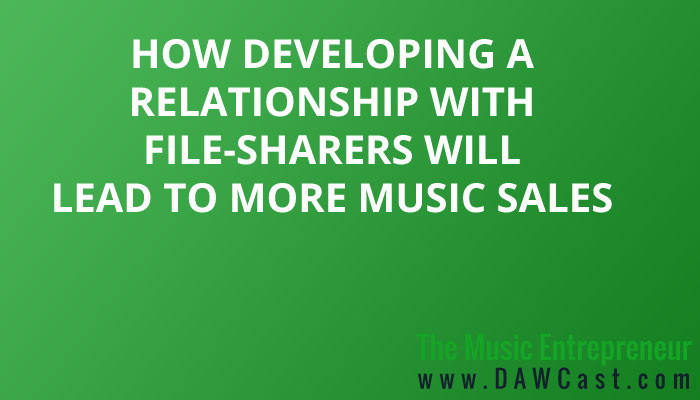 In addition to last week’s post, this one was also contributed by my friend, Tom Jeffries of Safe-Xchange.

In this article, Tom addresses one of the most heated controversies in the music industry: file-sharing.

Early on, it was believed that peer-to-peer networks and file-sharing were detrimental to the future of artists and (mostly) the music industry. Tom provides evidence to the contrary, and cites several real-life examples of experiments involving file-sharing that turned out to be beneficial to artists.

We’d love to hear your thoughts on this topic. Make sure to leave feedback in the comments section below, and don’t forget to thank Tom for his contribution! – David

Technological advances always bring change. 500 years ago, people were put to death for using the printing press. That didn’t stop the printing press, it was simply the reaction of the people who wanted to keep their control of society.

The move to digital, and especially the internet, has brought huge changes, and those changes are likely to continue for many years. The music industry is fighting those changes. In the long run, they will not win. Unfortunately, they are making life very difficult for musicians.

300 million people share files on the peer-to-peer (P2P) networks every month. Those people spend between 30 to 35% more on music and film than the general population. The music industry is trying to stop them, but the truth is that they are great fans and great customers. Many experiments have been done to prove this point.

In 2006 Coca-Cola and Jay-Z put a video clip of Jay-Z’s live concert in Radio City Music Hall on the file sharing networks. The Wall Street Journal published an article on October 18, 2006 entitled Record Labels Turn Piracy Into a Marketing Opportunity that described how successful this was. Here’s a quote from the article:

But now there’s a growing recognition among some record executives and performers that the people who are downloading illegally are frequently huge music fans and that marketing to them may be more desirable in the long run than suing or otherwise harassing them.

Several years ago, Eric Clapton’s managers put a Flash widget out on the P2P networks. It included two great music videos, one with Eric Clapton and one of Carlos Santana, a YouTube video of ZZ Top, along with other things that helped the downloader connect with Eric Clapton. The goal was to sell an Eric Clapton music video DVD. It worked so well they did it three times.

I don’t know how I didn’t think of this earlier – it’s the most obvious thing in the world since BitTorrent has such a huge global reach. It’s not just about getting music to the people who would buy it anyway – even though that is, of course, very good – the hardest thing to do is make new fans.

Iron Maiden used data about file sharing from Musicmetric to determine that they had a huge base of fans in South America, in particular Brazil, Venezuela, Mexico, Colombia, and Chile. They booked a tour, and raked in $2,580,000 from a single show in Sao Paolo.

My first foretaste of this came 15 years ago. We had a no-Napster rule in our house. I happened to notice my son was running Napster and asked him why. He said he bought more music than he had before; rather than going into record stores and seeing the pretty packages, he could listen to the music and know which bands he liked.

The digital world and the internet are revolutionizing the music industry. The music industry calls file-sharers “worse than pirates”, ignoring the fact that real pirates kill people. The truth is that file-sharers are great fans, and we need to find ways to connect with – and get revenue from – file-sharers. That’s not going to be a simple task, but looking at file-sharers in a positive light is a step in the right direction.

Tom Jeffries is an experienced trumpet player and software engineer. In 2000, he started working to bring file sharers and musicians together. He is the Founder and CEO of Safe-Xchange, LLC, which works towards turning the 300 million file sharers into revenue streams for musicians and filmmakers.