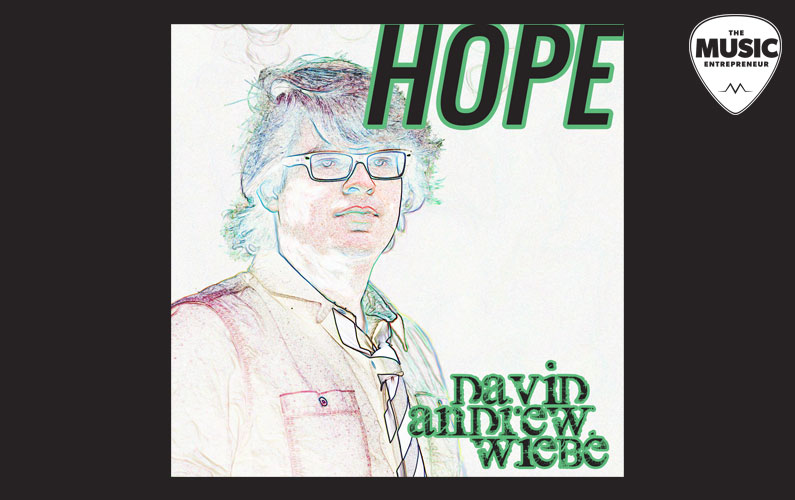 We’re a bit late in covering this piece of news, as David Andrew Wiebe’s “Hope” was officially released on September 27, 2016. But as they say, better late than never.

Wiebe is currently working on a new song called “Feeling”, a track he hopes to have completed before the end of the year. He’s had the opportunity to perform it in front of an audience a couple of times now, and feels confident that it’s something his fans will enjoy.

Meanwhile, “Hope” is the closest thing to EDM or “Pop” Wiebe has ever released.

“This was a deliberate choice,” said Wiebe. “But if you listen carefully, I think you can hear that there’s a real song there. I didn’t want to rely on any kind of beat. The song should hold up all on its own, whether it’s played on a grand piano or in a rock band. And I think it does.”

Wiebe reassures us – and reminds us – that it isn’t about the style of music as it is about the underlying song and its message. If there is a song of substance there, it can be enjoyed many different ways.

We caught up with Wiebe to ask him a few questions about his new single, so let’s delve in.

Why did you pick “Hope” as your latest single?

First, “Hope” is a new song. I could have dug something up from the archives and hit the record button on that, but I felt it important to continue my growth and evolution as an artist.

Second, I had a looming deadline with nothing recorded. You never want to throw something together at the last minute, but I had this half-finished song, and I felt that if I really dug in that I’d be able to complete it to my satisfaction. And I did.

With my current recording process, nothing is ever “perfect”, but I think having that deadline forces you to make the most of what you’ve got.

What is “Hope” about?

There’s a quote by Jiddu Krishnamurti that sums it up more eloquently than I ever could:

There is hope in [people], not in society, not in systems, [not in organized religious systems], but in you and me.

It may sound as though I wrote the lyrics after I’d found this quote, but it was actually the other way around. I was floored when I found it, and thought it was perfect.

There’s that line that goes:

The miracle is you and me

And I really feel that’s true. We spend so much time looking outward for who we are, like validation, and what we’re supposed to believe. But if we’re all here for this experience, and we chose it, it means that our hope in deity is misplaced. That’s mysticism.

I don’t see this being in contraction with the idea or the reality of an entity known as God, it’s just that we become too dependent on something we don’t even understand.

What makes “Hope” stand out?

For me, it’s a different kind of song. Not to say that I don’t write “Pop” songs, because I think I do, but arrangement and production wise, I haven’t done anything quite as “Pop” as “Hope”.

Subjectively, the song is built on a lot of hooks, and every section is a hook. And I think that also makes it a little different from prior efforts.

But the hook that stands out, at least for me, and probably for others, is the bridge, the section that begins with “Soon enough you figure out”. I’m glad that I decided to repeat this section, and even add an alternate bridge with additional lyrics at the end (i.e. the “Show me that it’s true” section).

The MOTU UltraLite-mk3 Hybrid is my audio interface, Tracktion 7 was my DAW of choice, and I used the RODE Procaster for the vocals. And I also used PowerTab for composition. That’s it, really.

Where can people find “Hope”?

For some reason the digital distribution was delayed, but you can find it pretty much everywhere now – CD Baby, iTunes, Spotify, and so on.

That’s it for now. You can’t get it physically, so go ahead and enjoy the single wherever you listen to music online. I look forward to hearing your thoughts on it.