David Andrew Wiebe Releases New Single, “Your Eyes Give It Away” 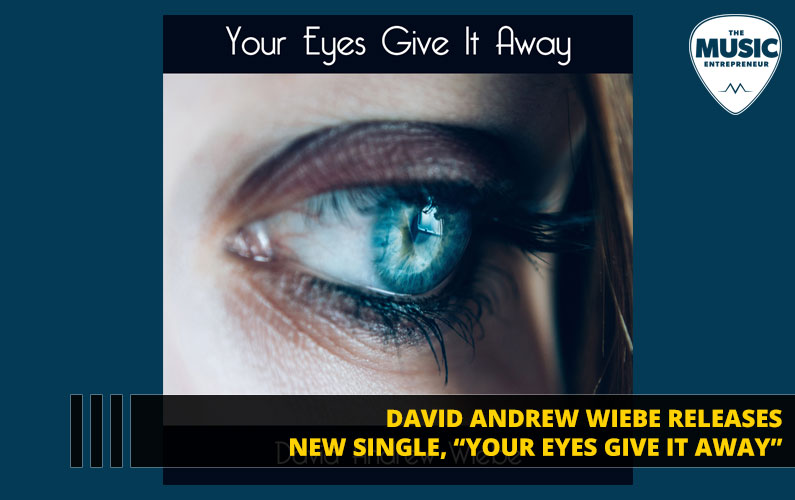 It’s been a while since we’ve heard from David Andrew Wiebe the artist.

His last release was at the end of March.

Evidently, Wiebe has been caught up in a whirlwind of work, and his personal life has also been shaken up.

Recording for “Your Eyes Give It Away” was already in motion in June. But it still took Wiebe the better part of July to finish it up and get it out into the world. He wasn’t even sure he could sit still long enough to get this single done.

We caught up with Wiebe and asked him to share what this new song is all about and how his journey inspired this work.

Why did you decide to record “Your Eyes Give It Away” specifically?

Though I’m not one to sit down and write dozens of songs these days, occasionally the events in my life will inspire me to go to work on a song that expresses the deepness of my emotions.

I don’t know if “Your Eyes Give It Away” is a special song, but it is uniquely me. It sounds like a song I would write. And, it was true to my feelings at the time.

I could have recorded it as a simple acoustic song, and that’s something I may still do. But I knew it could also work as a soft rock tune. A friend of mine said it sounded like “Hall & Oates & Wiebe”, which I think is a compliment.

I had been working on a few more demos leading up to the release of “Your Eyes…” but as is often the case with music I publish, this song came together relatively quickly. That motivates me and keeps me focused. When a song is too frustrating or time-consuming to record, I will usually scrap it or put it on the backburner.

Also, my last single, “Waves”, was an instrumental. I felt it important that people hear my voice again with my latest release.

What is “Your Eyes Give It Away” about?

There’s only so much I can say without revealing too much personal information, but I will share what I can.

The song is essentially about adult infatuation. Even as an adult, we can become intensely attracted to people unexpectedly. Those feelings can quickly take over our lives, and that can be scary.

Infatuation is uncertain, and I think “Your Eyes…” addresses this. When we like someone that much, we hope it turns out okay. But there are no guarantees, especially where two people are involved. You can’t control what the other person does.

“Your Eyes…” primarily expresses the joy and elation that can come from being drawn to someone, but also the fear of not knowing what’s going to happen next.

You’ve been shaken in your personal and professional life. What happened?

I’ve shared a little bit about this on the blog and the podcast.

While spending a couple of weeks in Okotoks in June, I found myself working until 10, 11, and even 12 at night. I only got up to make meals, go to the bathroom, go to meetings, or take the dog out for a walk. I barely had any time to wind down before going to bed. Then I would just start the cycle all over.

This had gone on for entirely too long, and I was beginning to question this lifestyle. Was I getting any further ahead? Was I taking time to enjoy myself? When I would be relieved from this crazy schedule?

Knowing me, I probably would not have done anything about it. I would have just kept on keeping on, left to my own devices. But that’s when a friend interrupted and asked me if I wanted to go kayaking. I thought to myself, “what a novel idea.”

And that was the beginning of a different kind of summer. I’ve been quite restless, and I’ve been walking and thinking a lot, but I’ve also developed a bit of a social life, and I think that has been positive.

How is “Your Eyes Give It Away” different from previous releases?

Well, I don’t think it would be different if my Back on Solid Ground material was out there. Unfortunately, that project didn’t exactly turn out, so people have only heard those songs in a live context.

Back on Solid Ground represents some of the gentlest material I’ve ever written. And, my writing process for that type of music – songs about love and heartbreak – tends to remain the same.

So, there was nothing like “Your Eyes…” on Shipwrecked… or on any other single I’ve put out to date. You could call it “soft rock” or even a “ballad”, but I think listeners will be treated to something a little different from my previous material if they give this song a try.

Here’s what I used to record “Your Eyes…”:

Where can people find “Your Eyes Give It Away”?

All the usual places – Spotify, Amazon, iTunes, and so forth. I hope you’ll take a listen, and if you enjoy it, please leave a comment below.

Filed Under: News Tagged With: ballad, David Andrew Wiebe, easy listening, pop, single, soft rock, your eyes give it away