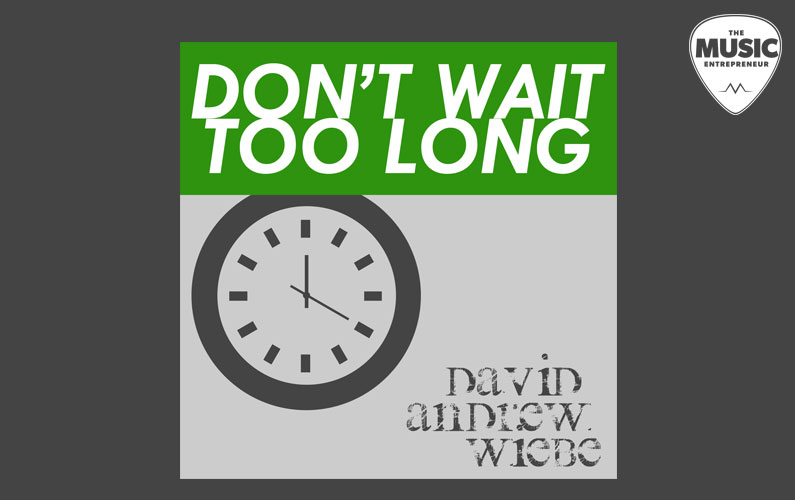 Due to a cold, his monthly release schedule was delayed somewhat with his latest single, “Don’t Wait Too Long”, but sure enough, the wait wasn’t too long (get it?), with the single only coming out a month late.

Wiebe has described the single as “power pop”, but it might also be accurate to call it Synthwave much like with “City Lights”, owing in part to its 80s influence.

Most notably, Wiebe is back to singing again. Both “Fragments” and “City Lights” were instrumentals, but on his latest single, fans finally have the opportunity to hear his voice on a recording once more – and it isn’t worse for wear.

The delay may have also had something to do with the layered vocal sound heard in “Don’t Wait Too Long”, in addition to the complexity involved in mixing and mastering a song with so many layered tracks.

We caught up with Wiebe to talk about his latest release, and here’s what he had to share with us.

Why did you decide to record “Don’t Wait Too Long” specifically?

I’d actually tossed around a bunch of different ideas. I thought about putting together another Synthwave/Retrowave track like “City Lights”. I thought about writing a quick acoustic song, or pulling one from the archives.

But production on “Don’t Wait Too Long” was already underway, so even though I knew it would be a little more intensive in terms of the work involved – layering of guitar and vocals – I decided to stick with it until it was done, which I think was the right decision. I sometimes waver in choosing what to record, but I’ve found the only way for me to get new music out is to commit to the project from start to finish.

As with “Fragments”, it’s something that had been sitting in my archives for a while, so I thought, “no time like the present to get it done.” I had the melody and the lyrics for the chorus, so it was just a matter of fleshing out the rest of the song.

What is “Don’t Wait Too Long” about?

Well, it’s open to interpretation, at least to a point. I think it’s fairly apparent that it’s a song about holding true to what you believe in.

For me, it was about a bit of a dark time back in 2011, when one of my roommates was going through a crisis, and he was questioning my belief system at every turn.

And to question your beliefs is definitely a healthy thing to do – it’s something I’ve been doing more of lately – but not when it’s imposed on you by others. Hurting people hurt people, and that’s part of the reality we have to confront as human beings. That’s the situation I was in.

Paradoxically, others telling you that they want to kill themselves is a form of abuse. You can’t necessarily talk them out of it, and when they insist on their view of reality, they project their beliefs onto you. You’re not in control of what they do.

How is “Don’t Wait Too Long” different from previous releases?

Maybe not in every conceivable way, but it’s quite a bit different from anything I’ve ever put out as a solo artist. One way of looking at it is that it’s a combination of “Fragments” and “City Lights”, except with vocals. The last two tracks I released didn’t have vocals on them, and the thing about instrumentals is that they’re really hard to get people to listen to them unless they’re really strong melodically. From that standpoint, “Don’t Wait Too Long” is maybe a little more accessible.

My friends all tell me that it has a strong 80s sound to it, and Jonathan Ferguson even said that it was the most 80s thing I’ve ever recorded. I don’t take that in a bad way at all, and it proves to me that I’m maybe not capable of creating much that doesn’t at least have a bit of an 80s spin to it. So in that regard, it’s more of the same. But from the perspective that it’s basically an upbeat electronic power pop song, it’s different from anything I’ve released to date.

Why did it take longer to record “Don’t Wait Too Long” compared to the last two singles?

From a production standpoint, there was certainly more to the song compared to other recent releases. I layered more vocal parts than I’ve ever done on a recording. Guitar wasn’t too intense, except for the solo, which is synth and guitar in unison.

I’d composed the solo before I’d ever played it on guitar, so I knew that it would be kind of weird, timing wise. In the end, I couldn’t get the timing down on the first part – which is mostly chromatics anyway – but the guitar joins in for the last 60 to 70% of the solo.

For the mic, I’m using a RODE (of course) Procaster. I also have a NT1-A, which I love, but I’d read that the Procaster also makes for a great vocal and instrument mic, so I said, “why not?” Plus, it’s a dynamic mic, so it cuts down on unwanted noise. I’m pleased with the results.

I’m gradually upgrading as I go, so the next single will probably be recorded on Tracktion T7 along with some new plugins. I’m also interested in miking up my guitar amp (Peavey head and Orange cab) to see what that sounds like, so it’s possible I’ll be going back to a more organic sound for future releases that feature electric guitar.

Where can people find “Don’t Wait Too Long?”

All the usual places, really – CD Baby, iTunes, Spotify… take your pick. I distribute my singles as far and wide as I possibly can, so you could also do a Google search and see what comes up (but remember to search for David Andrew Wiebe’s “Don’t Wait Too Long”, specifically).

There are no physical copies of the single, because I don’t think that makes any sense right now. But it’s possible that, when I have enough music, I’ll put together a compilation of the songs I’ve been recording, and put them on a CD.