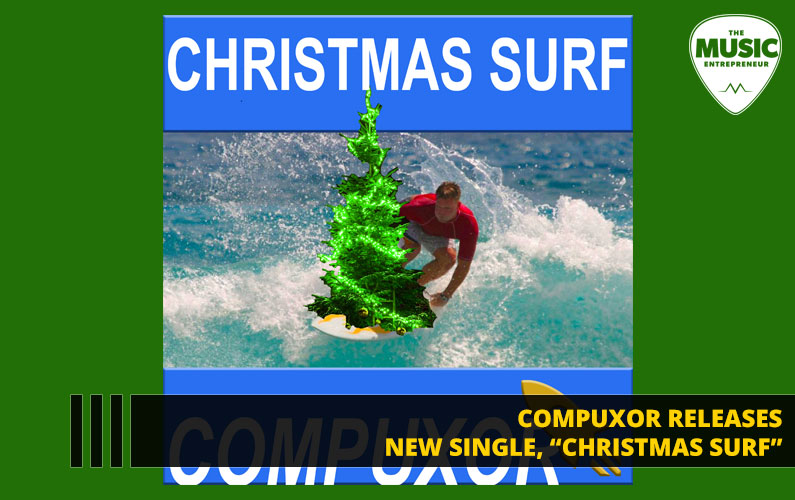 Compuxor? Who is that, and why are we covering them on The Music Entrepreneur HQ?

These questions will be answered in a moment.

What you need to know now is that Compuxor released their first single on December 24, 2017. Its name? The aptly titled “Christmas Surf”.

The title is very much reflective of the contents on the inside. It sounds a little bit like a Beach Boys or The Beatles style song. But it makes references to characters you may never have heard of before.

Let’s uncover the mystery together. We caught up with Compuxor to discuss their latest single, and here’s what they had to share with us.

Why did you choose “Christmas Surf” as your first single?

I’ve put together a few songs for a fun, comedic project known simply as Compuxor.

It didn’t occur to me to distribute the other tracks, which can be heard in our YouTube videos, but that’s something I may still do.

Since we’ve already got a bit of a presence on YouTube, I figured it couldn’t hurt to release music under the Compuxor moniker. It could be one more way to get our name out there and gain more subscribers for our YouTube channel.

So, with “Christmas Surf”, it’s just a fun Beach Boys style track I recorded for our Christmas special. Every time I record something for Compuxor, I typically try my hand at a different style or genre, and this year we decided on surf music.

What is “Christmas Surf” about?

For the last three years, the Compuxor team has been putting together a stop-motion Lego Christmas special called “Wommy Saves Christmas”.

The main character, Wommy, is loosely based on Tommy Wiseau of The Room fame.

So, the song is basically about the Christmas special itself. There are a lot of references to pizza in the feature, so I had to work this line in: “So, have a slice of pizza – join Wommy and his friends”.

The song is mostly nonsensical, as they tend to be when they’re comedic in nature. And, more than anything, the song just creates a fun, lighthearted mood that lends itself well to the content.

I’ve also recorded songs in other styles for the YouTube channel – folk/country, 90s alternative rock, electronic/dance, and so on. There’s also an unreleased new wave song for which we intend to create a music video for.

So, every time I go to work on a Compuxor track, I’m doing something a little different, which is fun for me. I get to emulate the stylistic approach of other artists, which is something I like to think I have a knack for.

I don’t know if “Christmas Surf” is unique, per se, even conceptually, but it’s fair to say I’ve never recorded anything like it before, and it’s my own take on surf music, which makes it at least a little bit unique.

Okay, it’s no secret that Compuxor the artist is David Andrew Wiebe, founder of The Music Entrepreneur HQ. Yes, I’m referring to myself in the third person.

But I could not do everything I do without my partner in crime, Karlo Keet of Catstar Images.

Compuxor was just one of many blogs or websites I started around the same time, and somehow ended up being one of the few projects that survived.

I wanted to involve a lot of people in it, because I saw it becoming a site like The Onion or Distractify. But it was definitely a side project – not something I was planning to invest a huge chunk of my life into.

Today, we publish the occasional video to our channel and have a lot of fun with that. It would be cool if we could get it to the point where we’re releasing one video per week, but I’m not promising anything, and that may not happen any time soon, because everyone involved has a life of their own.

Here’s a rundown of what I used to record “Christmas Surf”:

Where can people find “Christmas Surf”?

You should be able to find it just about anywhere online you go to buy or listen to music. Try CD Baby for now, because that’s the most reliable destination right now. Others should eventually come online though, and be indexed on Google, such as iTunes, Google Play, Amazon, Spotify, Deezer, and the like.

Have a listen, and let me know your thoughts in the comments.