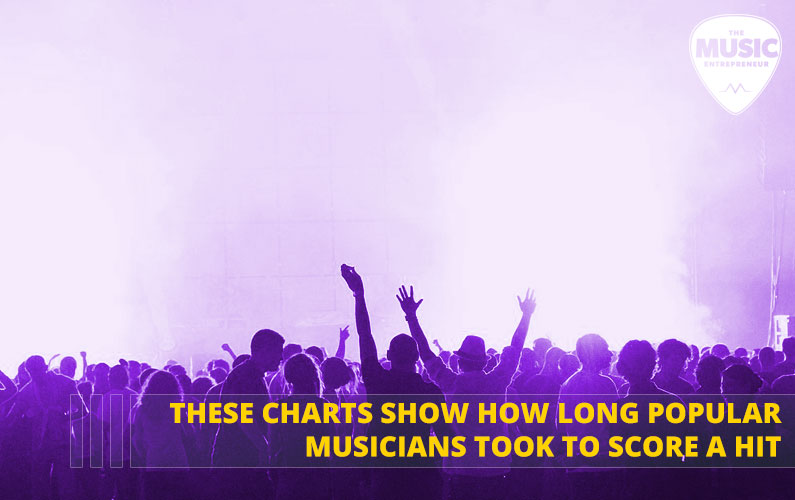 This post comes to us via Matt Lindley. Stimulating stuff!

If you think you’ve got what it takes to write something for us, we are accepting submissions. But we won’t take just anything!

Now, let’s find out why you shouldn’t give up if your first album is a flop!

If you’ve been plugging away for a while in your music career without landing a big hit, you may be pleased to know that it happens to the best of them.

Gocompare.com has created an interactive chart that visualises the careers of Rolling Stone magazine’s 100 greatest artists of all time and plots how long they took to score their first top 10 single in the UK or US. The results may surprise you.

Keep Calm And Carry On

Many iconic acts waited years for their first hit.

While some artists like The Who and Sly & The Family Stone scored their first top 10 almost overnight, many of the biggest names in music plugged away for years before reaching the top. Ray Charles, Johnny Cash and Bruce Springsteen all took more than a decade to achieve their first top 10 single, while rock gods the Grateful Dead took a full 40 years between forming and reaching the top 10.

You Can Achieve Success Without a Hit Record

The lack of a record that captures the wider public’s imagination is no barrier to success. The chart shows that numerous seminal acts never reached the top 10 in the UK or US charts.

Experimental rock supremo Frank Zappa enjoyed a critically-acclaimed 38-year career without ever reaching the upper echelons of the singles charts. The same can be said of Howlin’ Wolf, Hank Williams and even the Velvet Underground.

Some Paths are Better Than Others

Pop acts had the shortest wait for a hit.

Pop and rock acts tend to have the clearest route to the top. The Beach Boys, The Beatles and impresario Phil Spector all had a hit within two years of starting their careers, but if you’re in a more niche genre such as hip-hop, it will require more patience.

The chart shows that the likes of Dr. Dre, Tupac, Eminem and Public Enemy each took more than eight years to achieve their first top 10.

The one thing that all of the acts have in common is that they were brilliant at what they did. From Chuck Berry’s career spanning half a century to Cream’s two year stint as the world’s biggest super-group, the list is made up of artists who were dedicated to their love of music. So perhaps the biggest lesson is to love what you do – otherwise you might not appreciate where it gets you.

Matt Lindley is a writer, musician and creative marketer based in London, England. Music-wise, he enjoys everything from Morrissey to Merzbow and still thinks that CD is the best format. If he isn't playing synth or listening to new sounds, he's probably off traveling. You can follow him on Twitter: @MattELindley.