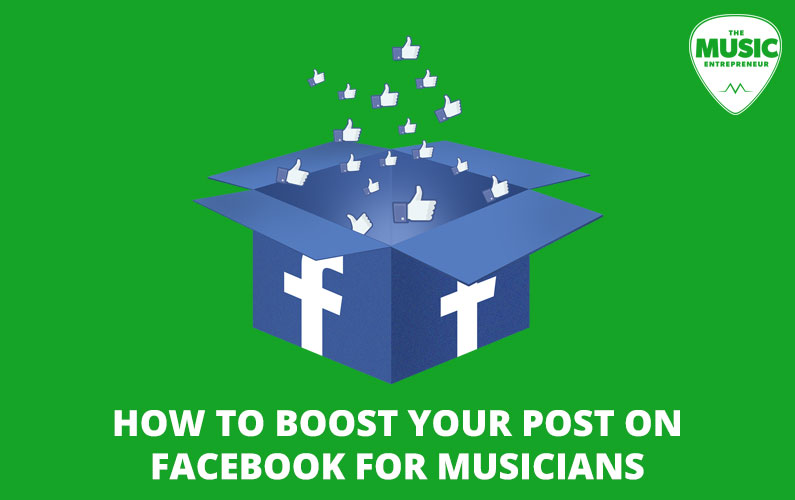 How do you boost a post in Facebook? Why would you want to? What are some best practices to follow to get results from your ad spend?

In this video, we’re going to take a look at a few simple steps you can follow to maximize the results of your posts on Facebook.

Hi, this is David Andrew Wiebe with The Music Entrepreneur, and today I want to show you how to boost a post in Facebook.

This is something you might want to do if you have a post that’s already doing well and getting a lot of attention, and get it out to more people. And the reason why you would want to pick a post that’s doing well is because it has a fair amount of traction already. So you know that if it already has “likes”, comments, engagement, clicks, and so forth, that if you boost it, it’s only going to amplify the results. Meanwhile, if you boost a post that’s not doing quite as well, well, you’re not going to get as good of results.

Next thing you’re going to need – hopefully you’ve populated your page with a few posts already, maybe somewhere in the range of 10 to 20, because otherwise we’re going to have a hard time comparing which of your posts have done well over others. Facebook’s actually really good about tracking data and insights on your behalf.

But a very simple way to find the number of people that it has reached is just to look at the posts. So if I scroll down, I can see that this post reached nine people. This one it was 27. 36 for this one. Eight for this one. Nine for this one, and so on. Now, I do have some higher performing posts in my archives too. And you can see that I’ve already boosted this one for $24. So for the next 24 days, this post will be boosted for a dollar per day.

But let’s say, for example, that I wanted to boost this post, which is “Are You Hustling & Grinding in Your Music Career? 5 Warning Signs of Burnout”. I know there’s a typo there, I actually corrected it already. So, we’ll click on “Boost Post”, and that’s going to open a new window for you.

The first thing we need to take a look at is Audience. This is just who you’re targeting. Do you want to target “People who like your Page”, “People who like your Page and their friends”, “Default Audience”, David Andrew Wiebe – which in this case is me – and “Lookalike”, which would be people like the people who already “like” your page, and Facebook figures that out based on what interests they already have.

Now, two of my favorite options are “People who like your Page and their friends”, so you get some immediate engagement from people who have already demonstrated interest in your page as well as their friends. So you’re getting out to more people that probably haven’t heard of you, or don’t know about you.

Then the other option that I like is the “Lookalike” audience, which is primarily targeting people that probably haven’t seen your page, but people like the audience that you already have. So based on the “likes”, and your overall following, Facebook will find people like them, and put your ad in front of those people. So that’s why I like those two options.

Now we’re ready to scroll down to Budget And Duration. First, I suggest looking at Duration, so how long do you want the ad to run for? Obviously, the more you spend and the more days – or the longer the ad is running for – the more exposure it’s going to get. By default, you can choose one day – which isn’t going to do much for you, seven days – or 14 days. You can also choose to run that ad to a specific date. So that other post that I already boosted, I am having it run until September 30, for example, so that’s 24 days from now.

Now, we also have to adjust the Budget based on your Duration. That’s why I suggest picking how long you want the ad to go for first. Facebook only allows you to spend no less than a dollar per day. So that means that if your post is running for 14 days, you’d have to set the budget for $14. Now you can spend more if you want to, or have the duration set to the same amount. So you could, for example, make your budget $100 and then run the ad for the same amount of time, 14 days. Let’s take a look, because that’s going to change the number of people that we reach. So if I enter $100 in there, it goes from about 4,000 minimum to 7,200 minimum. But we’re going to leave it at $14 for now.

So the Estimated People Reached based on the Duration as well as the Budget of the ad is 4,300 to 11,000 people, which sounds like a lot, but running ads won’t guarantee you an audience, and it’s not going to propel you to stardom overnight. It will help you get more exposure for your post, more clicks. And if you’re amplifying a blog post like I am, the benefit there is that people will sign up for your email list, and you’ll be able to grow your email list by boosting your posts.

Now if you scroll down, there are a couple more options for you to adjust. There’s the Tracking Conversions by Choosing a Pixel. That’s a little more advanced, so we’re not really going to get into that. And then you would just enter your payment information below that. I already have a credit card stored in there, but I’m not going to show you that, alright?

So once you have that all set up, you would just simply click “Boost”, and then Facebook would approve your ad, or not approve it, depending on the content. But most of the time, a post that’s already on your page is easy to boost and you probably won’t find a lot of problems with it. And that’s it. So once you’re ready to boost, just click on that “Boost” button, and away you go.