Is It In My Best Interest To Produce My Own Demos? 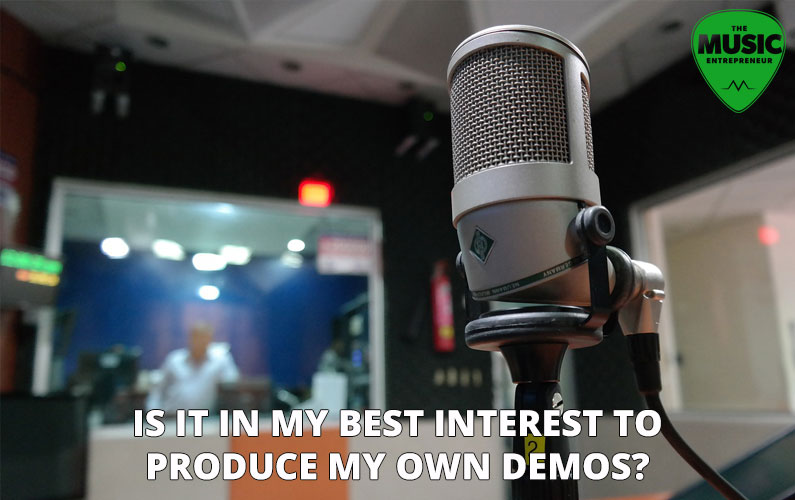 At some point, you will find yourself in need of polished, professional-sounding demos.

A demo might be a prerequisite to get booked in a certain venue. It might be a necessity when entering a radio contest. It could be that a local independent filmmaker wants to know what you sound like so they can figure out whether or not they want to use your music in their upcoming movie.

Whatever the case, you find yourself wanting to put together a demo, and you’re wondering how to proceed.

Here are some thoughts on whether to produce your own demos or not.

You May Want to Produce Your Own Demos if…

You can say – at least with some certainty – that nobody knows your music better than you do.

You know what you like. You have a pretty good idea about how you want your songs to sound, how to arrange them, and what instrumentation to use.

When you already have a strong musical identity, compromising it seems like a waste of time and energy. You know what you want to accomplish, and your personal philosophy is that everything you do should bring you closer to your clearly defined vision.

Assuming you have the technical proficiency and gear to record and mix your songs, and you can get the kind of results you’re looking for, producing your own demos might be your best bet.

You May Not Want to Produce Your Own Demos if…

You don’t know your music that well. You’re still a little shaky on what it means to be you.

If your musical identity is a little foggy, and you’re not sure what you’re after, even your best efforts won’t bring you closer to your vision. At this point, you’re probably still feeling it out and experimenting.

Plus, you don’t really have the technical skills or gear required to record and mix your songs. You’re not sure you can get the results you’re after, and you’re not sure what that would look like, so producing your own demos doesn’t make any sense.

Which of the above scenarios do you resonate most with?

Obviously, the above examples are on extreme ends of the spectrum, because if you were actually the second type of artist, you probably shouldn’t be (and wouldn’t be) producing demos at all. At least not yet.

I think you can now see what some of the most important considerations are in this matter of choosing how to go about recording and preparing demos for submission and distribution.

For instance, even if you have the right gear to make a high quality demo, if you don’t know how to use it to get the kinds of sounds you hear in your head, you might as well bring in an experienced engineer to help you with the project.

Or, if you’re pretty confident in your songwriting ability, but you’re just not sure how you could arrange your songs to have more impact on the listener, you may want to collaborate with somebody that can help you make some magic happen.

The key is to identify the holes in your knowledge, your skills, and your ideas. You may be able to produce a great demo all on your own, but what if you could produce an awesome demo with the help with others? What if you were strong in one area, but you knew someone that was even stronger in that same area? It would be silly not to partner up with someone you like and trust.

Other Key Factors (Do Not Skip Over!)

I would love to leave it there and let you figure out the rest. But the music industry is sometimes very selective about the artists they choose to work with, and going about things in the wrong way could sooner play a part in sabotaging your career than in getting you ahead.

So here are some additional considerations you will have to be aware of, especially if you’re looking to build industry connections to move your career forward:

Even after covering all of the above (I know it’s getting lengthy at this point), one thing we must remember is that music is subjective. There is no escaping this fact. And the industry person you’re trying to impress may not care for your style of music. Or maybe, you just aren’t that talented, and no one has told you yet. It can be a harsh reality to face.

If you love music, and you want to continue down that path in spite of criticism and rejection, I’ll be the first to cheer you on. Don’t worry – you can always get better, even if you aren’t naturally gifted. There are plenty of examples of artists that, against all odds, persevered and became a success.

When it comes to this issue of producing demos, there’s one guiding question that will help you to move in the right direction: what am I trying to accomplish with this demo? You might have to dig really deep into that question to get the right answers, but once you’re aware of all of the factors, you’re ready to put together a demo that will get you the gig, the grant, the contract, whatever it is you’re aiming for.