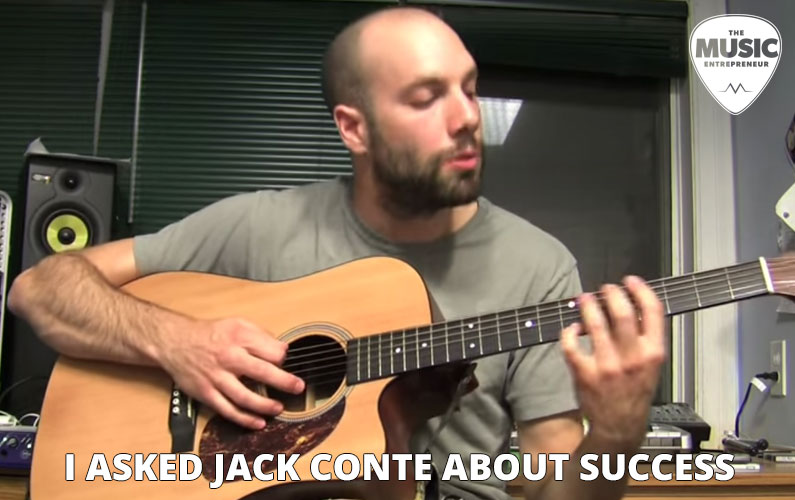 Jack Conte is one-half of the band Pomplamoose, an act that initially found a following on YouTube with the video song, and quickly expanded their efforts to include music releases and live performances. Jack is also the founder of Patreon, a micro-crowdfunding site for creatives where people can fund their favorite talent on an ongoing basis, in small amounts.

I recently posed this question to him:

What mental blocks or obstacles did you have to overcome to find success as an artist (and entrepreneur)? What drove you to keep experimenting when there was no assurance that you’d eventually connect with an audience?

In his response, Jack was quick to say: “what a thoughtful, important question. It’s THE question, really…” indicating that mindset is the number one thing that holds artists back.

Painting in the Dark

First, Jack pointed me to a video that he said summarizes his thoughts on this topic better than even he could express them. Here is that video:

The Long Game Part 3: Painting in the Dark from Delve on Vimeo.

Here are some things I took away from this video (in case you choose to skip it, or you just want a quick summary):

Making art “in the dark” (for no one, for no audience, for no people that care about it) is excruciatingly painful.

The only reason to do it is if you love making art.

Obstacles Jack Had to Overcome

Here are some of the other mental blocks and obstacles Jack said he had to overcome:

Jack shared these struggles with me in point form. I was most fascinated by the last point (as I’m sure you are too).

Usually, the message we hear out in the world – maybe not overtly, but certainly subconsciously – is the opposite. To suspend emotion and put logic (metrics and results) ahead of feelings (fulfillment, joy, hunches, etc.).

Fortunately, Jack pointed me to a blog post where he wrote about this very thing, aptly titled “I’m f*#$ing terrified” (censorship mine). You’ll find my analysis below.

Suspending Logic in Favor of Emotion

Here’s a summary of what Jack’s blog post conveys:

As I reflect on this, I’m reminded of what John Flansburgh said about his Dial-A-Song project in the They Might Be Giants documentary, Gigantic (A Tale of Two Johns). He said:

The massage parlor ads cost 50 bucks and the personal ads cost 10 bucks. So, I actually told them that it was just my personal message. I had this Dial-Song-Service. They’re like, “is this a business?” No. “Is this like promoting something?” No. Just my thing. It’s my little trip. Leave me alone. I would pay my $10 every week.

I can’t help but relate this to my current situation – the money and energy I continue to put into The Music Entrepreneur HQ. I’ve never put this much money into advertising before. I’ve never been more serious about what I’m doing at TME and the ways in which I’m helping musicians and music business owners. And certainly, I have made some money along the way.

But TME is still unproven and untested. There’s no assurance of a return on investment. I may not be taking as huge of a risk right now that Jack once did, but I’m taking a risk just the same. Maybe, as Jack’s story proves, I’m on the right track as I move into my “discomfort zone.”

But I’m making “my art” in the form of blog posts, podcast episodes, and videos. If that wasn’t fun for me, I’m sure I wouldn’t still be doing it. And maybe that’s enough.

If I’ve learned anything from the above, it’s that we can’t control outcome, but we can control output. And when we focus on the fulfillment we gain from an activity, that in itself becomes the reward.

Just like you, I create because I want others to discover, dig into, and appreciate my work. But focusing on the work gives me more peace than focusing on the results. Thinking about results tends to drive me towards comparison, which I know is unhealthy.

What do you think? Do you tend to focus more on the work you’re doing, or more on how it’s producing a certain outcome?