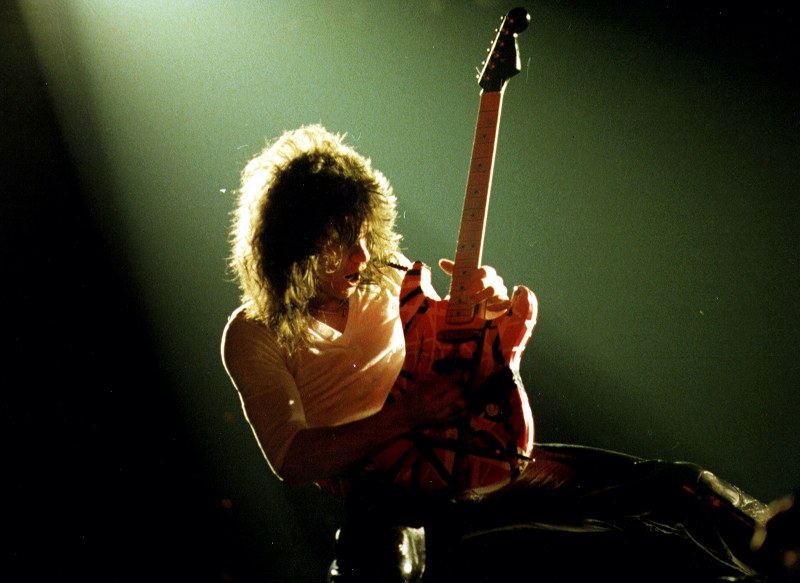 Do you play guitar?

I’m not sure if you knew this about me, but I’m probably more known for my guitar playing ability (especially in the “real world”) than I am for my blogging or podcasting efforts.

Here’s me jamming out a funky riff on guitar:

The whole reason I got into podcasting is because of my music career. Initially, I wanted to use podcasting as an outlet to promote my music. However, it wasn’t long before Lucas asked to be on the show, and the rest is history.

That change in direction was a welcome one, because I never wanted to make my podcast all about me. However, podcasting was still relatively new to me at the time, and I didn’t yet have a solid format or template for what I was doing.

That’s another story for another time, but for reasons you’re about to find out, I attribute a lot of my creative capacities and mental sharpness to learning the guitar. There have been tremendous benefits to playing guitar outside of writing songs and building a music career.

Here are seven compelling reasons to start learning guitar (or any other instrument, for that matter).

1. Guitarists Can Synchronize Their Brains

It’s much worse than we originally thought. Guitarists can actually read each other’s minds!

There’s an article entitled Science Shows How Guitar Players’ Brains Are Actually Different from Everybody Elses’ by Jordan Taylor Sloan that has been gaining a lot of attention lately. According to Sloan:

…guitarists literally have the ability to synchronize their brains while playing. In a 2012 study in Berlin, researchers had 12 pairs of guitarists play the same piece of music while having their brains scanned. They discovered that the guitarists’ neural networks would synchronize not only during the piece, but even slightly before playing. So, basically, guitarists can read each others’ minds better than they can read music.

This might also explain how and why jamming works. It’s a bit of a mystery for non-musicians, as they have a tendency to think jamming is all improvised, but the reality of the matter is that – in jam sessions – there is usually a framework or a basic structure that everyone follows. However, a little mind-reading never hurt anyone’s chances of coming out sounding like a pro!

…guitarists are just super spiritual, intuitive people. Think about anyone from the Jimmy Page to the Edge right on up to Bon Iver. That sort of intuitive thinking runs all the way to how they learn. Unlike musicians who learn through sheet music, guitarists, according to researchers at Vanderbilt University, get a better grasp of a song by looking at someone playing it rather than reading the notes on paper.

I hope he doesn’t mind me saying this, but Daniel is perhaps one of the most spiritual and intuitive people I know. Oftentimes, the context of an entire conversation would be laid before we even got together and started talking. Or, should I say, it’s as if he had read my mail.

Granted, him and I do share similar talents, a similar personality, and even a similar back-story. Even then, I’m not sure he would be as attuned to the spiritual as he is if he wasn’t a guitar player. 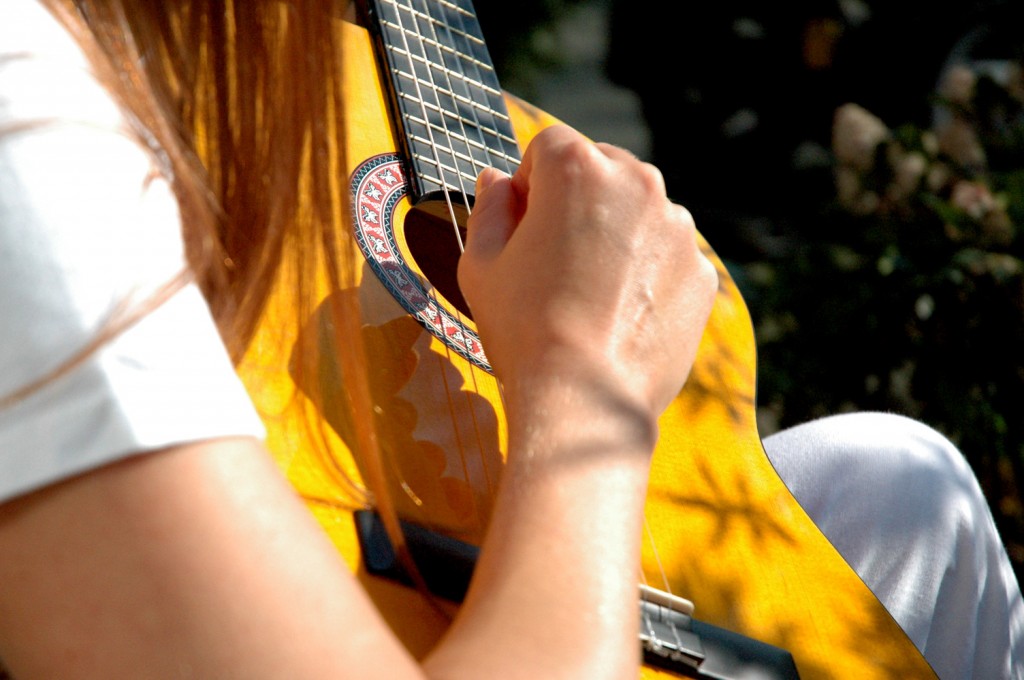 According to Men’s Health, there are studies from the Mind-Body Wellness Center and Loma Linda University School of Medicine and Applied Biosystems that show that playing the guitar – or any instrument in general – can help reduce stress.

Jonathan and I have talked about this quite a bit, but we feel that stress reduction is merely a side benefit for career-minded musicians. One of the realities of practicing and honing one’s craft on any instrument is that it is usually done in isolation. Forsaking social events, dating and weekend partying, musicians stay home to work on their craft, especially in their early stages of development.

My former roommate Adam once said something to me that underscores conventional thought: “guitar playing allows you to wind down from a long day and de-stress. It has nothing to do with work.”

The bit about de-stressing may be true, but my dedication was more rooted in my desire to be the best guitar player I could be. To say that it wasn’t work or that it didn’t require persistence and sacrifice is stretching the truth.

For hobbyists and weekend warriors, however, this is an awesome “side” benefit.

4. It Can Sharpen Your Brain Functions

Jonathan (the same one I mentioned earlier) is one of the wittiest people I know, and that should tell you something. By his own admission, he is more of a songwriter than a guitar player, but the guitar is what allows him to write those songs.

I’m pretty sure I’ve talked about the fact that I’ve felt like an entirely different person since moving (and I keep on evolving). Now that I’ve had some time to deliberate on that fact, it’s hard for me to deny that playing guitar has also had an effect on my sharpness.

And there’s science to prove it. According to the same Men’s Health article, there is a new Scottish study showing that if you play the guitar (or any musical instrument), you are more likely to have sharper brain function, and it can also guard against mental decline.

Last weekend, while in Barrhead, I overheard my grandpa ask how to keep his mind sharp. I wasn’t joking when I suggested playing the guitar, among other things.

5. It Can Lead To Other Opportunities

This one is particularly interesting to me, as it gives a scientific insight into some of my recent career choices. Consider this quote from the Men’s Health article:

Researchers from Michigan State University found that musicians who picked up an instrument at an early age and continued nurturing their craft throughout adulthood had a better chance of launching successful invention—logging patents, building businesses, and publishing pieces.

Of course, I didn’t really start at an “early age”, though I don’t think that makes as much of a difference as they claim it does. Starting at a time when you are teachable and malleable is important, but I’ve talked about the fact that – in my opinion – you are about as teachable as you make up your mind to be.

Moreover, if what they say about intuition is true, then the less the mind is involved in the learning process, the better.

If guitar playing can indeed foster creativity in other ways, it would explain my tendency to want to publish pieces and build businesses.

6. It Can Contribute To Your Heart Health 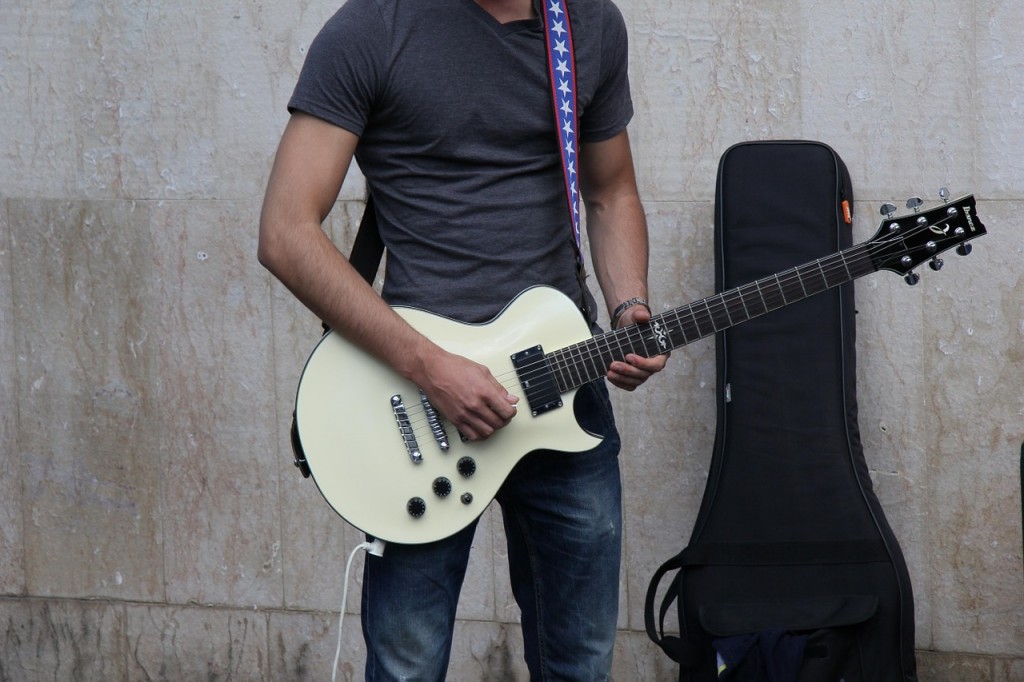 Researchers from the Netherlands found that patients who practiced music for more than 100 minutes a day showed a significant drop in blood pressure and a lower heart rate than those who didn’t.

My dad, my uncles, and my grandpa have all had heart issues. My grandpa passed away as result of heart failure, though my dad did not live long enough to suffer from heart-related illness (he was killed in a motorcycle crash in Japan). My grandma mentioned the fact that her sons all had to get their hearts checked at or around age 30 because of a murmur.

I have also had doctors tell me that my blood pressure is high, though it might just be the fact that I get a little nervous around those buggers. Anxiety causes your blood pressure to rise; go figure.

Anyway, if playing the guitar can help with my blood pressure, I’m all for it!

7. It Gives You A Workout

According to the previously mentioned Men’s Health article, music makes exercise less exhausting. That doesn’t have a whole lot to do with guitar playing specifically, though it is a testament to how valuable and powerful music can be.

Notwithstanding, there are other articles that underpin this notion; that playing guitar actually gives you a physical workout. This might also explain why it reduces stress, sharpens your brain functions, and contributes to your heart health.

Ironically, I think I gained the most weight during my most intensive practicing days, from 2001 to 2009. That may have had more to do with a bad diet, a lack of exercise, and a tortured mental state, however. It didn’t make for a healthy person, but it did give me something to write about!

Filed Under: Learning & Playing An Instrument Tagged With: Guitar