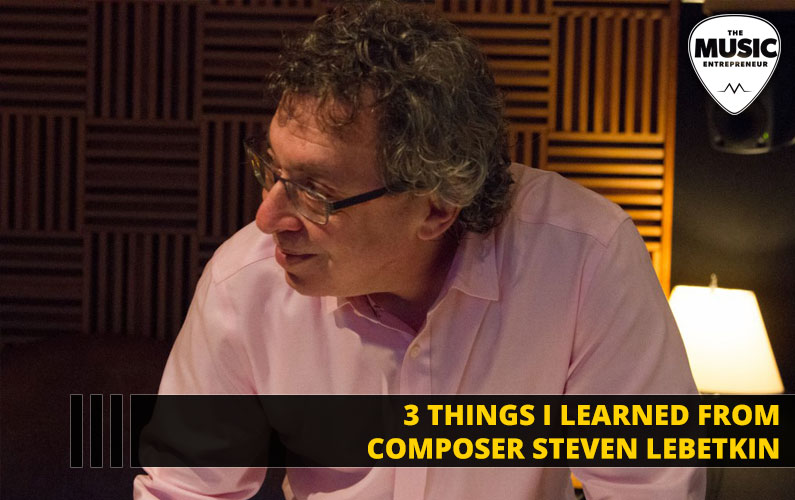 I recently had the opportunity to interview Steven Lebetkin on the podcast.

I don’t know about you, but composition is something that has fascinated me for a long time. I’ve done a little bit of composing over the years, though I certainly wouldn’t say that I’m a well-trained and experienced composer. It’s just something I did because I enjoyed it.

And, I can certainly see it being something I will be doing more in the future because some of my friends and colleagues see me as being a skilled composer (particularly with video game style music). I will probably be taking advantage of my skills in this area for my future releases too.

In any case, I wanted to take some time to reflect on what I learned from my conversation with Steve, and maybe you can take away something from this too – especially if you’re interested in getting into composing or taking your skills beyond.

1. To Reach A Broader Audience, You’ll Want To Explore Compositional Styles Outside Of Classical Music

Steven holds that classical music is on a steady decline.

Now, when you think composer, you might immediately think of video games, movies, TV shows, commercials and so on. And no question a lot of music is composed for these mediums.

But this isn’t to say you should limit yourself as a composer. Your music can reach a broader base of fans, especially if you embrace the idea that composition doesn’t need to be reserved for the classical tradition.

You can compose music and have your fans buy it and stream it, just like you would with any other style of music. The key is to create music that has the chance to appeal to a broader audience, regardless of the style.

As a composer, both licensing and placements and traditional sales are worth exploring. If there are opportunities to be had, you shouldn’t ignore any possibilities.

Personally, I love music that has the potential to work on many levels – in a video game, in a film or even just as background music while you’re working. I think that’s exactly what Steve means when he says, “music that appeals to a broader audience”.

2. Composing At A High Level Requires A Lot Of Education & Training

Can anybody be a composer?

Well, the answer to that question probably depends on who you ask, as well as what level you’re aspiring to.

As I already mentioned, I’ve tried my hand at composing, and I feel like I was able to create some cool mood music. But none of my music has found its way into media, and not a lot of people have heard it either.

As Steve contends, I think composing at a high level requires a lot of education and training.

This isn’t to say that some of the people who are regularly called upon to compose for TV shows and movies are the best in the world. I think that composing – along with media – has gradually shifted in a more commercial direction. And, this means there isn’t always a lot of thought that goes into the music we hear these days (ever notice how every movie soundtrack sounds the same and doesn’t have its own distinct identity?).

When you think of composers who’ve stood the test of time – like Ludwig van Beethoven – there’s a reason why their music is considered timeless. There was a lot of thought and care (and let’s face it – blood, sweat and tears) that went into it.

So, while I’m not saying that you can’t find your niche or fan base as a composer without a lot of training, education and experience, you certainly won’t be able to compose at a high level if you don’t.

3. The Ability To Self-Edit Is Rare – But It Will Open The Door To More Opportunities

I love the analogy Steve used to nail this point home (probably because I’m a writer as well as a musician).

When a writer puts the finishing touches on the manuscript of their book, in some ways, the work is just beginning. Now it’s time for an editor (or a team of editors) to comb through the prose and assess the overall cohesiveness of the book.

A book is a major undertaking. And, when publishers are looking to launch a new book, they want it to appeal to as broad an audience as possible. In addition to the usual grind of sorting through the grammar, punctuation and spelling of a piece, editing could mean removing huge segments of text, changing the order of chapters, rewriting parts that don’t connect to the theme of the book and more.

So, the importance of editing simply can’t be understated. Sometimes what makes a book a book is the editing.

As musicians, we can easily become precious about our works, holding fast to our vision of a song. Once it’s written, we often don’t want to compromise or budge on the arrangement.

Steve notes that when composers are asked to edit their work, they often go, “What do you mean edit? I’m wasn’t looking to make any changes”. They have a hard time comprehending why editing is necessary to begin with.

So, the ability to self-edit will make you stand out from the crowd. If you’re looking to pursue licensing and placement opportunities, decisionmakers will love working with someone who can tweak their music to suit the mood of a clip or scene.

This skill may take time to master, but if you’re serious about composing, it’s well worth the effort. If you’ve been trained in composing, then you should have the skill set and theory knowledge necessary to adjust your piece as necessary.

If you want to compose at a high level, it’s going to require years of training and hard work. You’re going to want to dedicate yourself to the craft and keep studying.

But for those who can’t imagine doing anything else, I can’t think of a more fulfilling job. The ability to engage in your passion on a daily basis and reach a large audience with your craft is an incredible privilege.