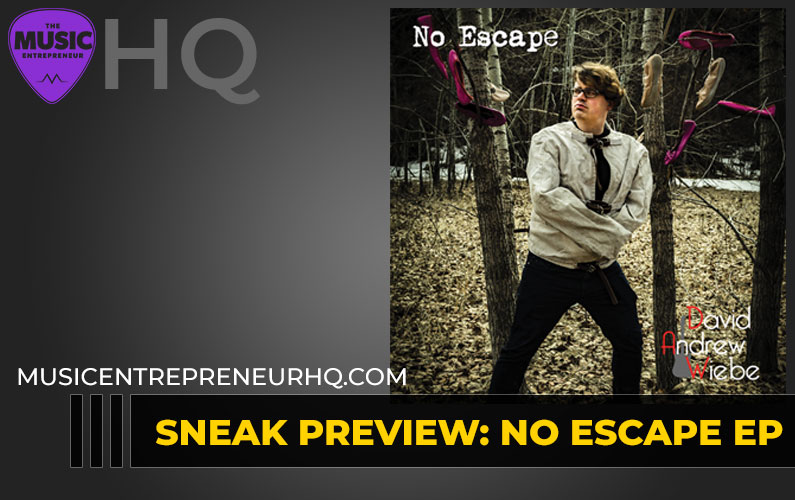 You may have heard me reference my “forthcoming EP” a few times and wondered when it was coming out.

Well, in this episode of The New Music Industry Podcast, I offer a sneak preview into the No Escape EP, which will be hitting online music stores and streaming platforms any day. Enjoy.

Any day now, my latest solo release, No Escape will become available on all online music stores and streaming platforms.

But because I wanted to do something special for you, I put together a sneak preview for the EP right here on the show.

As a listener of The New Music Industry Podcast, you’ve shown that you’re looking to take your music career or business beyond and that you’re willing to invest in yourself.

Although it’s been said many times by many people, it’s worth saying again – there are few things as important as your willingness to invest in yourself.

Most people will go through life investing in their education to get a job. But if you’re a listener of this podcast, it’s clear you’re looking to live a different kind of life. You want to live your passion and not be constrained by anything.

You’re special. That’s why I wanted to give you a sneak preview of my forthcoming EP, No Escape.

Now, usually the term “sneak preview” is reserved for an early viewing of a movie.

There are no music videos yet, and I have not filmed a movie in connection with the EP. So, this is a sneak peek into the music, what prompted me to write and record the songs I did and how they came together.

The first track on the EP is the title track, “No Escape”.

I wrote this song in fall 2017, which is hard to believe.

In the months leading up to writing “No Escape”, I noticed that my life was synchronizing with my best friend’s, sometimes in subtle ways and sometimes in more overt ways.

So, while “No Escape” was written about my best friend, the truth is that I was going through the same things she was.

The song is about restlessness and escapism. It’s human nature to avoid problems and difficulties instead of leaning into them.

And, sometimes we feel the need to escape. At times, that can manifest in relatively innocuous daily activities – going shopping, eating out, traveling, visiting the gym more frequently and so on.

But it can also show up as more harmful and destructive behavior – compulsive gambling, drinking, partying, bringing harm to yourself and others and so on.

An entrepreneur, of course, learns to lean into the challenges instead of trying to avoid or escape them. That’s what leads to personal expansion in the areas of leadership, resilience and problem solving.

Anyway, there’s something someone who’s experienced a lot of life intuitively knows. No matter where they go, they take themselves with them.

That means there truly is no escape from your problems unless you’re willing to dig for the core issue. Outside of that, there’s only temporary relief.

That’s the backdrop against which “No Escape” was written.

2008 is when I fell in love for the first time. Of course, I’d had crushes up that point, but I’d never felt how I felt about someone up until that year.

When my heart was broken, I wrote a series of songs to begin the healing process.

I think “Sleepless Blues” was written prior to that time but I was thinking about including it on the same album, to be titled Back on Solid Ground.

That album, unfortunately, didn’t come to be in that space and time.

But I had worked on a couple of demos with my producer-engineer Patrick Zelinski a few years later, and “Sleepless Blues” happened to be one of them.

Originally, I was going to record three songs with him last year, but Patrick managed to dig up the demos we had been working on, including “Sleepless Blues” and “Grace Is Bittersweet”, which resulted in their inclusion on this five-track EP.

Musically inspired by They Might Be Giants‘ “Man, It’s So Loud in Here”, I wrote the music for “Don’t Wait Too Long” around 2012.

Lyrically, I knew what I wanted to do with the chorus but hadn’t written the verse yet.

I dug up the music in 2016 and decided to put the finishing touches on this track. I released it as a single the same year.

This version of “Don’t Wait Too Long” is distinct in that it features more organic instruments.

The song is about the vacuum of depression and the resulting downward spiral.

It’s not autobiographical, at least not in the sense that I was the one who was depressed when I was writing it.

Prior to selling my home in 2012, I was living with a roommate who was going through difficult times and clearly wasn’t happy with his life. I was remembering him as I was writing the verses.

The song is certainly open to interpretation, but how it shows up for me is that if you don’t believe there are good things coming for you, you have no hope, and if you have no hope, you begin questioning your existence.

This version, again, features more organic instrumentation than the original.

I’ve already said quite a bit about the song publicly, but in case you’re wondering what it’s about, it’s not about hope at all. It’s about being in limbo.

I once heard that hell is living the same experiences over and over without any change. Sometimes, that’s how life feels.

So, from the perspective of the song, the writer is seeking answers. He’s saying even though he believes good things can happen, he never sees any evidence of them happening. And, he just keeps waiting.

In that sense, this could even be a song about bad luck, if there is such a thing.

Does this song reflect my life experiences? At times, it has.

I now have a broader perspective on who I am and why I am the way I am and that allows me to step outside of my autopilot way of being.

But if that weren’t the case, I’m not certain there would be any hope.

The final track on the EP is “Grace Is Bittersweet”, a song that I started recording with Patrick in 2013 or 2014. It was written when I was still living in my old house.

I tend not to write folky tunes, so I think this is the closest I’ve ever come to that.

The song is about being human, making mistakes repeatedly and bowing down at the feet of the divine, asking for forgiveness.

But when you know it’s in your nature to keep doing the same things you’ve always done, when you know you’re going to be making more of the same mistakes, grace doesn’t feel liberating at all. It feels like a constraint.

The writer doesn’t have the answers. He’s merely living the life he was given.

What I like most about this song is what Patrick was able to do with it. He added keyboards and bass, which made the song far more engaging throughout.

So, keep an eye open for the release of No Escape, which should be coming soon to your favorite online music store or streaming platform. The physical release will be soon to follow.