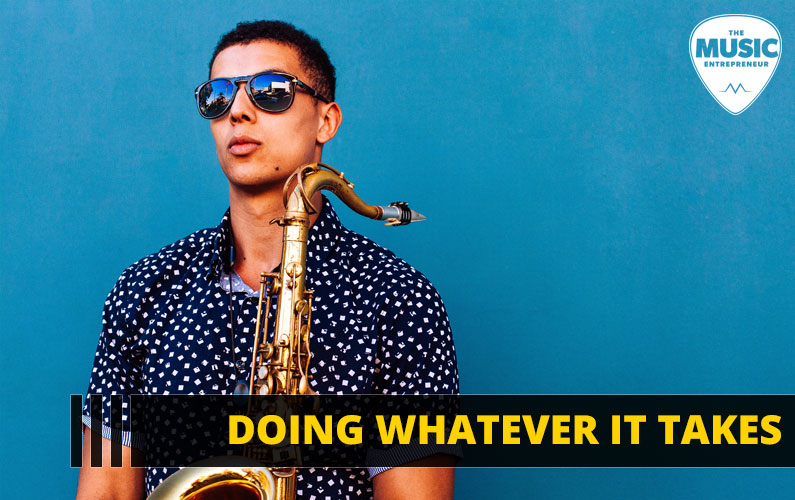 Does it feel like you’re stuck in the rut? Are you trying to get a different kind of result but unsure how to make it happen?

In this episode of The New Music Industry Podcast, I share my mindset around keeping your promises, being a person of integrity and doing whatever it takes to make your dreams a reality?

As I put together the content for this episode, I’m staring at the possibility of having to stay up later than I would like.

This wouldn’t be a big deal if I could sleep in tomorrow. I can’t.

And, the reason I can’t is because I’m flying out to Vancouver for a few days.

Now, why on earth would I be flying out to the west coast in the middle of the week?

The answer is much simpler than you might think – because I promised.

I’m going to Vancouver to witness the completion of a seminar my friend is attending.

Does this decision have financial repercussions? Absolutely.

Will I need to let clients and collaborators know that I will be away for a few days, especially if it impacts them? Definitely.

But I’m a person of my word. And, I knew I would be going to Vancouver months in advance. So, I’m keeping my promise.

My mentors taught me to make the decision first and work out the details later.

And, I will openly admit that there are a lot of uncertainties here.

I know when my flights are and where I’m staying.

But beyond that, I don’t know anything. I don’t even know where the final night of the seminar is going to be held. I’ll figure that out tomorrow.

The interesting part is that this behavior seems weird on the outside looking in, doesn’t it? It’s uncommon.

What’s more common is we let ourselves and others get away with not keeping promises.

And, I’m not suggesting we should be critical of others. Our fingers should be pointed at ourselves first and foremost.

But how can we expect to hold up a standard of excellence for others when we can’t be counted on to deliver on our word?

And, when we don’t deliver on our word – which will happen unless you’re playing it safe in life – do we take the steps necessary to acknowledge the impact we’ve had on others and what structure we’re going to put in place so that it doesn’t happen again?

If that’s not how you think about the promises you make, then it’s important to realize that you can’t be counted on.

Trust me – I’m not pointing fingers here. I’m speaking to myself as much as anyone else.

But I don’t want to build a community of average. I don’t think you want to be average either.

As I’ve shared before, extraordinary results require extraordinary effort. You can’t do what everyone else is doing and expect to get different results.

Although I’ve tried to be sensitive to the needs of the community, I think if we just let ourselves off the hook when we don’t live up to our word, we’re not going to stand out.

I know that it can be scary to step out and express who you really are.

But isn’t the opposite just as scary, if not scarier? What if you just sat on the sidelines and never made an inch of progress in your career for the rest of your life? What would the impact of that be?

Seriously – think about it.

That’s not the type of community I want to create.

That’s the type of community I want to create.

We’re all capable of making a difference in this world. But we must be willing to do whatever it takes.

Have you set goals for the New Year? Then don’t just sit there and wait for them to achieve themselves. Get moving!

Stop being reasonable. Stop coming up with so many reasons why you can’t do something. You do realize none of it’s real, right? Your reasons are all imagined. They only live in your head.

Why am I going to Vancouver again?

I could have come up with dozens of reasons why I shouldn’t go. But I’m not being reasonable. There’s a reason why I’m going. Because I said I would.

If you’re serious about what you’re doing, I should be hearing from you. There’s no way you’ve listened to the podcast to this point and got nothing out of it. Your progress reports should be hitting my inbox.

If you’re having trouble or if you have any burning questions that need answering, those should also be hitting my inbox.

Even if I don’t have the answers, I will find someone who does.

Again, if you’re serious about your career, then examine what’s stopping you from moving forward. It probably has something to do with a lack of willingness to do whatever it takes.