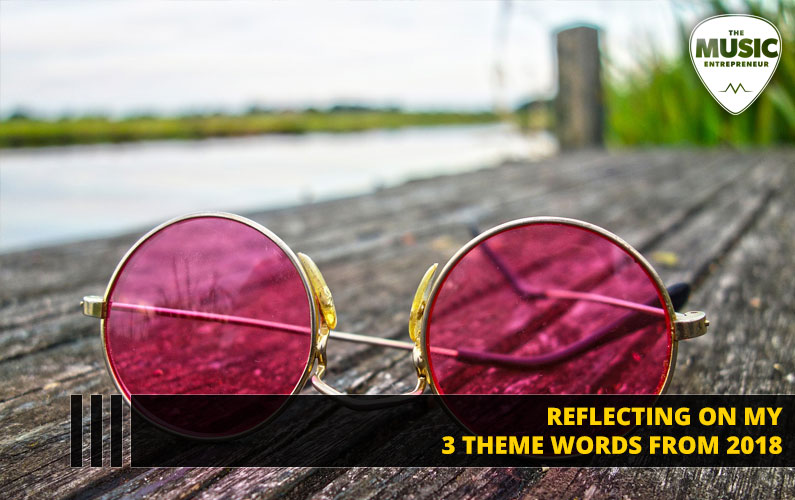 Setting theme words has become a habit of mine in the last few years. I first read about it on Chris Brogan’s blog and decided to adopt the process as my own.

As you begin to think about what you hope to accomplish in 2019, what do you want your year to look like? What intentions are you setting?

Each year, my theme words have a passive impact on the outcomes I experience.

I think of my theme words as intentions. They set the tone for the year, and I believe they even influence the people, events and circumstances that enter into my life.

So, setting theme words isn’t something I take lightly. But I also follow my intuition when coming up with them.

Because I have seen incredible things happen in my life as result of keeping my theme words in front of me, especially in 2017, I’m also quite intentional about the process now. It has become habit.

I always mention this, but I want to let you know that the idea of theme words originates with Chris Brogan. In the last few years, I’ve made it my practice and have adapted it to suit my needs.

So, it’s time to reflect on last year’s theme words and clear the way for the new.

The idea here was to wage war on the mediocre and things that weren’t serving me.

I feel like there was a bit of a prophetic element to this theme word. Maybe I knew that I would have to make tough decisions in 2018.

In the end, I won a few battles. But I’m not sure I won the war.

There were a few people and projects I said “no” to in 2018. And, it wasn’t necessarily easy to say “no”. But I also had to realize some things about my personal value. My time is worth something. And, it’s crucial that the people around me respect that.

Because I’m self-employed, I don’t get paid when people don’t respect that. If you help me, I can help you. But it doesn’t work any other way.

I recall one project that I got knee deep into that in the end I had to let go of. I tend to be a stubborn and giving person, so in the past I probably would have stuck with that project until the bitter end – and been miserable doing it too.

The fact that I stepped away is a victory of sorts.

So, there were a few battles I won. But that doesn’t mean there aren’t some unwanted things that persist in my life.

If I won the war at all – and I’m not saying I did – it’s only because of the personal growth work I did. And, I think that set me up for a better year in 2019.

Initiative was all about taking more initiative in life, especially in the area of personal relationships.

And, again, though I feel like I won some battles here, I wouldn’t necessarily say I won the war.

I now realize the reason for that. I came to see that I had a lot going on in my head around connecting with others. What I now understand is that I didn’t have my actions separate from my reasons for acting.

But the two are not mutually inclusive. An action lives in the real world. Your reasons for doing something only live in your head, meaning they are imaginary.

When I began to understand that, my reasons for doing or not doing began to fade. The only thing left was my actions. And, I either did something or didn’t. Either way, I had to learn to be complete with happened.

In terms of actions taken to further my business, I certainly had some proud moments. I turned some of my pre-existing content into eBooks and handbooks. That was something I was somewhat afraid to do, but in the end, I discovered that there was nothing to fear.

So far, I’ve only heard good things about those products. And, that led to the creation of additional products that will be launched in 2019.

In the last quarter of the year, I also gave myself permission to focus on promoting just The Essential Guide to Music Entrepreneurship Pro Packs and nothing else.

That’s not exactly how things worked out in practice, because I got sidetracked at times, but it was a different approach to launching and promoting a product, and it was worth trying.

Finally, I got around to launching The Headquarters membership, something I’d been planning but putting off for a long time. Regardless of the outcome, I’m proud of the action.

Again, connection was mostly about connecting with people.

And, prior to some of the personal development work I did, I’m not sure I had access to a different way of doing things.

Most of us just try to do more, do it better or do it differently without realizing that maybe “more, better or different” won’t cause a Breakthrough. Breakthrough is possible when we’ve come to understand what’s been holding us back doesn’t exist. It probably just lives in our head.

So, with a new way of relating to the world around me, I found myself able to connect with others in ways I wasn’t able to before.

I’m most proud of helping people understand their identity better. I’ve helped several people tap into that, and I must say the results were moving. I began to see the difference I could make in the world in a new way. I could see the difference it made for them too.

So, in all I must admit that there were some unexpected but pleasant results in this area and with all theme words overall.

In 2018, I attended several personal development seminars, which were all about creating new possibilities.

One exercise they had us do was to talk about ourselves as a possibility. So, in that process, I decided that who I am is the possibility of Confidence, Breakthrough and Fulfillment.

I also decided that these should be my theme words for 2019 as well as the words that represent The Music Entrepreneur HQ brand for the foreseeable future. I find it exciting to have a more defined brand focus for the business.

So, here is how I define each word and how I see them playing out in 2019.

Self-belief forms the foundation of achievement. Without it, you’ll stop yourself short of doing the things you need to do to reach toward your dreams.

And, that’s exactly what I mean when I say Confidence. It’s a necessary ingredient in your personal success. Plenty of things will stop you on that path if you don’t believe in your ability to solve problems and overcome fear.

I believe one of the reasons I chose this word is because I was starting with a clean slate. I wouldn’t have defined myself as confident in the past. But I now see it as a possibility. And, in 2017 I experienced quite a bit of healing that allowed my confidence to shine through.

Now, confidence takes many forms and mine may not appear the same as yours. As a child, I was brought up in Japan, and that has had an irreversible impact on the way I am. But I embrace that. And, that’s a form of confidence too.

Regardless of who you are, you can find your confidence and it begins on the inside.

Although I love helping others achieve more, I’m far more interested in causing Breakthrough in them because I’ve seen the difference it can make. It can be life changing.

So, as an example to others it will also be my mission to Breakthrough on a personal level. That means taking actions I previously would have been afraid of taking.

Fulfillment is what most of us tend to focus on when we set a goal and begin driving towards its achievement.

But Fulfillment also represents the work you do, because we can be fulfilled in doing the work. I find my work fulfilling. Do you?

In addition, Fulfillment means to deliver. So, thinking about the promises you’ve made to yourself, your family, your friends and others, are you fulfilling on them? Don’t focus on how others haven’t fulfilled on their promises. Focus on the promises you need to keep. You are a walking promise, so be the example you want others to emulate.

I know that there’s a lot I’ve promised to deliver on in 2019, not the least of which is the launch of Flashes of Elation. Again, I want to set a good example for Fulfillment.

And, as I’ve already shared, these are the words I want associated with The Music Entrepreneur HQ brand. So, I’m going to be far more intentional in incorporating these themes into the content I create.