12 and a Half Months in a Basement Suite 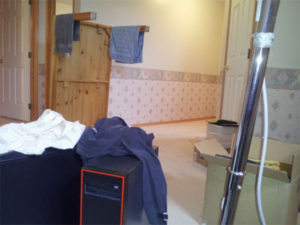 In total, I was there for a little over 12 and ½ months, and the amount of change and personal growth I’ve gone through simply cannot be calculated or documented.

With that in mind, I decided to take a look back on my time at the basement suite, both for my own personal merit (I will be able to put some metrics to my goals to figure out what is and what isn’t working), as well as for the benefit of anyone who reads this. Maybe it will inspire you. Maybe it will help you. At the very least, I hope that it will engage you.

Why I Moved out of My House

Selling my house was tough. Some part of me knew that it had to be done, especially in the last two years or so that I lived there, but I was hesitant. 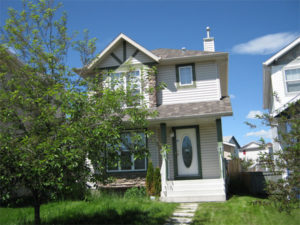 Perhaps I was fearful of the unknown, or maybe it felt like giving up on a dream. Maybe it’s just that you build attachments to places you stay at for so long.

I was there for a total of 9 years. My early adulthood was spent in that environment, trying to figure out what I was meant for and what I wanted to do with my life. Collectively, all of my roommates went through a similar self-searching process (though one of them did try to resist and even threatened suicide at one point).

Regardless, it was important for me to leave the house behind. I was getting further and further and behind financially. The house enabled me to engage in a variety of creative projects, and it allowed me to start various businesses, but the time had come to grow up and take matters more seriously.

Down into the Basement 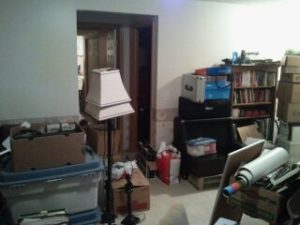 Moving an entire house (albeit a starter home) into a basement was no ordinary feat. There was some purging, for sure, but even more than that, my mom and my stepdad graciously agreed to store some of my unneeded things at their house as well. This gave me a semblance of being organized in my new, smaller environment.

It seems there are two times when we think about purging: before and after moving. Though I did continue to sell, give away and throw away stuff for a while, predictably, I settled into a busy routine and stopped doing much about it.

However, I did have many creative ideas as to what to do with certain things, and that bleeds into some of the projects I am either working on, or will be working on in days to come.

I seem to recall that my original goal after moving was to “empty myself creatively” over the course of the year. Sounds like a pretty ambiguous (and ambitious) goal, I’m sure.

The result? In the process of “emptying myself”, I actually ended up becoming all the more creatively inspired, leading to present day where I am doing fulfilling (and paying!) creative work on a daily basis.

I don’t think that’s the way I saw things going. In fact, had I kept going in the direction I was going in, it’s possible that I would not be writing this post at all.

I thought I would be leaving behind many of my projects to focus on enterprise, and to a degree that did happen, but having realized the futility of trying to become someone else (or someone that I’m not), I decided, once again, to embrace myself.

From Musician to Online Marketer

The biggest change that took place was that I gradually phased out a lot of my music projects, including my recording studio. It wasn’t – nor was it ever going to be – a complete departure from music. That was not my intention.

However, I knew that I did want to leave teaching behind. I felt that it was personally taxing and draining in ways that I cannot completely describe. Through it all, I had bouts with chronic fatigue and anxiety, which may well have been symptoms of personal growth too. However, undoubtedly, bad stress also played a part.

I think we all have moments where we wonder what exactly we’re doing with our life. I came to this point rather quickly in my teaching career. I still love leading workshops, but for some reason individual lessons just make me exhausted by the end of the day (or sooner).

What I realized was that I wasn’t able to do music on my own terms. It always seemed like I was trying to cater to someone else, be it students or other musicians or clients, perhaps because I believed in them more than I ever believed in myself.

I do not blame anyone or anything for my lack of perspective or foresight. I think I needed to see that there were other ways of going about enjoying music again. It’s like running into the same wall over and over trying to bust through, only to discover that you can actually walk around the wall.

Becoming an online marketer was not only a fairly natural progression based on the skill-set I had developed (even while I was a musician I did all of my website work and a good chunk of my graphical work), I was also able to put a lot of untapped knowledge to use. Progressively, I also discovered my passion for writing.

It would be very difficult to quantify everything I ended up accomplishing in 12 and ½ months. I thought I would at least take a look at the number of blog posts and podcast episodes I published in the time I was in northeast Calgary. I say published, because, it would be harder to determine how many content pieces I actually created in that time (I usually schedule posts in advance). Subtract 10 to 20 posts off the top of the following list for a little more realism.

I guess if I was to add anything to this list, I plastered a couple of new sites online, I helped a well-known company develop their online storefront, and I started building some cool friendships through social media. I continued to build my enterprise too.

I ended up moving for very human reasons.

At my previous place of residence, I didn’t have the privacy or autonomy I would have liked. The shared laundry room was in the basement, meaning the landlord would come down once a week to do her laundry. Because I worked from home, this proved a little interesting to cope with.

I was also paying too much for what was essentially a shared space. In fact, it probably wasn’t a legal suite in the strictest sense. Shared spaces generally cost less than what I was paying.

Overall, my landlord was very sweet and I hold nothing against her, but it was pretty clear that the home needed a lot of attention and maintenance that it just wasn’t getting. This became all the more evident when we were packing and cleaning up. Let’s just say that we found electrical issues as well as black mold.

From One Basement to Another

In essence, I ended up moving from one basement to another basement. I am back in northwest Calgary, and this has essentially been “home” for the majority of the time I have been living in this city.

This basement is a little different though, because I basically have it to myself. I also have access to other parts of the house, so it’s a real shared space.

In all, I have to say that the transition was smoother than expected. Sure, the move wasn’t easy and there’s certainly more unpacking to do, but both my room and my washroom are essentially set up. I’m actually avoiding crowding either of the rooms by cluttering them up. The rest of my stuff is spread across the unfinished portion of the basement, and I will continue to organize it in days, weeks and months to come.

Filed Under: News Tagged With: retrospective