102 – The Upsides & Downsides of Playing in a Tribute Band 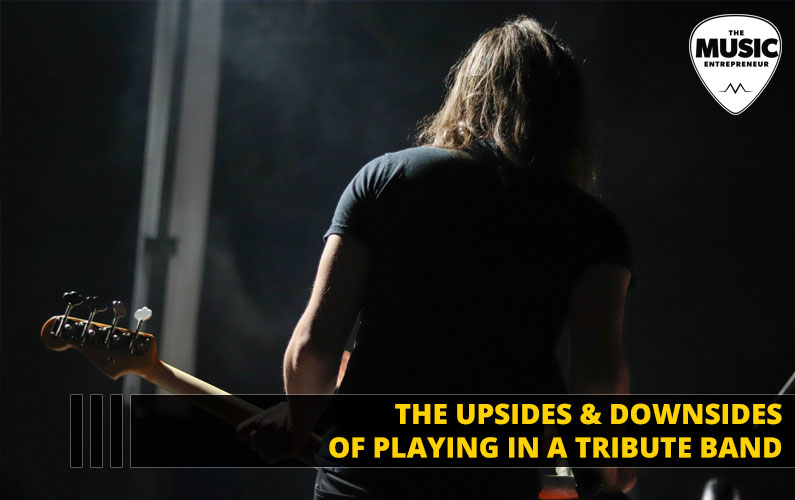 Are you thinking about starting a tribute band? Are you wondering what to expect on the path ahead?

In this episode of The New Music Industry Podcast, I share what I’ve learned from performing with a tribute band for nearly a decade.

At this point, I’ve been performing with a tribute act for several years.

It’s a bit of a feast or famine situation because sometimes we have a lot of gigs, and at other times we don’t have any. This means I generally have plenty of time to work on other projects.

But when we do perform, I usually have a lot of fun.

Over the years, I’ve come to recognize there are both upsides and downsides to playing in a tribute band. So, I thought I would share these with you.

First, let’s look at the upsides to playing in a tribute band.

1. You Can Command a High Fee

It’s a good day when you get paid for your performance as an original act. I’m not saying it’s impossible to get paid for your gigs if you’re performing original material. But for the most part, the fee structure hasn’t changed in decades. These days, some bands even pay to play.

This is where cover and tribute bands have certain advantages. Generally, you can command a higher fee out the gate. Since there’s a built-in audience for the music, it isn’t as challenging to attract an audience, and most music venues know this.

But there is a downside here in that there is a limit to how much a cover or tribute band can earn in one go. Meanwhile, there is virtually unlimited earning potential as an original act. Getting to the point where you can earn more can take a long time, mind you.

2. You Can Perform for More People

This goes hand in hand with the last point I made. Since the music you’re performing already has a built-in audience, drawing a crowd generally isn’t a problem. You might not have a huge audience every time you perform, as it’s still contingent on the marketing that goes into it, but for the most part you’ll find yourself performing for more people than a new original act.

Additionally, what I said about payment also applies to audience. As a tribute act, there will always be an upper limit to the number of people you can play to. As an original act, you can keep playing to bigger and bigger audiences assuming there’s still room for growth. Again, getting to that point could take you a long time though.

3. You Get to Grow as a Musician

As a singer-songwriter and rock musician, playing in a tribute band is a side gig for me. It was never meant to replace my other musical projects or even other work.

But when I started learning the material for the tribute band, it took a lot of time and effort to figure out. It wasn’t the most technical music I’d ever played, but the arrangements were a lot weirder than anticipated. So, it took me a while to wrap my head around the arrangements.

As I went through that process, I ended up growing a lot as a musician. I had to figure out how to sing over complex guitar parts. I had to learn both the bass lines and the guitar riffs. I had to learn and employ new techniques.

When you grow as a musician in a tribute act, you can apply what you’ve learned to your original music, which is a significant benefit.

As a musician, you can apply what you learn in one project and apply it to another. Click To Tweet

Now, let’s look at the downsides to playing in a tribute band.

1. You’ll Never be as Big as the Original Band or Artist

More than likely, you’ll be starting a tribute band around a popular act like The Beatles, AC/DC, Def Leppard, Led Zeppelin, Van Halen, KISS and so on.

This isn’t to suggest you can’t start a tribute band around a more modern artist. But then, the catalog to draw from could be limited, and so could your audience.

Certainly, there are still plenty of fans of the bands already mentioned. But there’s no way you’re going to draw the kind of audience they did or still do.

Some tribute bands do end up playing big theaters or even stadiums. But that’s usually only possible if your band sounds amazing and you’re able to team up with another popular tribute act or two.

2. You’ll Likely be on the Receiving End of Criticism

I’ve seen all kinds of criticism lodged against the tribute band I’ve performed with.

So, if you want to start a tribute band, be prepared for critics. I don’t know why, but some people think they’re going to get the real deal when they’ve paid 1/10 the price of a ticket they would for the band you’re emulating. It’s like Kijiji users who assume they can negotiate on everything even if it’s already been significantly marked down in price.

3. Your Merchandising Opportunities Are Somewhat Limited

The band or artist you’re paying tribute to has already recorded all the albums, filmed all the DVDs, sold all the T-shirts, and so on.

This isn’t to suggest you can’t record cover versions of their songs, and certainly, you can make your own T-shirts too, assuming you aren’t just lifting other people’s designs and making them your own. Please don’t violate any copyrights.

Basically, if you want to record music and sell merch as a tribute act, you’ll need to get creative. It’s not that you can’t have merch, it’s just that you’re going to be a little limited in what you can do.

If you want your tribute band to be more than just a side gig, you’ll want to put as much time and effort into it as you possibly can. You’ll want to spend a good amount of time in rehearsal getting your look and sound figured out. You’ll want to find as many venues you can to perform at and get your marketing down to a science.

And, above all, you should have a passion for the music you’re performing. Otherwise, you might give up when the going gets tough.

No matter what type of band you choose to start, there are both pros and cons to each. But if you’re thinking about starting a tribute band, you should be aware of what I shared in this episode.

Did I miss anything? Are there other upsides and downsides you can think of?

I look forward to seeing your comments in the show notes.