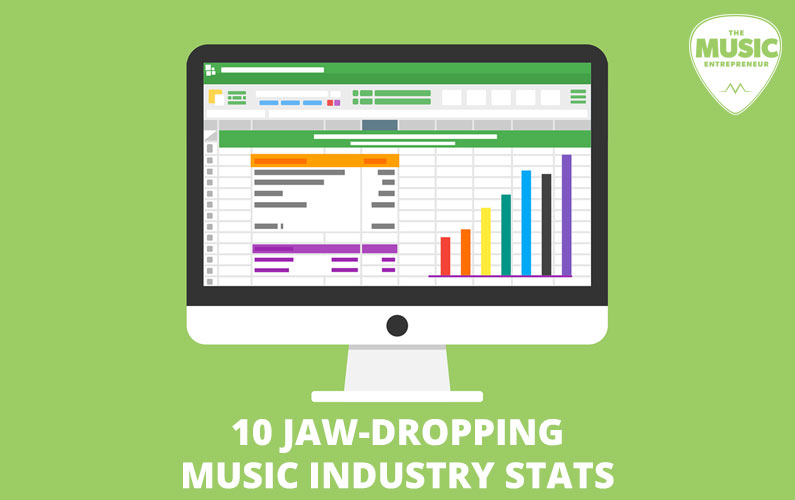 Summary: The music industry isn’t the most transparent. If you go looking for stats on marketing, they’re easy to find. But stats on the music industry aren’t so easy to come by. Still, there are some surprising stats out there. This post features 10.

The music industry is a bit of an enigma.

There isn’t necessarily a reliable way to get hold of the latest stats and studies about the industry. Every year, we hear about revenue numbers as well as growth in streaming and vinyl sales, but other stats, like the number of active musicians in North America, are tougher to nail down.

Still, I decided to curate fascinating stats I found across the web. In this post, you’ll find 10 stats that just might cause your jaw to drop.

Note: Some of these stats are not up-to-date, again showing that the music sector is difficult to pin down. But I don’t think there’s anything older than 2012 here.

If you aren’t in the top 1%, you’re not making the big bucks from recorded music. But arguably, even the top 1% aren’t earning a ton, because of what record labels keep. Imogen Heap, for example, says she only keeps 18% of the total money generated from her music. And that was after negotiating for a better deal.

The average musician only earns 6% from sound recordings. (SSRN)

Other revenue streams, such as touring and live performance (28%), teaching (22%), and salary as an employee of a symphony, band or ensemble (19%) represent the most lucrative income streams for the average musician

What this stat shows is that the recording industry is on a growth curve. From 2010 to 2015, revenues have grown by 4x.

Streaming continues to increase in popularity, but I don’t believe it’s hit critical mass yet. We’ve still got a way to go.

The median pay for musicians and singers in 2015 was $24.20 per hour. (Bureau of Labor Statistics)

On the surface, that seems like good pay, but unfortunately, we have no idea how many hours most musicians and singers are working. My guess – many are not full-time.

So, your parents weren’t wrong when they said your odds at success in music were less than 1%. But that depends on what your goals are, and what your definition of success is.

15% of artists only sell one album per year, 82% are unsigned, 33% never sell any albums at shows, and 24% of musicians have mailing lists that have less than 50 subscribers. (Music Marketing Manifesto)

Note: These percentages represent the majority in each category. In other words, the 15% of artists who only sell one album per year represent the largest segment of the graph. The same is true of the 33% and 24%. 10,000 musicians were surveyed in this study.

There is still plenty of room for growth in the music streaming market, and I believe we will see it hit some of the highest levels in the next few years. Music consumption also remains high, and the most convenient way for people to access all the music they want is with streaming services.

Just as I said in my book, The New Music Industry: Adapting, Growing, and Thriving in The Information Age, vinyl sales continue on a growth curve. It’s still a small portion of the $15 billion recording industry, but it also isn’t just a blip on the radar anymore.

Live music is showing steady growth year over year. But is this because bands in the top 9.3% (artists who aren’t in the “undiscovered” category from earlier) will be charging more from their concerts, or does it represent growth in the number of artists and bands earning from live music? Since Statista calls this a “music industry” report, I imagine revenue from independent music hasn’t been factored in.

How do these stats make you feel as a music entrepreneur? What do you think will happen next?

Let me know in the comments below!