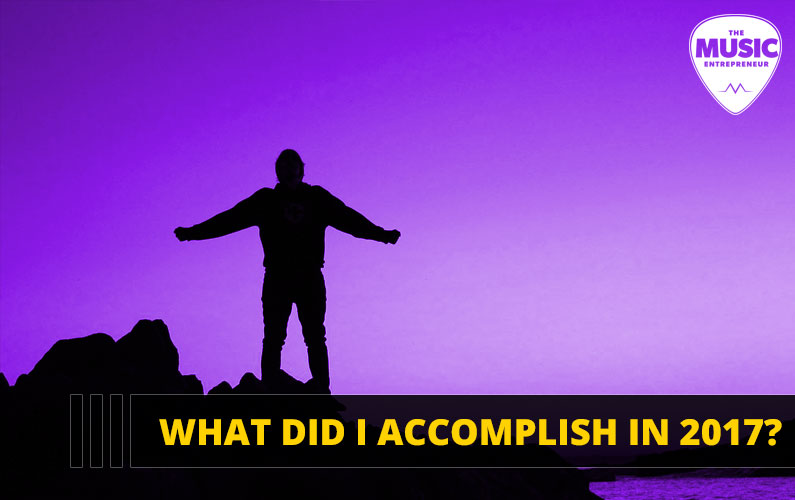 When you make huge leaps forward in your life, you feel exhilarated.

But if you end up looking back on those achievements and compare them to your present reality, you could feel discouraged depending on the amount of progress you feel you’ve made.

So, it’s important to celebrate every victory, no matter how big or small we feel it was.

In this episode of The New Music Industry Podcast, I share what I feel I accomplished in 2017.

As I think back on 2016, I recognize that one of my biggest achievements was going from working several jobs at several locations to becoming a full-time work-from-home freelancer and entrepreneur.

Prior to that, I had been working as a guitar instructor, theatre technician, and freelance writer. By summer 2016, my ghostwriting and freelance writing work had taken off to the point where I didn’t feel I needed the other off-site work anymore.

As exciting as these changes were, it was a bit scary going from working in several capacities to narrowing my focus to one thing. But if that hadn’t worked out, I may not be sitting here sharing these insights with you on the podcast today.

So, recently I gave some thought as to what I had accomplished in 2017. At first, I didn’t feel like it was quite the standout year 2016 was. I encountered many challenges and went through a great deal of growth in 2017, especially in my personal life, but because of that, my revenue numbers suffered compared to 2016.

As I reflected, however, I realized that revenue figures aren’t everything. I still accomplished a great deal that I’m proud of last year.

So, here are three things I accomplished in 2017.

Many of us get into business because of the freedom it offers.

I love what Christopher Sutton of Musical U said in episode 68 of the podcast:

…as an entrepreneur, you have incredible freedom from day one and you can increase that over time as your business grows and becomes more successful.

When you think “freedom” as an entrepreneur, what comes to mind is probably the laptop lifestyle. The ability to go anywhere you want, and work from any beach you want across the world.

I’ve probably been able to live that type of lifestyle since 2016, since my work was no longer tied to a physical location. I probably had enough freelancing income to do it even a year prior to that.

There are reasons why I didn’t do that. For one, I had – and still have – several collaborative projects I work on with people I respect and admire in Calgary. For another, I had lost sight of anything outside of work between 2014 and the first half of 2017. My life was work, as I’ve shared in earlier podcast episodes. That meant it didn’t matter a whole lot where I was in the world, because I hardly interacted with anyone.

I had some vague notion of visiting Japan in 2017, and I knew I couldn’t delay that trip any longer because I had been thinking about it for a couple of years, but I had no idea just how vital that experience would be for me. Most of the year appeared to be going along smoothly, at least until June. More on that in a second.

Prior to leaving for Japan, I was sick and burnt out, and barely able to function. I was beat up in virtually every capacity – physically, emotionally, mentally, and spiritually. I’ll talk more about burnout in a future podcast episode.

So, going back to what I was saying about June. I was already nearing burnout at that stage. I would catch myself working straight through the day, getting up only to go to the washroom, make meals, and walk the dog. I would end my days at 10, 11, or 12 at night, with barely any time left to wind down before going to bed and starting the same cycle all over again.

That’s when a friend interrupted my life and changed it for the better. She started taking me out on adventures and showing me that there is a life outside of work. She drew things out of me that were probably always there, but I had simply forgotten or shoved down. I felt like I was going through personal transformation.

In ensuing months, I ended up taking liberties and exercising quite a bit of freedom. And, to some extent, that has carried over into the New Year.

I also took breaks. I went on a weekend trip to British Columbia with another friend in August. I went to Chase, BC for a week the same month. Then, in November, I finally got to make a return trip to Japan after 14 years of not visiting.

These events, however, were planned. I didn’t just wake up one day and say to myself, “I should go to Japan next month”. I had been planning for these trips, because I knew I had failed at taking proper breaks in years prior, despite my best intentions.

There is greater freedom to be had, and I’m in pursuit of that. But I’m glad I took some time out to “rebalance my life” in 2017.

The Music Entrepreneur HQ has been a passion project of mine for many years.

I’ve built lot of other niche websites and blogs over the years, but after I started seeing some traction with this project idea, I decided to dedicate more time to it, and even redirected many of my other domain names to The Music Entrepreneur HQ.

I think writing and publishing my book had something to do with that decision as well. Out of any product I had ever created online, including music, other courses and eBooks, the one that consistently drove revenue was the book.

I may be driven and prolific, but I don’t think I could have written books for all my blogs and websites. And, it’s possible I would have had to do that to drive income from those sites as well.

I had to make some tough decisions about what I wanted to focus on, but with my email list and traffic at The Music Entrepreneur HQ growing, it seemed like a no brainer to continue to add value to the world through this channel. And, as you’ve surely discovered, I’ve been sharing about a lot of things that you wouldn’t typically find on a music blog.

Despite having a few sources of revenue, up until recently, I wasn’t entirely sure what my business model was. After spending some time in Japan reflecting and letting my thoughts simmer, I finally achieved clarity around what The Music Entrepreneur HQ was and could be.

As you can imagine, that makes it a lot easier for me to know what to focus on moving forward. And, gradually, after the whirlwind events of 2017, I’m finding my focus and determination again. Being in a new environment certainly helps – I feel happier, more creative, and more energetic in my new home.

It’s time to take this business above and beyond!

I had set the intention to focus on my health in 2017. I’ve already shared quite a bit about this in episode 79 of the podcast.

This was important to me, because I felt my workouts in 2016 weren’t yielding results, and in some ways, I was beginning to feel worse off physically. I knew I had to make different decisions in 2017.

Having set that intention, I was surprised to find the universe presenting me with new opportunities to care for my wellbeing.

One friend asked if I wanted to work out with him, and showed me how to eat healthier. Another took me to hot yoga a couple of times, and sometimes went on walks with me. Yet another told me about humic and fulvic acids, and how these liquids could help with gut health and clarity of mind.

During the summer, I was incredibly restless and went on a lot of walks, both during the day, and oftentimes at night. I loved those late-night walks, despite how unbalanced I was feeling emotionally while on them. It gave me time to process my thoughts, and I felt like those walks brought a lot of clarity to my life.

I wouldn’t say I’ve achieved all my health and fitness goals. But I have more energy, I’ve gained muscle mass, toned up, and cut fat. That’s the direction I want to continue towards in 2018.

Some friends have commented on the many changes I’ve gone through physically, and it inspires me to push ahead.

If I had kept up the crazy schedule I was living in the first half of the year, I might be in the hospital and not sitting here and sharing my journey with you as I am today.

If I hadn’t set the intention to become healthier and to grow as an individual, likewise that could have led to some poor choices and unwanted consequences.

I needed to change, and I had set the intention to do exactly that. But it’s almost as if the universe had to shake me awake before I was willing to do anything about it. I didn’t know what steps to take, and I needed the help of some friends to show me.

2017 was difficult, but I believe I will remember it fondly. Now, it’s 2018, and my life is changing again. I look forward to the journey and adventures ahead.