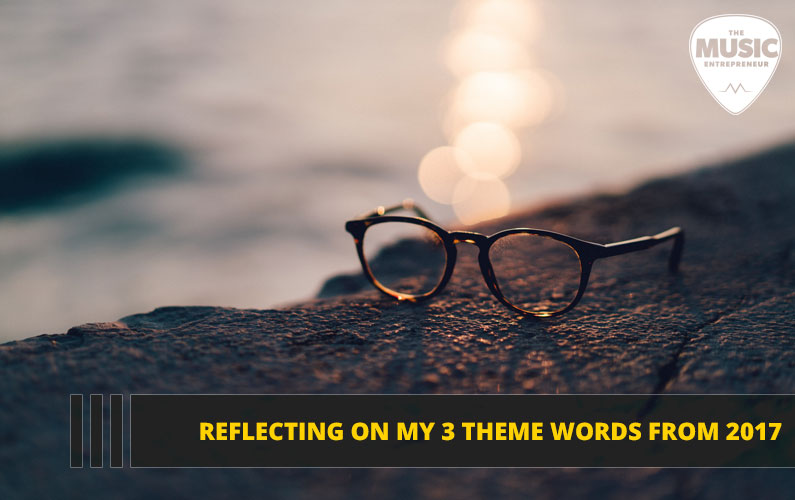 Every year, I live my life by three guiding words. These words help me make decisions that are aligned with my vision and cause me to stretch beyond my comfort zone.

In this episode of The New Music Industry Podcast, I reflect on my three theme words from 2017, and share my theme words for 2018.

This is a common question to ask this time of year.

And yet, the thing that I’ve found the most value in over the last few years is setting three theme words for the year instead of setting goals or resolutions.

I’ve found that these words can set the intention for the year, and if you keep them out in front of you where you can look at them and contemplate them regularly, you’ll be reminded of what’s important to you and what you’re looking to achieve that year.

If you set your intentions for the year and keep them in front of you, you'll be reminded of what's important to you and what you're looking to achieve. Click To Tweet

You’ll find that people, circumstances, and events line up in unexpected and beautiful ways. Fresh opportunities will come your way if you remain open to the possibilities.

Setting theme words for the year is an idea I got from Chris Brogan, CEO of Owner Media Group. Since 2015, it has become a yearly practice for me, though I admit I almost gave up on last year. I’m glad I didn’t.

If you’ve never done this before, I would suggest giving it a try. And, maybe the stories I’m about to share will inspire you to do just that.

So, here are my three theme words from 2017, and what happened as result of holding these intentions for a year.

I admit there was a lack of adventure in my life from 2014 all the way to the first half of 2017. That’s probably why I wanted to set “adventure” as one of my theme words for the year.

This is what I said in last year’s blog post about adventure:

Life can be too much “business as usual”. I’ve got to do things that make me come alive, and that means doing some things that might scare me.

I already talked about how I made some new friends in 2017, and that played a significant role in bringing about fresh experiences.

I know that a lot of you follow me on social media, and often comment on what I’m sharing, usually in person, including photos of the trips I’ve been taking and the blog posts I’ve been writing.

I’ve already mentioned a few times on the podcast that I spent a week in Chase, BC in August. One friend commented how he thought it was interesting that I approached my experiences there as though they were entirely new, even though they weren’t.

That’s the approach I took the entire summer. Sure, I’ve been to BC before, but I think it’s one of the first trips I’ve ever taken alone. So, the difference was that I got to experience everything for myself.

Many of my other adventures during the summer, and even fall months were driven by a new friend I had made, but I was also intentional about getting out into nature alone.

The most significant adventure was that of returning to Japan after 14 years for two weeks in November. It’s almost as if that trip was tailor-made for me, as I could never have planned for everything that followed. It was incredible.

My desire for adventure was fulfilled in many ways in 2017, and I plan to continue exploring in 2018, even if I don’t go overseas.

I was just beginning to collaborate with more people at the end of 2016.

There’s nothing wrong with working alone, and since I’m in a creative industry, most of my work must be done in solitude, or at least somewhere I can concentrate on my work, such as at a coffee shop or a library.

Last year, this is what I said about collaboration:

In the first half of the year, I worked with Maveen Kaura on publishing podcast episodes for Using Your Power. There are reasons why things started to slow down a bit in July, but I’m certain we’re going to get back into a regular schedule in 2018. Maveen and I also collaborated on a successful crowdfunding campaign and an independent radio campaign.

As far as guest posts, interviews, and podcast discussions go, plenty of opportunities came my way.

You may be surprised to find that I’m not entirely hands-on with the guest programming for The New Music Industry Podcast. Typically, people will send requests my way, and I will decide whether I want them on the show.

This isn’t to suggest there aren’t people I haven’t hand-selected or want to talk to, but lining up, preparing for, and publishing those interviews can be hard work. I’m glad I decided to interview many of the individuals that approached me, because I think some great content came as result, and I got to talk to some cool people.

People also approached me about being featured on their blog and interviewed on their podcast. I cherished those opportunities.

I also enjoyed being a part of a couple of communities – The Listening Room YYC and The Question, and got to collaborate with some people I have a lot of respect for.

Here’s what I said about health last year:

It’s time to get into a steady routine of eating well, exercising, and taking supplements to help me achieve optimal health.

That’s a great description for what happened in 2017.

For whatever reason, I didn’t have much success becoming healthier in 2016. I tried to walk more – anywhere from 8,000 to 10,000 steps per day – but that didn’t appear to be producing results in how I looked or felt.

I know now that I had to make some dietary adjustments. But in 2017, it all started with working out regularly. I had an invitation from a friend to work out with him at the gym, and I said I would join him. I was in for quite the surprise when, after our first upper body workout, I could barely lift my arms or sleep properly for nearly a week because I was so sore!

He also filled me in on what and what not to eat. I changed my diet gradually, and by the end of 2017, I had almost completely moved over to an organic diet.

I had another friend tell me about fulvic and humic acids. The verdict is still out on these, so I’m not necessarily suggesting you take them yourself, but I felt I was presented with another important opportunity to become healthier when I learned about these liquids, so I took it.

Through the summer, I went on a lot of walks, and tried hot yoga a couple of times.

I stopped drinking energy drinks by spring, because in the early part of the year, I was struggling a lot with anxiety and didn’t know why. As it turns out, it was probably a combination of caffeine and chemicals that can be found in energy drinks. Cutting that out of my diet hasn’t eliminated anxiety, but it’s rarely a major problem now.

I set the intention, and the avenues for betterment presented themselves.

I was in love with my theme words from 2017, because of what manifested, and how things changed for the better.

But this is a new year, and circumstances are already different than they were in December.

So, I was dragging my feet a bit in coming up with my next theme words, but I finally decided to write them down, so I could bring my focus to the present moment.

This theme word came to me while I was in Japan. One of my favorite bands right now is Disciple, and I first came to love their music in summer 2017, though I had been aware of them for several years. One day I realized how they use violent imagery and lyrics in their music, and I thought to myself, “war”.

People sometimes call me “passive”. Usually, what they’re referring to is my laid-back, easygoing personality, not my work ethic. If you’ve seen the amount of work I produce and the effort I put into it, I don’t think you could refer to me as passive.

But up until June 2017, I had relegated fun to the universe, because I didn’t feel as though there was anything enjoyable out there. I had given up on the notion of connection, and even romance, and unfortunately, I may have made people the enemy in my loneliness and resignation, most of which I decided not to acknowledge any longer.

But in 2017, my heart started to open again, and I allowed myself to feel and to want what I wanted. This did lead to some heartbreak, but it didn’t shake my belief in myself. If anything, it affirmed that I was far more capable and resilient than I thought I was. I became a far more confident individual.

In a way, I’ve substituted “collaboration” for “connection”.

Collaboration implies you’ll be working with others. Connection has a similar connotation to it.

I desire deeper connections. I want to build a support group. I want to be proactive in reaching out and connecting with others. I also want to share valuable and worthwhile messages with others.

So, I’m looking forward to making lasting and valuable connections this year.

Even though I’m reeling a bit from the sudden changes that transpired, I’m excited for what 2018 will bring, because I know I will continue to grow and experience new things.