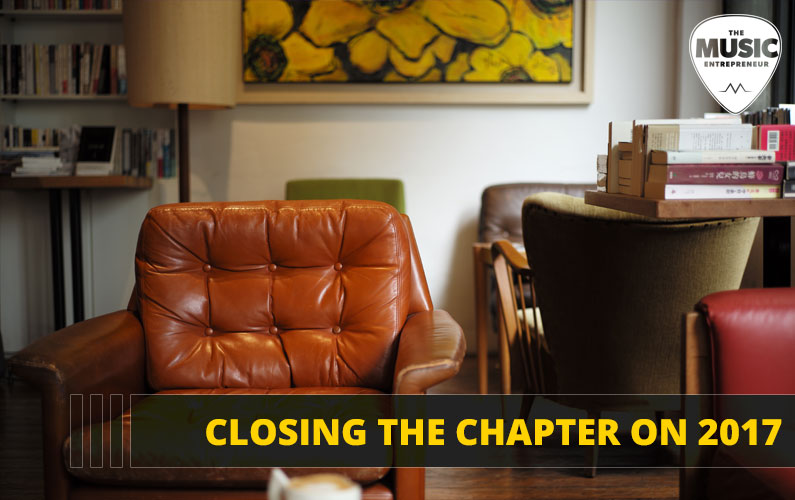 Dragging your last year into your New Year is a bad idea. You may have emotions, thoughts, and ideas that need to be processed, and if you leave those stones unturned, you’ll feel mentally and emotionally cluttered heading into the New Year.

In this episode of The New Music Industry Podcast, I close the chapter on 2017, and share what happened through the year.

In my life, there was quite a bit of push and pull. Not just at the gym, but also in terms of how I experienced time.

Albert Einstein has been quoted as saying:

Time is relative; its only worth depends on what we do as it’s passing.

I can’t even begin to unpack the depths of what that truly means. What I can share with you is that my life slowed to a crawl during the summer months, and quickly picked up afterwards. It was strange.

My summer was a life-defining one, and has had a huge impact on who and where I am today.

I made some excellent memories in 2017, but I’m still excited to close the chapter on it because I’m looking forward to what 2018 brings.

So, as with last year, I will be following Michael Hyatt’s process for closing the chapter on another year. It doesn’t make sense to drag your last year into the new one, so we must take adequate time to process our experiences.

Here are the seven questions he asks himself, the same ones I will be asking myself:

Without further ado, here are my answers.

My Answers to the 7 Questions

1. If the last year were a movie in your life, what would the genre be?

2. What were the two or three major themes that kept recurring?

3. What did you accomplish this year that you are most proud of?

4. What do you feel you should have been acknowledged for but weren’t?

5. What disappointments did you experience this past year?

6. What was missing from last year as you look back?

7. What were the major life-lessons you learned this past year?

What a ride. When I first started closing the chapter on the year in 2014, I’m not sure I had much to process or say. That’s clearly been changing fast.

My theme words meant a great deal to me last year compared to other years too. That’s another reflection for another time.

Have you taken the time to close the chapter on 2017? What did you learn, and how did you grow?

Filed Under: Podcast Tagged With: Compuxor, Listening Room YYC, The Question, Waves, your eyes give it away