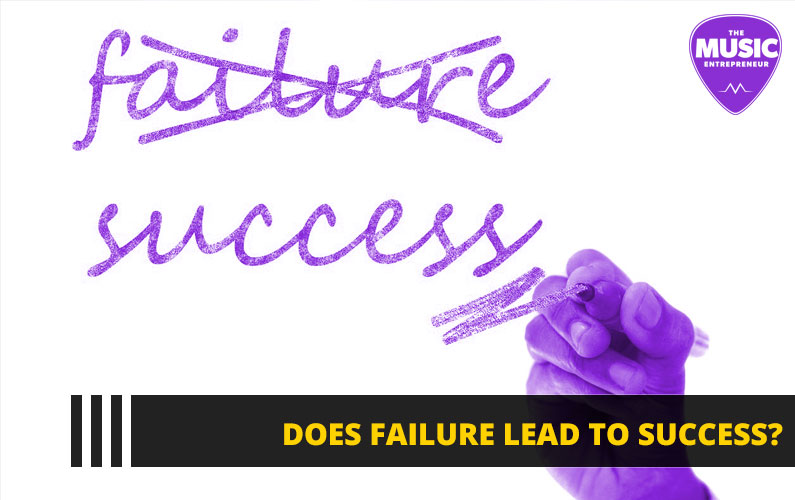 Virtually everyone fails at one time or another, whether we like to admit it or not.

So, it’s not a question of whether you will fail, but rather how you handle that failure that matters.

In this episode of The New Music Industry Podcast, I explore whether failure leads to success.

When it comes to failing, there are many different thought processes out there.

Other says, “take the shortest path to success and don’t fail unnecessarily”.

And yet others, like leadership expert John C. Maxwell says we should learn to fail forward. What he’s saying is that since failure is inevitable, it’s how you deal with it that matters. We will fail at times, no matter how much effort we put into avoiding it, so we need to build a better relationship with failure.

Last week, I just got back from a two-week vacation to Japan. I’m not going to say too much about that right now, but it was an incredible trip.

I have several takeaways from my trip to Japan, many of which I hope to share with you in upcoming episodes.

I grew up in Japan, so my Japanese was still pretty good. But while I didn’t have any trouble reading, writing, and understanding what others were saying, I had a hard time expressing and communicating my own thoughts. I would often stumble over words and got lost in my head.

As someone who’s refined his skills as a communicator throughout the years, it’s difficult looking back on that experience. I realized I didn’t want to repeat that mistake again. I wanted to make sure that I could communicate just as clearly and eloquently in Japanese as I could in English.

This year, I knew I would be traveling to Japan. That’s why I decided to start preparing early.

My process for preparing was straightforward. I spent a lot of time watching Japanese TV this year. This helped me get a sense of how native people expressed themselves and handled questions. As I observed, ideas on how to express myself began to form in my mind.

I also realized that I was probably overcomplicating things in 2003. I decided to find ways of simplifying my speech.

One of the challenges of having become an adult in Canada is that I never experienced what it was like to work in Japan. Therefore, I never learned to say job titles, jargon connected to specific jobs and industries, and other work-related lingo in Japanese.

What did I do? I looked up as many words connected to my profession as I could in advance. If I could explain my work to someone – and believe me, that’s hard enough in English let alone Japanese – then all other aspects of conversation would be a breeze by comparison.

So, based on what I’ve just told you, how do you think I fared in Japan this time?

Much to my delight, my friends were surprised at how fluidly I still spoke their language. Naturally, this did not happen by accident, but rather by design. I have put some effort into keeping up my Japanese over the years.

But a new friend of mine even commented that he felt like he was talking to a native when speaking with me. Although he never knew me as a kid, there still isn’t a higher compliment that could be paid.

And, to be fair, I’m still very much Japanese on the inside, though I look Canadian on the outside.

Why do I share this story with you? Because I realized it says something important about failure.

What I realized – at least for me – is that failure does lead to success.

If you’ve been around me long enough, you’ve probably heard me say something along the lines of, “I make as many mistakes as I possibly can upfront, so by the time I need to do the same task a second or third time, I’ll be well-versed in what not to do”.

As I reflect on my experiences, this has proven true. I think the problem is that many of us just don’t want to make mistakes. We worry. We’re concerned about who’s watching and what they will think when we stumble.

I’ve been in many situations where I could have worried about what people thought. One time, I was helping set up for a music event, and one of the hosts even said to me, as I was messing up, “isn’t this something that should be in your wheelhouse?”

Absolutely it should have been. But in that moment, I realized something about my process. I recognized that messing up in every conceivable way was my way of handling failure. If I made all the mistakes upfront, I wouldn’t need to make them again. I would be prepared for the next time I had to carry out the same task.

For better or for worse, failure isn’t something we can avoid. If you can chart a course to success that doesn’t involve failure, by all means do so! But I think that’s wishful thinking. I think you will encounter challenges along the way. I think you will make some wrong decisions.

Nevertheless, I do believe that it’s what you do with the failure that matters. It’s how you handle it and think about it that makes all the difference. If you aren’t willing to fail, then you probably aren’t risking enough. You need to take bigger chances to enjoy the level of success you desire.

You are doing the best you can with what you know and what you have right now. The only way to do better is to realize you can do better. This involves breaking through the fear of failure.

The only way to do better is to break through the fear of failure. Click To Tweet