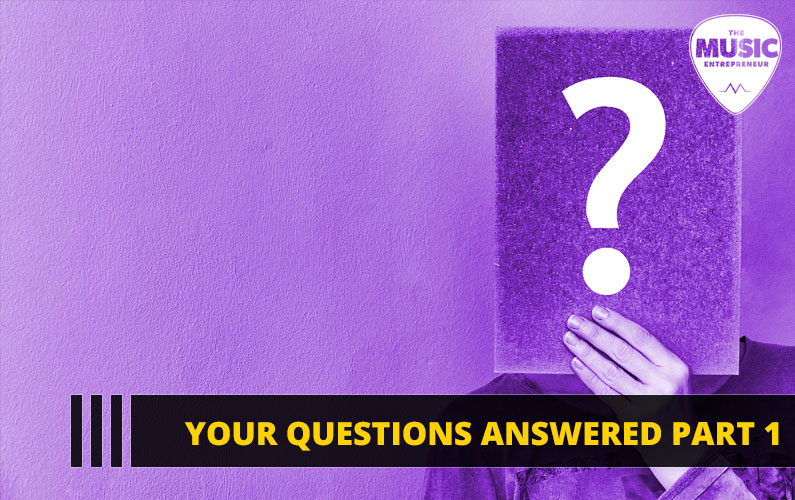 I recently received a few general questions regarding music and the music industry.

In this episode of The New Music Industry Podcast, I field four questions that came through my email, and offer my own perspective on the subject matter.

Thanks for joining me. A few of you recently sent some questions through email so I thought I would take this opportunity to answer them. Feel free to send over other questions to david@dawcast.com. It’s d-a-w-c-a-s-t dot com. I’ll be happy to answer them for you if I’m able.

The first question I had is…

What makes someone a great musician?

What makes someone a great musician is highly subjective and often depends on the person being asked. Some might say a great musician is someone who is talented, but even the definition of talent has become elusive and less clear as our attention is dominated by Top 40 music. I know a lot of people that would hear someone on the radio and go, “Wow! They are so talented!” But technically they may not be doing anything impressive. The songwriting may not be inspired in any way.

Some say a great musician is someone who’s original. Someone who can put their own spin on a topic or lyrical idea. Or someone who’s musical ideas are outside the box. Whether it’s a great songwriter like Elvis Costello, or somebody who is always a little bit ahead of the times like David Bowie, some people would point at these types of musicians as being great.

And still, some might say a great musician is someone who’s gained a lot of experience through the years. Someone who’s played on a lot of tours and recorded a lot of albums. Think of Bruce Springsteen for example.

As I was mentioning earlier, a lot of people would say that a great musician is just someone who they enjoy listening to, whether it’s Justin Bieber or Taylor Swift.

Now, ultimately, it’s hard to say what a great musician is. I think I already pointed out the fact that it’s pretty subjective, but I think a few things are clear. One, you must be making and publishing music to be great. Two, you must continually work on your music and strive to improve. Three, you must play to your strengths and identify what’s unique about you and look for ways to emphasize that through your music.

I was also asked:

How can you evoke an emotional response with your singing?

I would suggest starting by developing your vocal ability. You don’t need to be the best vocalist in the world to evoke emotion, but you can’t be a slouch either. So, if you aren’t much of a singer yet, you should probably start there.

Working with a vocal coach could help you find your voice faster and improve as a singer. Then, you’ll either need to write or pick a song that naturally moves people. Writing is obviously the harder alternative here. The song itself should be about a feeling or an experience that many people can easily relate to whether it’s love, heartache, new life, tragedy or something else.

The subject matter is really important, because people will only latch onto what they can relate to. This isn’t to suggest that people can’t find beauty in a song that doesn’t make total sense to them. But usually it’s something about the melody, or the hook, or the chord progression that brings out an emotional response in that situation.

When you go to sing the song, it needs to come from your heart. The better you can relate to the emotion of the song, the better able you will be to deliver it with feeling. That’s really the trick here. You need to deliver with feeling.

If you want to evoke emotion with your singing, deliver the song with feeling. Click To Tweet

Now, it’s so easy to say those three words, but it isn’t necessarily easy to do. This means the mechanics of performing the song should be second nature already. What you want to be able to do is tap into the deepfelt emotion of the song and bring that out for your audience.

So, first you just need to be able to sing the song without even thinking about it. Then it becomes much easier for you to think about other things, such as the emotion that you’re looking to put into it.

The third question is:

What is a music producer?

A music producer or record producer is someone that carries quite a bit of responsibility in the studio and recording process, but their exact job description can vary from project to project. So, even though I’m going to be talking about some of the duties, it doesn’t mean that they are always doing all of these things every single time.

At times, producers help come up with musical ideas and will even co-write if called upon. Producers will also help the artist improve their songs. Producers sometimes have a hand in the musical direction of the project including the song selection process. Producers will sometimes find session musicians for the album and will also work hard to bring the best out of the musicians performing on the album. A producer may supervise the entire recording project starting in pre-production all the way to the mastering. This is often what comes to mind when I think of a producer. They are helping to shape and mold the sound of the album. A producer may also provide funding for the project. These are some of the responsibilities of a music producer, but depending on the project, more or less will be required of them.

I also had someone ask…

What does networking mean?

When I talk about networking, usually I am referring to building worthwhile strategic relationships to advance your music career. In other words, meeting people. I believe networking is difficult when you’re trying to get something from someone, but when you focus on the other person and their needs, it tends to work a lot better.

Networking can be done just about anywhere. If you’re asking yourself where to find people, all you need to do is look outside your window. You can also attend networking events, trade shows, industry conferences, meetups, open mics, other people’s performances, and a variety of other places to meet people.

I understand that putting yourself out there can be difficult. You need to be patient with yourself, set small goals and gradually get better.

Even I can be shy at times. There was a time when literally all I did was go up to one person and say “Hi” to them every single day. Eventually, that developed into multi-sentence conversations and I even got to the point where I talked to more than five people a day, and even had longer conversations with them.

As you’re out and about, you’re going to meet a lot of different types of people, and some of them will benefit you and will help you and become friends, and some will not. But never underestimate anyone, because they may become your next best friend, client, collaborator, investor, or any number of other things down the line. You simply just don’t know.

I hope you found this valuable. If you have any other questions, feel free to send them my way.