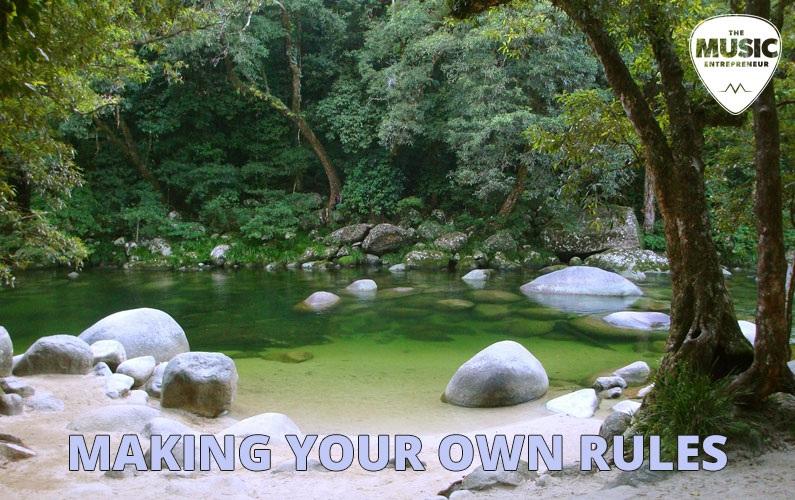 If you don’t feel like you’re making progress in your career, you have no one to blame but yourself. Perhaps you haven’t even thought about what you’re trying to accomplish, or what steps you need to take to get there. The best way to make steady progress? Make your own rules.

In this episode of The New Music Industry Podcast, I explain how you can set your own rules, and the benefits of doing so. 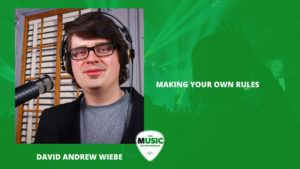 Thanks for joining me. Today I wanted to talk about making your own rules, because I think some people out there are discouraged by the progress they’re making or not making in their music careers.

For example, if you want to be signed to a record label, obviously, a win for you would mean getting a contract offer. But you could set your sights a lot lower if you wanted to. There’s nothing wrong with that. It’s up to you.

You can have small goals, and you can have big goals if that’s what you choose to do. And you must be the one measuring against your own rules that you’ve made to play the game.

My first point is that you are your harshest critic. When you put out a new product into the world, whether it’s an eBook, or a new single, EP, or album, you know everything that’s wrong with it because you were involved in the production process.

Whether it was your guitar playing being a little bit out of time, your vocals being pitchy, or the drums not totally in sync with the rest of the band. But when your fans go and listen to it, they might not even notice some of those things.

More often than not, if you go back and listen to some of the recordings that came from the 60s and 70s, there was a lot of live recording off the floor. And there are some amazing recordings from back then, but there are also many flaws. Some of them were even covered up by instruments. Even The Beatles had songs like that, sections where they played the wrong chord and they covered it up with a bunch of horns and things like that.

So, it’s just good to be aware that no one will be as harsh as you are. You are your worst critic.

Second, setting your own rules makes it easier for you to win, and success breeds success. So, when you begin working on something, and you complete it. That’s your first win. And then you put it out into the world, and that’s another win. And, as you achieve more, your confidence will increase, and you’ll get more done.

I think setting your own rules enables you to increase your confidence continually over time, bit by bit, after every achievement and every win. That leads to momentum. Momentum leads to being more prolific and producing more, and creating more, and putting more out into the world. We want to encourage that success cycle to happen in our lives.

But if you set your goals too high and measure yourself against some of the most amazing people in the world, and you’re just getting started in your music career, or if you’re in year two or three right now, you can’t do what they did. It’s near impossible.

Making your own rules also puts you in control. I’ve talked before about ownership. You should be in control of what you accomplish, especially as a musician or business owner. You should put those parameters in place as to what it means to be successful in what you do. No one else should be telling you what that is, should they? So, take some time to think about what success would mean to you.

And if you have huge goals, then put small goals in place that allow you to reach that next level. Put those stepping stones in place. And every time you hit one of those mile markers, you’ll realize you’ve progress in your career, and that will increase your confidence.

So, making your own rules, taking ownership of it, taking responsibility of your career, increases your confidence.

So, what are your thoughts on making your own rules? Have you already made your own rules for your music career or business? Let me know. Leave a comment below, and I’ll see you next time.