023 – 7 Productive Things to do During the Holiday Season 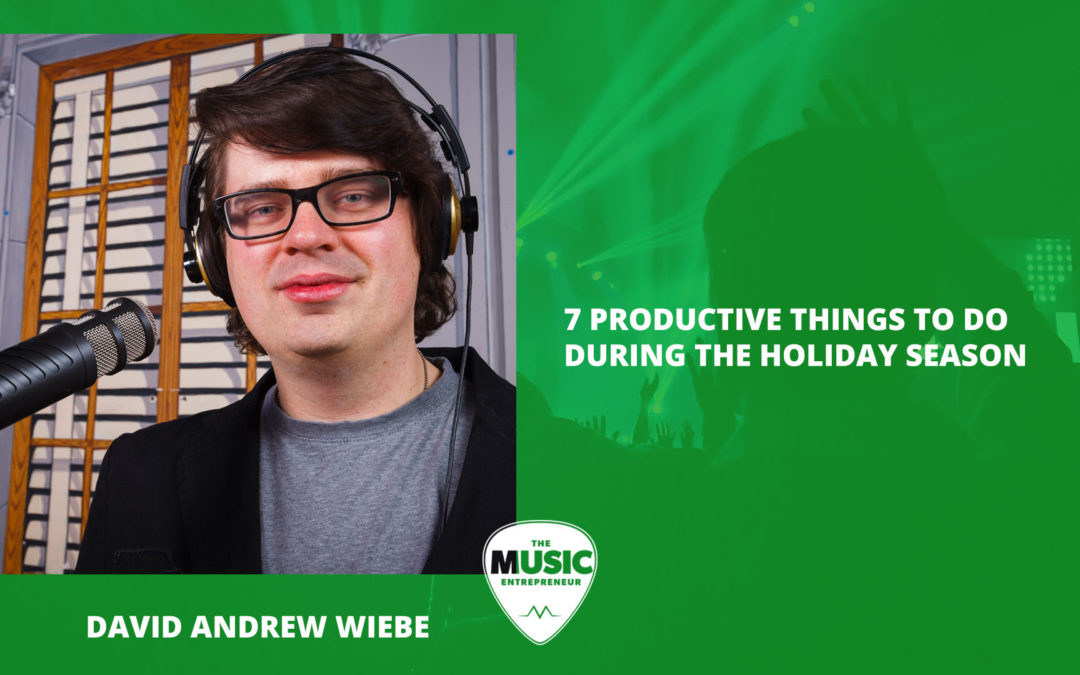 So, what are you doing to prepare for the year ahead? Have you reflected on 2016? Have you set new goals?

It can be hard to know what to do this time of year. A lot of people slow things down and kick it back for a while. Is that the best thing you could be doing, or is there a way to make better use of your time?

In this episode of The New Music Industry Podcast, I share some thoughts on end-of-year productivity.

There’s a lot of people running around, buying presents, drinking eggnog, eating lots of goodies, getting together with friends, and maybe even doing nothing. Just lounging around, watching TV, playing video games. Not that there’s anything wrong with all of those things.

But you might be asking yourself, “Is that the most productive use of my time? Should I be following suit and doing what everyone else is doing? Or, are there some other things that would be good for me to focus on?”

What is the most productive thing I could be doing during the holiday season? Click To Tweet

And if you’re asking those questions, well, you’re in the right place.

So, let’s get to point number one. All my notes are over here, so you might see me looking over there from time to time.

My first point is rest.

This may not apply to everybody. And you may even find this surprising coming out of my mouth. But if you are tired out, and burnt out, and you’ve been pushing hard for your goals all throughout the year, and you just don’t feel like you have anything left to give, that’s really not a great way to start the New Year, is it? You’re just going to drag that into 2017.

So, if that describes you, if you’re really exhausted, I would take some time to rest, get proper sleep, maybe a little exercise and laughter, and then you’ll be ready for another year and new opportunities.

My second point – I think this is good for everybody to do – is reflect.

Think about what went right, what went wrong, what were some of the lessons that you learned in 2016? Most people don’t do enough reflecting, and that’s why they don’t change or grow in anyway. So, this is something that you should definitely be doing.

Recent studies show we actually learn more from our successes than our failures. That’s the opposite from what we’re taught. So often we read quotes that say, you learn the most from your failures. But there might be some new research showing that isn’t the case. And we have a tendency to write off our successes as just mere coincidence, but there’s a lot of things that you probably did right to get to where you are, to accomplish what you did, so take some time to reflect on both. But also don’t forget to observe what you did learn from your successes.

The next thing is to archive.

So, that means you might have a lot of loose files just on your desk, and they need to be filed away into the appropriate folders. Maybe bill payments and things like that.

And the same could probably be said for your computer or your desktop. There’s just a lot of files that need to be slotted away, moved out of your consciousness so you can free up some mind space and actually have the energy and resources to focus on the things that you want to accomplish moving forward. Clutter can get in the way of that. So, this might be a good time – especially if you’re one to get distracted by those kinds of things – to start eliminating them.

The next thing is to drive.

So, if you feel like you squandered this year, and you’ve got a lot of energy left, and you feel like you’ve got more to give, this might be a good time to get some things done. And there’s still some time left before we make it to 2017, and the “holiday season” doesn’t really end until the second week of January. So, why not take this opportunity, take this chance, to accomplish some things that are still lingering on your to-do list or goal list?

The next thing is to plan.

Maybe if you have a tendency of just laying things back and doing nothing during the summer, instead of just randomly taking some time off over the course of the summer, why not just book two or three weeks in advance so everybody knows that you’re not available, and you know you’re not going to be doing anything during that time. And that way, it makes things more predictable for everyone. And so, that would be a good thing to think about.

The next thing is to set new goals.

You probably have some lingering goals or leftover goals from 2016, and you should review that list. Check off any goals that you did accomplish. Get rid of ones that are no longer relevant and don’t really matter to you anymore. And if there are some that you want to carry over into 2017, because they’re really important to you, then put them on your new list. But either way, make a new list.

And don’t set too many goals. Have only one, two, or maybe three per quarter. So up to three goals per quarter for every three months of the year. And that’ll bring you to about 10 or something like that. Maybe between seven and 10 goals, and that’s manageable.

Don’t set too many goals. Have just one, two, or maybe three per quarter. Click To Tweet

And try to live your life more in 90 day capsules as opposed to 365 days. And get things done, and drive towards getting things done in that time-frame.

Finally, take some time to purge.

This is a lot like what I was mentioning earlier. Things can pile up. You might have a lot of clutter. And these things can distract you from achieving the things that you really want to be able to do in 2017.

So, get rid of things that seem irrelevant, don’t really matter anymore. And take some time to carefully evaluate because we only have so much time. Time is a finite resource, and it’s the most important resource that you have, and you shouldn’t be dedicating any more time to projects that don’t matter to you. So, begin to prioritize and just get rid of any that don’t seem priority at this moment in time.

So, I hope this list helps you, and enjoy the holiday season.